The Range of Emotion 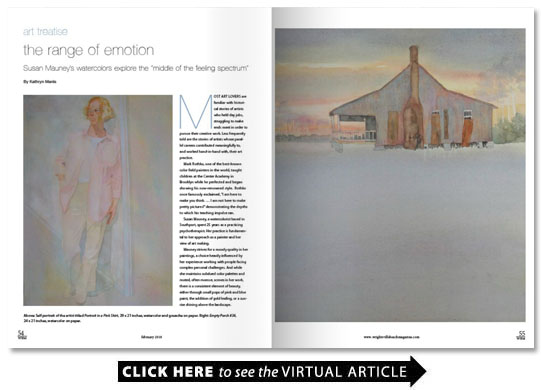 Most art lovers are familiar with historical stories of artists who held day jobs struggling to make ends meet in order to pursue their creative work. Less frequently told are the stories of artists whose parallel careers contributed meaningfully to and worked hand-in-hand with their art practice.

Mark Rothko one of the best-known color field painters in the world taught children at the Center Academy in Brooklyn while he perfected and began showing his now-renowned style. Rothko once famously exclaimed “I am here to make you think. � I am not here to make pretty pictures!” demonstrating the depths to which his teaching impulse ran.

Susan Mauney a watercolorist based in Southport spent 25 years as a practicing psychotherapist. Her practice is fundamental to her approach as a painter and her view of art making.

Mauney strives for a moody quality in her paintings a choice heavily influenced by her experience working with people facing complex personal challenges. And while she maintains subdued color palettes and muted often morose scenes in her work there is a consistent element of beauty either through small pops of pink and blue paint the addition of gold leafing or a sunrise shining above the landscape.

“As a therapist I spent all day every day talking to people about how their lives were troubled; in many cases these people had very sad and depressed lives and it was my job to help them explore and deal with that reality ” she says. “And I genuinely liked every single one of them. I never had a patient who I didn’t like or feel like was a worthwhile person even those with criminal backgrounds. When you get to know someone very well you can’t help but see their humanity whatever their story.”

An appreciation for and recognition of the nuance of human experience is especially evident in Mauney’s portrait work.

“Dear Simone” plays on the concept of the “Dear John” letter. It pictures a female subject as she receives bad news. The figure sits at a caf� table a small coffee cup in front of her. Simone holds a letter in her right hand. Her left hand trails lightly along the side of her face. Her facial features pictured in profile are severe and reflect a recognizable combination of resignation and disappointment.

Uncharacteristically for Mauney she painted Simone sitting in a bright art-filled interior in a dress heavily patterned with bright pinkish-red flowers and swirling lines in purple and green. She wears heavy gold jewelry. The figure’s clothing and environment provide a strong contrast to her dejected body language and somber expression.

“I decorated her a lot as a sort of contrast to the bad news she is getting in the letter; she is all dressed up and there is some conflict in that ” Mauney says.

Mauney prefers to work with granulated paints meaning that the pigment particles do not fully dissolve in water. This allows her to maintain the integrity of different colors while capitalizing on the medium’s capacity for blending and soft lines.

“Even when the paint is wet you can add 10 more layers and it’s not going to completely mix ” she says. “You will always be able to see individual colors; you can tilt the paper but it will always keep them separate.”

Mauney develops the backgrounds by layering water and paint from a simple palette of primary colors. Once the surface is complete she sketches her image on top and then will paint more precisely but the intuitive process of layering color and water is her favorite step.

“The best part is the beginning where you’re being really wild and throwing paint down ” she says. “If you’re working on a piece of wet paper and you put color down it may not go where you want it to. The serendipity of watercolor is especially exciting to me.”

The emotional and technical capacity of Mauney’s chosen medium is visible in other portrait works.

“Men Friends” depicts two older men sitting at a pub-style table; one looks down at his phone and the other stares absentmindedly through dark sunglasses. The surface is a hazy mix of yellow blue and red. Several layers of water and paint have been applied creating a misty blur between the picture planes that grants the otherwise simple composition a feeling of confusion or lack of clarity.

Though the title and their shared table suggest that the two men know each other they aren’t interacting. The inspiration came from a real-life scene. The irony of their physical proximity and lack of engagement is what prompted Mauney to snap a photo and recreate it in paint.

“One of the men is staring off into space and the other is looking down at his phone. To me that was a pretty humorous social commentary on male friendships ” she says. “These two men were not really relating to each other at all; they were together but still so separate.”

“Night Train ” which depicts an older man in profile sitting alone on a train is one of Mauney’s favorite pieces. The painting is a balance of light and dark somber and beautiful. The man holds a folded newspaper close to his body and balances a pair of reflective glasses in his lap. Though he looks down toward the newspaper his gaze falls slightly above it focusing on the floor or the wall in front of him. A light source originating behind the viewer falls brightly on his forehead. His cheek shoulder and hand and the area surrounding him are composed of warm reds and yellows. The outer corners darken and are mostly darker shades and blues.

The image has a melancholic quality that is authentic to the painting’s subject. Mauney describes seeing the man on a train while traveling with her daughter and thinking that he looked sad.

Though she is attracted to moody emotional subjects the motivation is not to elicit a gratuitous sense of sadness. Rather the experienced therapist appreciates the truth of depicting both the ups and downs of the human condition.

“I’m basically a happy person and I think that’s why I’m able to explore the darker side of our feelings in the work I do ” she says. “I like to stay in touch with my feelings and I’m very aware of the feelings of the people around me after 25 years of seeing people who were struggling. I find these sad subjects more interesting because there seems to be more depth to that side of humanity. I can’t stand the turn our culture has taken likely influenced by television where you’re expected be in a manic state of happiness all the time. I think it’s incredibly fake and life is so much more complicated than that. I think we are better off if we can find a way to live sort of in the middle of the feeling spectrum.”

auney almost always works in series and the most prodigious to date is her “Empty Porch” set which depicts abandoned dilapidated homes with large Southern-style sitting porches.

Though each one is unique they share a theme of abandonment and often suggest poverty struggle and disappointment. These quiet subtle images prompt the viewer to consider the people who used to live in these now-abandoned spaces. But they also faithfully retain the beautiful details of early-American architecture and are frequently flanked by bright hopeful skylines.

The 40-plus paintings in this group have become a sort of signature for Mauney and she has found that many people relate to them.

“They seem to speak to people especially in the South ” she says. “Most of the houses are in the middle of nowhere and are abandoned and have been for quite a long time. You see a broken window and a sagging porch and you’re reminded that people used to live there; you think about the families.”

Mauney’s compassion for the variety and depth of humanity has inspired a moving and beautifully somber body of work. Her skill in watercolor and her artistic eye blend seamlessly with an impressive insight into human thought and emotion. Viewers may not experience unbridled joy in her work but are guaranteed meaningful reflection that likely will expand their understanding of human variety and difference.