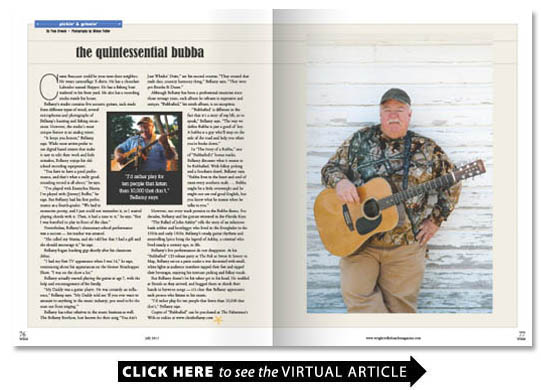 Chris Bellamy could be your next-door neighbor. He wears camouflage T-shirts. He has a chocolate Labrador named Skipper. He has a fishing boat trailered in his front yard. He also has a recording studio inside his house.

Bellamys studio contains five acoustic guitars each made from different types of wood several microphones and photographs of Bellamys hunting and fishing excursions. However the studios most unique feature is an analog mixer.

It keeps you honest Bellamy says. While most artists prefer to  use digital based mixers that make  it easy to edit their work and hide  mistakes Bellamy enjoys his old-school recording equipment.

You have to have a good performance and thats what a really good-sounding record is all about he says.

Ive played with Emmylou Harris. Ive played with [Jimmy] Buffet he says. But Bellamy had his first performance as a fourth-grader. We had to memorize poetry and I just could not remember it so I started playing chords with it. Then it had a tune to it he says. But I was horrified to play in front of the class.

She called my Mama and she told her that I had a gift and she should encourage it he says.

I had my first TV appearance when I was 14 he says reminiscing about his appearances on the Homer Briarhopper Show. I was on the show a lot.

Bellamy actually started playing the guitar at age 7 with the help and encouragement of his family.

My Daddy was a guitar player. He was certainly an influence Bellamy says. My Daddy told me If you ever want to amount to anything in the music industry you need to be the man out front singing.

Bellamy has other relatives in the music business as well. The Bellamy Brothers best known for their song You Aint Just Whislin Dixie are his second cousins. They created that male duo country harmony thing Bellamy says. They were pre-Brooks & Dunn.

Although Bellamy has been a professional musician since those teenage years each album he releases is expressive and unique. Bubbafied his ninth album is no exception.

Bubbafied is different in the fact that its a story of my life so to speak Bellamy says. The way we define Bubba is just a good ol boy.  A bubba is a guy wholl stop on the side of the road and help you when youre broke down.

In The Story of a Bubba one  of Bubbafieds bonus tracks  Bellamy discusses what it means to  be Bubbafied. With folksy picking and a Southern drawl Bellamy says Bubba lives in the heart and soul of most every southern male. Bubba might be a little overweight and he might not use real good English but you know what he means when he talks to you.

However not every track pertains to the Bubba theme. For decades Bellamy and his guitars wintered in the Florida Keys.

The Ballad of John Ashley tells the story of an infamous bank robber and bootlegger who lived in the Everglades in the 1910s and early 1920s. Bellamys steady guitar rhythms and storytelling lyrics bring the legend of Ashley a criminal who lived nearly a century ago to life.

Bellamys live performances do not disappoint. At his Bubbafied CD release party at The Pub at Sweet & Savory in May Bellamy sat on a patio under a tree decorated with small white lights as audience members tapped their feet and sipped their beverages enjoying his intricate picking and folksy vocals.

But Bellamy doesnt let his talent get to his head. He nodded  at friends as they arrived and hugged them or shook their hands in between songs its clear that Bellamy appreciates each person who listens to his music.

Id rather play for ten people that listen than 10 000 that dont Bellamy says.

Copies of Bubbafied can be purchased at The Fishermans Wife or online at www.chrisbellamy.com