The Pull of the Pepper 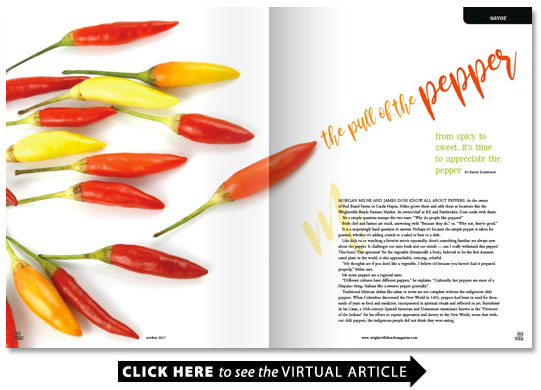 Morgan Milne and James Doss know all about peppers. As the owner of Red Beard Farms in Castle Hayne Milne grows them and sells them at locations like the Wrightsville Beach Farmers Market. As owner/chef at RX and Pembroke’s Doss cooks with them.

Yet a simple question stumps the two men: “Why do people like peppers?”

Both chef and farmer are stuck answering with “Because they do ” or “Why not they’re good.”

It is a surprisingly hard question to answer. Perhaps it’s because the simple pepper is taken for granted whether it’s adding crunch to a salad or heat to a dish.

Like deja vu or watching a favorite movie repeatedly there’s something familiar yet always new about the pepper. It challenges our taste buds and our minds — can I really withstand this pepper? This burn? This spiciness? Yet the vegetable (botanically a fruit) believed to be the first domesticated plant in the world is also approachable enticing colorful. “My thoughts are if you don’t like a vegetable I believe it’s because you haven’t had it prepared properly ” Milne says.

He notes peppers are a regional taste.

“Different cultures have different peppers ” he explains. “Culturally hot peppers are more of a Hispanic thing. Italians like a sweeter pepper generally.”

Traditional Mexican dishes like salsas or stews are not complete without the indigenous chili peppers. When Columbus discovered the New World in 1492 peppers had been in used for thousands of years as food and medicine incorporated in spiritual rituals and reflected in art. Bartolom? de las Casas a 16th-century Spanish historian and Dominican missionary known as the “Protector of the Indians” for his efforts to expose oppression and slavery in the New World wrote that without chili peppers the indigenous people did not think they were eating.

Today that’s still true. The most popular regional chilies include the ancho (a dried version of the poblano) jalapeno habanero serrano and del arbol. Of the commonly used hot peppers habaneros rank as the spiciest.

In pre-Columbian America shamans and medicine men mixed chilies with tobacco and other plants to aid in “journeys” to the upper and lower worlds. The Aztecs burned chilies at funerals to ward off evil and rubbed them on the feet of babies to ensure good health.

Peppers are known for their medicinal qualities. In powdered form cayenne pepper equalizes blood pressure and can help stop bleeding. Jalapenos clear up congestion by thinning mucus. The capsaicin in peppers — the chemical compound that gives them their heat — is touted as a treatment for everything from certain types of cancer to psoriasis to muscle aches.

While Italians like their peppers sweet and Latin Americans prefer hot it seems Americans cling to the approachable bell pepper.

“Bell peppers sell the best ” Milne says. “They’re the ones people are used to and know how to use. They bring a better price than a hot pepper. But there’s a difference as far as production. With hot peppers you’ll have a lot more peppers per plant as opposed to a bell pepper so it kind of evens out.”

Bell peppers are commonly grilled or baked or add crunch when served raw. They can accompany meat like steak or grilled chicken or sometimes are shoved between the two on a shish kebab.

They add flavor texture and color when served raw in salads. For a simple health-conscious approach many ditch the pita and prefer scooping hummus with bell peppers.

In this year’s crop Milne has an orange Garfield pepper the Italian cornito giallo and a Japanese shishito which has a sweet flavor. The shishito trend became popular with Charleston chefs and eventually found its way up to Wilmington. Milne has two whole rows of them on his farm.

One of his clients is Doss who says one of his favorite late-summer dishes involves the shishito.

“We do a grilled shishito dish at Pembroke’s where we fire them up and grill them real quick ” he says. “Last year we did it with hummus and some feta.”

The shishito hails from East Asia. It turns red upon maturing but is usually harvested green (although Doss said he likes both red and green). The name shishi refers to the tip which looks like the head of a lion.

With a sweet crowd-pleasing flavor grilled shishitos have gone beyond restaurants to backyard cookouts. They can be served as an appetizer sprinkled with salt simmered in olive oil and accompanied by a yogurt sour cream lemon and mayonnaise-based dipping sauce.

While Doss serves dishes with shishitos he prefers cooking with hot peppers. He favors working with jalape?os because they are “not too hot but you get some spice.”

“We generally make a few fermented hot sauces every year ” he says. “I normally look for jalapenos for that so they’re not too terribly hot something we can cook with. And I like putting sweeter bell peppers in shrimp ‘n grits.”

The jalape?o is a popular spicy pepper because it adds a nice kick without too much of a burn. It registers between 2 500-5 000 on the Scoville scale which measures the concentration of capsaicin.

But it’s too mild for some thrill seekers who like their peppers the hotter the better. How hot? The Carolina Reaper developed by Ed Currie in Rock Hill South Carolina is recognized by the Guinness Book of World Records as the hottest pepper in the world with a Scoville index of 1 569 300. If you were to take just a nibble of the Carolina Reaper the capsaicin content is so extreme your body would literally be tricked into “inflaming” itself.

While there’s no physical burn the capsaicin in any hot pepper stimulates the nerve receptors that normally respond to heat. Some people are less sensitive because they have fewer receptors lining their mouth and throat but to truly withstand the burn it helps to be a bird. Birds are immune to the chemical which makes them excellent pepper cultivators. The seeds are swallowed whole and make their way through the bird’s digestive tract and to new soil thanks to migrating species.