The Promised Land of Milk and Honey (and Eggs)

BY by Barrie Cohen and Niles Merritt 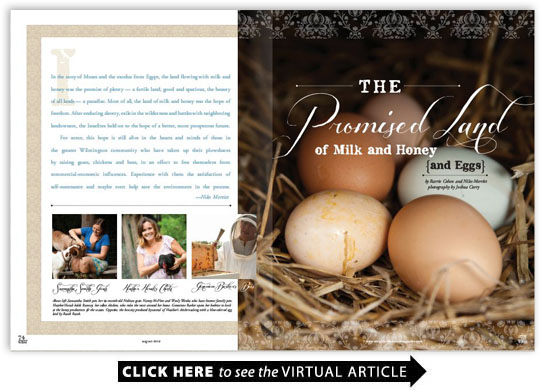 In the story of Moses and the exodus from the land flowing with milk and honey was the promise of plenty a fertile land good and spacious the beauty of all lands a paradise. Most of all the land of milk and honey was the hope of freedom. After enduring slavery exile in the wilderness and battles with neighboring landowners the Israelites held on to the hope of a better more prosperous future.

For some this hope is still alive in the hearts and minds of those in the greater community who have taken up their plowshares by raising goats chickens and bees in an effort to free themselves from commercial-economic influences. Experience with them the satisfaction of self-sustenance and maybe even help save the environment in the process.

In what could be called s biggest agricultural kick since the Baby Boomers obsession with Jethro Kloss Back to a new generation has begun its own movement toward a more agrarian lifestyle. Samantha Smith owner of Sugar on is a forerunner in this rediscovered passion for the organic.

As a kid I lived next to a family that raised cows and I always loved being around animals Smith says.

Her love for goats began when she befriended Miss Sally Martin owner of Ashton Farm Summer Day Camp in . From Miss Sally Smith purchased two rambunctious Nubian kids with the hope that they would make great pets and great companions for her children.

The familys bottle-raised goats Wooly Wonka and Nanny McPhee
are no strangers to sharing the love especially with a yard full of chickens two cats and a dog.

Goats are funny animals to watch and play with. Once they get older I can teach them how to laugh and dance on command Smith says.

Noisy and nosy Wooly and Nanny are very social creatures with big appetites. Though they are only six months old the pair has managed to clean
the leaves off of almost every tree.

Producing an average of two to three quarts per day Nubian goats are not only loveable and playful but also provide their owners with a steady supply of rich creamy wholesome milk. When they reach a healthy birthing weight (approximately 80 pounds) Smith will finally be able to milk them.

When they are old enough to be milked I will be able to get … cheese out of them. The rest of the milk will be used to make candles soaps and lotions that I will sell in my shop Smith says.

Not only will Smith soon be able to get milk cheese and other dairy products from her goats but she also collects fresh eggs from her chickens. Chickens are easy animals to obtain and carry fewer restrictions than goats to raise. Often permits are not needed for chickens unless they are noisy. In order to house chickens in there must be 20 000 square feet of space contained in a secure fence and 10 square feet per animal. For livestock to be housed in a residential area there needs to be a minimum of 40 000 square feet with 20 000 square feet per animal. In both cases the animals need to be set back 25 feet from the property line.

Heather Horak has created a lifestyle surrounding her chickens. They are more just animals; theyre her pets.
They have become the center of entertainment for her four-year-old girl
and six-year-old boy.

Her eight chickens many named by her youngest daughter produce an abundant amount of eggs that she uses to cook everything from hard-boiled eggs to cheesecake. She houses her fine-feathered friends in a homemade coop in her backyard.

The supplies for my coop were either donated to me or I found people giving away hardware scraps on craigslist Horak says.

Her love for chickens started as a child growing up in Amityville . Her parents started out with a few chickens for fun and her love of them skyrocketed from there.

Ramsey a black Australorp chicken is the leader of the peep and the oldest chicken in the coop. Ramsey is quite the social butterfly allowing Horak to stroke her feathers without the slightest bit of flinching. Bawk Bawk an Easter Egger lays eggs so blue they could be painted. With such a wide variety of chickens in her coop there is no shortage of egg production.

When Horak has more than she needs she takes to the bartering and trade field. She trades her eggs with neighbors or friends for food or other services.

I traded a dozen eggs for my sons first haircut Horak says. My neighbor has a boat and goes fishing a lot. I trade my eggs for some of his freshly caught fish.

Like goats chickens are pantophagous theyll eat anything. Horak uses her pets as environmentally friendly compost machines by feeding them the scraps from her table. Horaks chickens especially enjoy crab legs and vegetables.

Chickens are pretty smart Barker says. If the hive is not high enough up the chickens will come and tap on the beehive and theyll jump out and theyll eat the live bees. So you have to get the beehive high enough over the heads of chickens so they dont get into a gumball machine activity where theyre just pecking the hive.

Barker a former anchorwoman at WECT found a new desire to protect the bee community after watching the award-winning documentary Vanishing of the Bees. She cares for her bees and even talks to them in soothing tones to calm them down.

I worry about the bees Barker says. They are in serious short order.

Because of industrial and neighborhood pesticide use many bee colonies are beginning to collapse. The majority of remaining bees are either commercial or hobbyist; there are very few wild beehives left.

We have the potential to lose the pollination of our fruits and vegetables Barker says. There are simple things you can do in your yard to preserve the bee community. You can plant bee-friendly foliage. Plant butterfly bushes holly is something the bees feed on here lavender tulip poplar gallberry.

Burt Millette a beekeeper of more than 20 years and Barkers teacher believes it would benefit the bees if people were to set up beehives in their backyards. Not only would this help to save the bees but it might also provide owners with an abundance of honey one hive can produce anywhere from 30 to 60 pounds of honey. Barker and Millette even believe locally-produced honey can help to prevent allergies. Barker has traded her honey in exchange for meals at Manna a local restaurant. Merritt