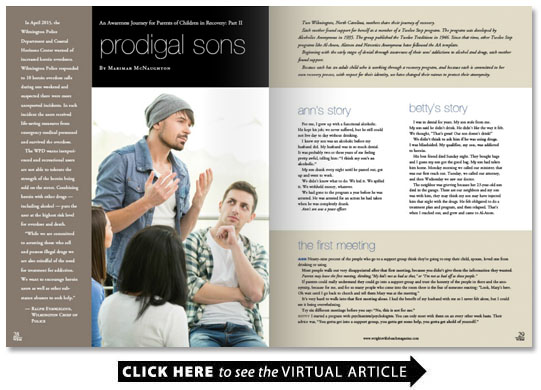 In April 2015 the Wilmington Police Department and Coastal Horizons Center warned of increased heroin overdoses. Wilmington Police responded to 10 heroin overdose calls during one weekend and suspected there were more unreported incidents. In each incident the users received life-saving measures from emergency medical personnel and survived the overdose.

The WPD warns inexperienced and recreational users are not able to tolerate the strength of the heroin being sold on the street. Combining heroin with other drugs — including alcohol — puts the user at the highest risk level for overdose and death.

“While we are committed to arresting those who sell and possess illegal drugs we are also mindful of the need for treatment for addiction. We want to encourage heroin users as well as other substance abusers to seek help.”

Beginning with the early stages of denial through awareness of their sons’ addictions to alcohol and drugs each mother found support.

Because each has an adult child who is working through a recovery program and because each is committed to her own recovery process with respect for their identity we have changed their names to protect their anonymity.

For me I grew up with a functional alcoholic. He kept his job; we never suffered but he still could not live day to day without drinking.

I knew my son was an alcoholic before my husband did. My husband was in so much denial. It was probably two or three years of me feeling pretty awful telling him: “I think my son’s an alcoholic.”

My son drank every night until he passed out got up and went to work.

We didn’t know what to do. We hid it. We spilled it. We withheld money whatever.

We had gone to the program a year before he was arrested. He was arrested for an action he had taken when he was completely drunk.

Ann’s son was a peace officer.

I was in denial for years. My son stole from me. My son said he didn’t drink. He didn’t like the way it felt. We thought “That’s great! Our son doesn’t drink!”

We didn’t think to ask him if he was using drugs. I was blindsided. My qualifier my son was addicted to heroin.

His best friend died Sunday night. They bought bags and I guess my son got the good bag. My son had taken him home. Monday morning we called our minister; that was our first reach out. Tuesday we called our attorney and then Wednesday we saw our doctor.

The neighbor was grieving because her 23-year-old son died in the garage. These are our neighbors and my son was with him they may think my son may have injected him that night with the drugs. He felt obligated to do a treatment plan and program and then relapsed. That’s when I reached out and grew and came to Al-Anon.

ANN Ninety-nine percent of the people who go to a support group think they’re going to stop their child spouse loved one from drinking or using.

Most people walk out very disappointed after that first meeting because you didn’t give them the information they wanted.

Parents may leave the first meeting thinking “My kid’s not as bad as that ” or “I’m not as bad off as these people.”

If parents could really understand they could go into a support group and trust the honesty of the people in there and the anonymity because for me and for so many people who come into the room there is the fear of someone reacting: “Look Mary’s here. Oh wait until I go back to church and tell them Mary was at the meeting.”

It’s very hard to walk into that first meeting alone. I had the benefit of my husband with me so I never felt alone but I could see it being overwhelming.

Try six different meetings before you say: “No this is not for me.”

BETTY I started a program with psychiatrists/psychologists. You can only meet with them on an every other week basis. Their advice was “You gotta get into a support group you gotta get some help you gotta get ahold of yourself.”

My company has an employee’s assistance program an EAP. So does my husband’s. Total confidentiality. We went to a counselor and this person was only going to be able to help us but so much. The counselor gave us guidelines free sessions advice: do this and do that and to seek a support group.

ANN When you’re in a meeting you’re there for yourself from the sense of learning how to detach yourself with love from that person who is using or drinking.


finding treatment for loved ones

After his big event Ann’s son was jailed for nine days released binge drank for three days and then turned himself into a treatment program on Easter Sunday three years ago. Because he was sober that day his insurance did not cover the treatment. Out-of-pocket costs for a 90-day program were $12 000 per month totaling $36 000. His ensuing 12-stretched-to-18-month outpatient treatments were included.

Betty’s son was admitted to the New Hanover Regional Medical Center psych ward until a bed opened at Cherry Hospital in Goldsboro North Carolina. Betty’s son went to Cherry Hospital for a 30-day treatment plan which cost $10 000. The total rehab was followed by living in a halfway house then outpatient treatment.


ANN A six-month program has a greater success rate than a three-month 90-day program.

BETTY On any given day there are 30 to 40 people waiting for beds in the treatment facility.

We committed my son. He was in a psych ward and we didn’t go get him. I remember I went to the psych ward after about three or four days to tell him he wouldn’t come home and I looked down at him and could not look at him. He had no shoelaces and my heart was just crushed that they thought he would kill himself in there. It was just so emotional.

My son knows his addiction is so real — he deals with it every day. He offsets his urges with AA groups he runs programs volunteered with a group that went to a psych ward. He’s always going to a meeting chairing a meeting.


addiction is a disease

ANN Denial is part of the embarrassment and the shame. I kinda understood but so much better understand now [addiction’s] a disease.

There’s a 17 percent rate for rehab effectiveness. That’s a low percentage for a disease.

The biggest hump is that you really think it’s a behavior that’s why in the younger years you think “They’re bingeing that’s what all college kids do oh as long as he doesn’t drive.”

Kids go off to service you know you’ve seen a lot of your friends go through college get married grow up and stop. Alcoholics can’t stop. That’s the nature of the disease.

But what I’ve learned with the program it’s truly a disease. You can take a drink maybe two drinks and stop. With an alcoholic there’s a saying: One is too many and 22 is not enough.

You have a kid who’s a diabetic and a kid who drank too much. You bring them into the emergency room — not to fault the medical profession but they’re going to go right to that diabetic and not the one who’s drinking. And the diabetic he’s not following his program. He’s not eating correctly he’s not taking his insulin the way he’s supposed to.

Neither is the alcoholic. He can’t follow his program unless he’s in a program.

We always have our isms and our behaviors and that comes with the support.

It’s a very lonely disease. If your child has a horrible chronic fatal disease you can share it the community jumps in they bring you food they have fundraisers.

My kid has a fatal disease.

Once you have a suspicion I really think you have to get yourself into a program that will then teach you how to go on. It’s an ongoing process that doesn’t happen immediately but it’s ongoing.

The wisdom comes from the support of the people who’ve been through so many things.

You still learn so many things about yourself.

Ministry for Men with Addictions