The Prodigal Son: Part I 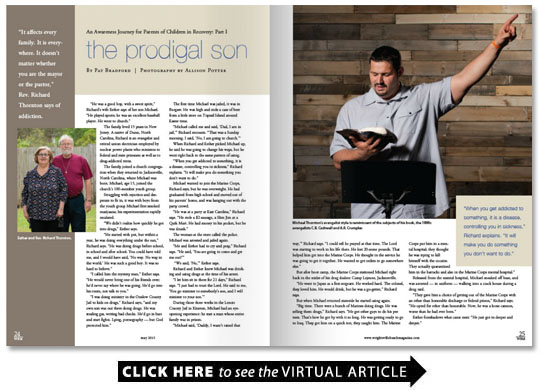 “It affects every family. It is everywhere. It doesn’t matter whether you are the mayor or the pastor ” Rev. Richard Thornton says of addiction.

“He was a good boy with a sweet spirit ” Richard’s wife Esther says of her son Michael. “He played sports; he was an excellent baseball player. He went to church.”

The family lived 15 years in New Jersey. A native of Dunn North Carolina Richard is an evangelist and retired union electrician employed by nuclear power plants who ministers to federal and state prisoners as well as to drug-addicted teens.

The family joined a church congregation when they returned to Jacksonville North Carolina where Michael was born. Michael age 15 joined the church’s 100-member youth group.

Struggling with rejection and desperate to fit in it was with boys from the youth group Michael first smoked marijuana; his experimentation rapidly escalated.

“We didn’t realize how quickly he got into drugs ” Esther says.

“He started with pot but within a year he was doing everything under the sun ” Richard says. “He was doing drugs before school in school and after school. You could have told me and I would have said ‘No way. No way in the world.’ He was such a good boy. It was so hard to believe.”

“I called him the mystery man ” Esther says. “He would never bring one of his friends over; he’d never say where he was going. He’d go into his room not talk to you.”

“I was doing ministry in the Onslow County Jail to kids on drugs ” Richard says “and my own son was out there doing drugs. He was stealing gas writing bad checks. He’d go in bars and start fights. Lying pornography — but God protected him.”

The first time Michael was jailed it was in Burgaw. He was high and stole a case of beer from a little store on Topsail Island around Easter time.

“Michael called me and said ‘Dad I am in jail ‘” Richard recounts. “That was a Sunday morning. I said ‘No I am going to church.'”

When Richard and Esther picked Michael up he said he was going to change his ways but he went right back to the same pattern of using.

“When you get addicted to something it is a disease controlling you in sickness ” Richard explains. “It will make you do something you don’t want to do.”

Michael wanted to join the Marine Corps Richard says but he was overweight. He had graduated from high school and moved out of his parents’ home and was hanging out with the party crowd.

“He was at a party at East Carolina ” Richard says. “He stole a $2 sausage a Slim Jim at a Quik Mart. He had money in his pocket but he was drunk.”

The woman at the store called the police. Michael was arrested and jailed again.

“Me and Esther had to cry and pray ” Richard says. “He said ‘You are going to come and get me out?'”

Richard and Esther knew Michael was drinking and using drugs at the time of his arrest.

“I let him sit in there for 21 days ” Richard says. “I just had to trust the Lord. He said to me ‘You go minister to somebody’s son and I will minister to your son.'”

During those three weeks in the Lenoir County Jail in Kinston Michael had an eye-opening experience: he met a man whose entire family was in prison.

“Michael said ‘Daddy I wasn’t raised that way ‘” Richard says. “I could tell he prayed at that time. The Lord was starting to work in his life there. He lost 20-some pounds. That helped him get into the Marine Corps. He thought in the service he was going to get it together. He wanted to get orders to go somewhere else.”

But after boot camp the Marine Corps stationed Michael right back in the midst of his drug dealers: Camp Lejeune Jacksonville.

“He went to Japan as a first sergeant. He worked hard. The colonel they loved him. He would drink but he was a go-getter ” Richard says.

But when Michael returned stateside he started using again.

“Big time. There were a bunch of Marines doing drugs. He was selling them drugs ” Richard says. “He got other guys to do his pee tests. That’s how he got by with it so long. He was getting ready to go to Iraq. They got him on a quick test they caught him. The Marine Corps put him in a mental hospital; they thought he was trying to kill himself with the cocaine. They actually quarantined him in the barracks and also in the Marine Corps mental hospital.”

Released from the mental hospital Michael sneaked off base and was arrested — in uniform — walking into a crack house during a drug raid.

Esther foreshadows what came next: “He just got in deeper and deeper.”

In his videoed testimony “A Life of Surrender” for the Christian Broadcasting Network’s 700 Club with Pat Robertson Michael says after cocaine he started using crystal meth then ecstasy Percocet and Xanax and various other prescription pills. Crack became his drug of choice. Homeless in crack houses stealing and selling himself as a male prostitute — anything to pay for drugs — Michael had cut himself off from everyone who loved him.

Things culminated when Michael stole from the notorious crack dealer he was staying with. He didn’t get far and the choice was pay the money back or be killed.

Esther says “I said ‘Go ahead and let them cut your throat and bury you six foot under.’ I hung up.”

“I loved my son so much. I was tough but Esther was tougher than I was. Michael told me later it took that he says he didn’t realize how much he had put on his momma ” Richard says. “A lot of parents think ‘If I don’t help them they will die.’ That is what these parents do. That enables them. You just have to trust God that He is going to bring them out.”

Richard was the associate pastor at The Potter’s Wheel a Christian drug addiction treatment center in Mt. Olive North Carolina. He was also a chaplain at Onslow Memorial Hospital and worked closely with the chaplains on the Marine base.

Richard paid the drug dealer and the agreement was Michael would go to rehab. Still the road to recovery had a bumpy beginning.

It was Michael’s birthday.

“I got him lined up to go to The Potter’s Wheel on Monday morning. He’d been up two days trying to come off of cocaine. I was at church Esther was home with Michael babysitting him round the clock ” Richard says.

Richard resumes the story. “When the pastor got up to speak this guy — about ten minutes into his sermon — stops. He knew me but he didn’t really know my son. He came to me and said ‘Richard you’ve got a prodigal son he’s going to come back home. He is going to preach the Gospel and do all these things.’ I was completely unglued.”

“He’d gotten real anxious ” Richard says. “He got his phone called one of his drug buddies jumped the fence and took off with the drug dealer. The next morning 5 or 6 o’clock doorbell rang and it was Michael.”

That day Richard drove Michael to Mt. Olive and dropped him off.

“He was in a mess he was mad he didn’t want to do it but he had promised me he would ” Richard says.

After his second week Michael told Richard and Esther he had rededicated his life and the calling on his life he had when he was ten years old was still in good standing. He said he was going to college to become an evangelist and the Lord was going to pay for his college.

“We had to get him a tutor to get him out of high school. He’s telling me he’s going to go to college. His highest grade in high school was like a 75 ” Richard says. “I didn’t have any money. He’d gone through his inheritance; he’d blown through $30 000 or $40 000. He was telling me now he is going to college.”

It was then father and son went on a divine appointment that led them to Heritage Bible College in Dunn North Carolina. Accepted the same day Michael not only graduated first from Bible College with no money but next Regent University in Virginia Beach Virginia. At Heritage with a 4.0 average Michael became student body president. He also met his future wife Amber. At Regent Michael earned a? master’s degree in public administration/nonprofits. Amber earned two master’s degrees.

Esther says “It was a miracle. God was in all of it. It was all Jesus.”

Richard says “God will bring good out of it. God is a miracle God. The only one way you’ll have a normal life is with the Lord. I have done 40 years of ministry. You are going to have to have the Holy Spirit to overcome it.”

Michael has since shared his testimony across Eastern North Carolina in South Carolina Virginia and New Jersey even back on the Marine base where he was once held.

“The head guy in the Marine Corps called me and asked ‘Is there a possibility I can get your son out here to share with these guys in the brig?'” Richard says. “It was so touching to see how they embraced him that night. God just used him. They brought us out onto the base Michael shared his testimony. They still recognized him as a Marine. They recognized he got captured by the devil. It’s like he was wounded in action.”

Today Michael is the outreach pastor at Global River Church in Wilmington. In addition through Ignite Ministries co-founded with Amber he ministers in cities and towns throughout the South. His first nonfiction book “Fire in the Carolinas: the Story of The Revival Legacy of C.B. Cashwell and A.R. Crumpler ” was published in 2014; his second is in the works. Michael and Amber have five children ages two months to six years.

Richard and Esther live in Jacksonville and minister often with Michael and Amber.