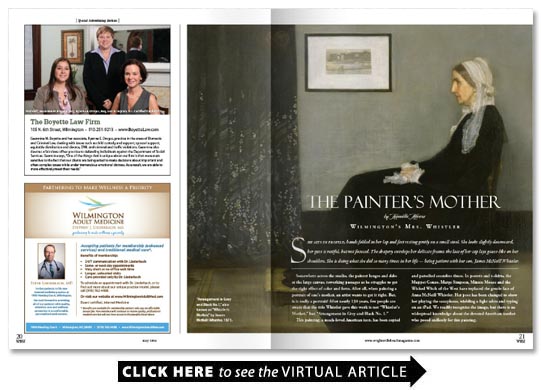 She sits in profile hands folded in her lap and feet resting gently on a small stool. She looks slightly downward her gaze is restful but not focused. The drapery envelops her delicate frame; the lace of her cap lays gauze-like on her shoulders. She is doing what she did so many times in her life — being patient with her son James McNeill Whistler.

Somewhere across the studio the painter lunges and dabs at the large canvas reworking passages as he struggles to get the right effect of color and form. After all when painting a portrait of one s mother an artist wants to get it right. But is it really a portrait? After nearly 150 years few people are aware that the title Whistler gave this work is not  Whistler s Mother   but  Arrangement in Grey and Black No. 1.

This painting a much-loved American icon has been copied and parodied countless times. In posters and t-shirts the Muppet Gonzo Marge Simpson Minnie Mouse and the Wicked Witch of the West have replaced the gentle face of Anna McNeill Whistler. Her pose has been changed to show her playing the saxophone wielding a light sabre and typing on an iPad. We readily recognize the image but there is no widespread knowledge about the devoted American mother who posed endlessly for this painting.

She sits in profile hands folded in her lap and feet resting gently on a small stool. She looks slightly downward her gaze is restful but not focused. The drapery envelops her delicate frame; the lace of her cap lays gauze-like on her shoulders. She is doing what she did so many times in her life — being patient with her son James McNeill Whistler.

Anna McNeill Whistler born in Wilmington North Carolina on September 27 1804 was the fifth child of a physician from Edinburgh Scotland Daniel McNeill and his second wife the former Martha Kingsley. Dr. McNeill owned a plantation in Bladen County where Anna and the other children spent their summers. Through her brother William a cadet at West Point she met her future husband George Whistler also a West Point cadet. Anna had been close friends with George Whistler s first wife Mary. She had spent a great deal of time with Mary George and their three children and upon Mary s death she grew closer to George.

They were married in 1831. They moved first to New Jersey and then to Lowell Massachusetts where George went to work for the railroad as an engineer. Soon the Whistler household added two boys: James Abbott and his younger brother Willie McNeill. Two additional children did not survive.

Anna and the children followed George to Russia where he was invited by the czar to be the chief engineer on a railroad to be built from Moscow to St. Petersburg. Living in Russia for six years while managing a household where only the cook spoke English Anna s dedication to her family and efficiency at running a large household made the years while sometimes a struggle a successful adventure for the young family — until George Whistler died in 1849.

Grief-stricken Anna put on the mourning clothes that she would wear for the rest of her life and returned to America with the two boys James and Willie.

James was always the rebellious son. He made an attempt to follow family tradition and entered West Point as a cadet at large in 1851 only to be dismissed in 1854 for deficiencies in chemistry. He has often been quoted as saying   Had silicon been a gas I would have been a major-general.  He was however at the top of his class in drawing. He worked for a time as a draughtsman at the US Coast and Geodetic survey but he soon resigned. He departed for England and the continent to study art in September 1855.

When Whistler left the US and sailed to London he stayed with his sister Deborah and her family for about a month. He then left England for Paris and the Latin Quarter. Whistler spent most of the next years in Paris with some visits to England. By the end of the 1850s he was based in London. He lived in Paris again several years later.

Once her boys left home Anna spent most of the rest of her life both in America and England visiting or living with her sons or her stepdaughter Deborah. Anna s dedication to her family was unwavering. In 1860 Willie had married a woman from a Georgia family with strong Confederate sympathies and he joined the Confederate army as a surgeon. When he was stationed in Richmond Virginia during the war Anna ran the blockade to visit him and was with him when his wife fell ill and died. Staying with Willie as he served in the Confederate army was not a sensible choice so she boarded a blockade-running ship again to return to James in London.

In February 1865 Willie Whistler was carrying dispatches through the lines to New York. He sailed from New York to Liverpool and when peace was declared he decided not to return to America. He settled in London where he established a medical practice. For the last 16 years of her life Anna was fortunate to have her boys and her stepdaughter nearby where she could spend time with them and in turn they could care for her when she was in declining health. She died in Hastings England in 1881.

We are fortunate to get a glimpse into Anna s thoughts and interests through surviving historical documents including her diary from 1850 archived in the Library of Congress. Additionally many books letters and manuscripts from her estate were bequeathed to the University of Glasgow by James Whistler s sister-in-law. Among these documents is her handwritten manuscript of recipes which has been edited and published by Margaret F. MacDonald (Whistler s Mother s Cook Book ). Thus as we turn briefly to reflect upon the painting of Anna McNeill Whistler we can also contemplate making her spongerusk for afternoon tea.

Arrangement in Grey and Black No. 1 also know as  Portrait of the Painter s Mother   took three months to paint and required countless sittings of Anna Whistler. When she was too tired to pose someone would pose in her stead. Whistler was doing this work for himself. Anna s letters clearly indicate he cared deeply about the work. Yet the work was badly received by critics when it was first exhibited. Critics said such things as   Arrangement in Grey and Black No. 1: Portrait of the Painter s Mother  is another one of Mr. Whistler s experiments   and  The arrangement is stiff and ugly enough to repel many.

The public did not understand Whistler s credo of art for art s sake. His commitment was to the aesthetic arrangement of color space form and line — the formal elements that lie at the heart of his style. This does not mean he did not also see the work as a portrait or that he was trying to hide the subject matter. It is more that the presentation of his mother seated in profile was a part of an artistic arrangement and not primarily a sentimental portrait of an elderly woman. But James McNeill Whistler was always a contradiction in terms. On at least one occasion he told an artist friend  . . . one does like to make one s mummy just as nice as possible.  Whistler was delighted when 20 years later in 1891 the painting was the first of his works to be acquired by a public collection — the Muse du Luxembourg. After Whistler s death the work was given to the Louvre. It hangs today in the Muse d Orsay in Paris.

Kemille Moore PhD is Associate Professor of Art and Art History at the University of North Carolina Wilmington.