The One That Got Away, Three Times!

A couple of inexperienced fishermen try to land the big one 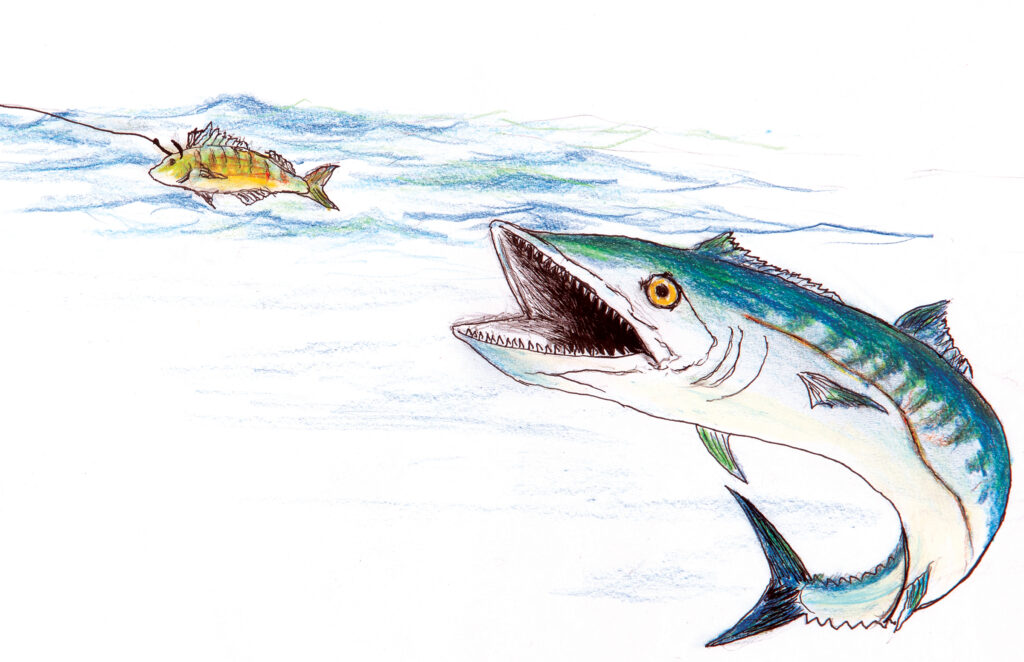 From the very first trip with my dad, I was totally enamored with anything related to fishing. My first fish was caught on the last piece of shrimp that I had discovered as we were gathering gear to leave. Dad agreed to let me try one last cast and it netted me the largest croaker in the cooler. I was elated and could have stayed all day.

Due to dad working irregular hours on the railroad, fishing trips were unfortunately few and far between. Finally, at the age of 12, I was allowed to fish on Crystal Pier with Paul, a neighborhood buddy. One of our moms would drop us off in the morning and the other mom would pick us up before dark.

This was the early ‘60s and things were different and much cheaper. You could fish from 6 a.m. until midnight for 50 cents. We were able to fish, buy bait, and eat lunch for $2. As us old-timers would say, “Those were the good ole days!”

We usually took two poles, one for bottom fishing and one for “plugging” when the Spanish mackerel and bluefish were biting. If the fish were not biting, we would walk up and down the pier looking for lures and various tackles that were caught on the pilings. When we located one, we would lower a treble hook on a heavy weighted line and snag it. By working the line up and down it would eventually break free and we would add it to the tackle box.

Our box was filled with various size hooks, sinkers, assorted tackles, and anything we thought might help us catch fish. We didn’t have the most sophisticated gear, but the price was right. And we frequently went home with fish.

This story happened on one particular day when there were not many people on the pier. It was a typical summer day with a blazing sun and very little breeze. The fishing was slow, and it was hot!

There were four or five people on the end of the pier fishing for king mackerel with live bluefish but there had been no strikes all day. Even bottom fishing was not yielding anything.

While checking the pilings for lures, I kicked a dead pinfish into the water and leaned over the rail to check out the closest piling. I couldn’t believe my eyes. A large king mackerel casually came up, grabbed the dead pinfish I had kicked in, and slowly swam out of sight. Wow!

I looked all around to see if anyone else had seen the king and it appeared I was the only one that had. I wanted to yell at Paul, but that would alert everyone on the pier, so I quickly walked over to let him know what had happened.

Neither of us had ever fished for king mackerel or had any idea what was involved, but that was not going to stop us. How hard could it be?

I had brought my dad’s pole and Penn reel for bottom fishing and since it was the largest of the poles, we decided to rig it to catch the king. We selected the biggest hook in our jumbled tackle box and tied it onto the line without a leader. We were too excited to even think about a leader.

I quickly found another dead pinfish, hooked him on my line, and tossed the line over where I had seen the king. Sure enough, he came up again and grabbed the pinfish. My heart was pounding as I prepared to set the hook. I pulled up on the pole to set the hook and the king’s teeth cut the line. I just stood there in disbelief as the line floated free. Dang!

We now realized that we needed a leader and went scrambling through the tackle box looking for something but to no avail. After approaching several fishermen, we found a gentleman that gave us a length of 50-pound monofilament. We quickly tied on our last big hook with the leader and looked for a new pinfish.

There were none on the pier that we could find. Paul started toward the pier house looking for dead fish and I started in the other direction. I finally found a small yellowtail and hooked him on the line. The entire time we tried to look nonchalant so as to not attract attention. This was going to be our king mackerel!

I signaled to Paul. We met at the same spot where we had seen the king and tossed the line in the water. Paul brought up the fact that the king would run, so we left the reel in the free spool mode. We were two naïve, almost teenagers who had no experience on how to set the drag on a reel or how to deal with a fish this size. We were about to get our first lesson.

After just a few minutes the king reappeared and grabbed the yellowtail. To keep the line tight while I set the hook, I kept my thumb on the line and reared back on the pole. The king took off! With the reel in free spool, the line literally flew out, burning my thumb and causing the biggest “bird nest” tangle I had ever seen. The line quickly popped, and he got away again.

We were out of big hooks and had no leader. We realized that we were out of our league and decided to let one of the fishermen on the end of the pier know what had happened.

He was able to locate another dead fish and managed to hook the king. He fought him for about 10 minutes and tried to bring him in too early. The king still had enough energy to wrap around a piling and break the line.

Even though he got away, it was an exciting day for two young fishermen. Paul and I both agreed that next time we would be prepared!