The New Tastes of of Wrightsville Beach 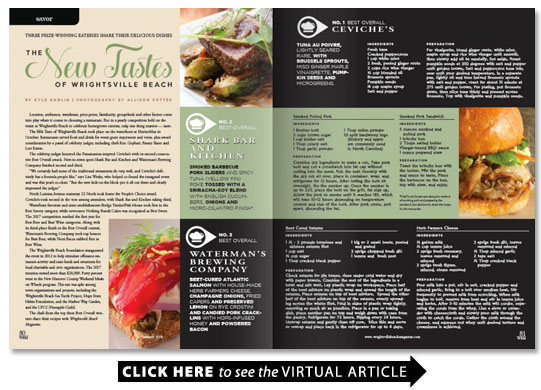 The fifth Taste of Wrightsville Beach took place on the waterfront at MarineMax in October. Restaurants served food and drink for event-goers enjoyment and votes plus award consideration by a panel of celebrity judges including chefs Eric Gephart Fanny Slater and Lori Eaton.

“We certainly had some of the traditional restaurants do very well and Ceviche’s definitely has a formula people like ” says Lisa Weeks who helped co-found the inaugural event and was this year’s co-chair. “But the new kids on the block put it all out there and clearly impressed the judges.”

The Wrightsville Beach Foundation inaugurated the event in 2012 to help stimulate offseason restaurant activity and raise funds and awareness for local charitable and civic organizations. The 2017 iteration netted more than $20 000. Forty percent went to the New Hanover County Weekend Meals on Wheels program. The rest was split among town organizations and projects including the Wrightsville Beach Sea Turtle Project Hope from Helen Foundation and the Harbor Way Garden and the CFCC Pineapple Guild.

The chefs from the top three Best Overall winners share their recipes with Wrightsville Beach Magazine.

While Ceviche’s repeated its 2015 win (the 2016 event was canceled because of Hurricane Matthew) it did it with a new chef. Kirsten Mitchell became executive chef just four months before the competition.

“She’s done an amazing job. She’s turned the menu into her menu plus my things that I want from Panama that I grew up with ” owner Hunter Tablier says. “But Kirsten has a Caribbean background and she knows ceviche [the seafood dish that gives the restaurant its name].”

Mitchell the daughter of a restaurateur grew up near Banner Elk in the North Carolina mountains. She became familiar with the flavor profiles of the Caribbean thanks to her father.

“My dad was a surfer so in the wintertime we would shut down the restaurant and we would go to Eleuthera which is one of the only islands in the Bahamas that has really good surf breaks ” Mitchell says. “We would spend months at a time there so I kind of grew up with Caribbean influences.”

Before Ceviche’s Mitchell spent four years at 1900 Restaurant and Lounge then owned operated and eventually sold the popular Vittles food truck. Despite her experience with the local scene her first entry into the Taste of Wrightsville Beach was to defend Ceviche’s past successes. Along with the 2015 Best Overall nod Ceviche’s won the People’s Choice category in 2014 just 10 days after opening its doors.

“I felt like they wanted me to be intimidated because they stuck me in the news ” says Mitchell who appeared alongside Weeks for a television news segment before the event. “They asked me ‘So are you going to win this year?’ I was like ‘I guess so? I guess I have to!'”

So how does a restaurant as well-regarded as Ceviche’s with an ever-evolving and seasonal menu choose what dish to present at a competition?

“It was a pretty simple decision ” Mitchell says. “Laura [Tablier co-owner] wanted to bring tuna. We had just put out the fall menu so it was an easy way to showcase a fall dish and do something that everybody likes — a crowd pleaser.”

Hunter Tablier says just entering the competition was its own reward.

“I went there to support the island and to bring some good food and have a good event ” Tablier says. “Winning was just a big plus. We like to support our community and do whatever we can to support it.”

For vinaigrette blend ginger roots white miso maple syrup and rice wine vinegar until smooth then slowly add oil to emulsify.Set aside. Roast pumpkin seeds at 350 degrees with salt and pepper until golden brown. Salt and peppercorn tuna loin sear until your desired temperature. In a separate pan lightly oil and toss halved Brussels sprouts with salt and pepper roast for about 15 minute at 375 until golden brown. For plating put Brussels down then slice tuna thinly and present across Brussels. Top with vinaigrette and pumpkin seeds.

It can take a little while for a new restaurant to find its feet but Shark Bar and Kitchen hit the ground running. Competing just one month after opening the town’s freshest spot received high marks as it placed second in the judges’ Best Overall vote and took third place in the People’s Choice category.

“Before joining on I spoke with [owners] Alan and Jen [Giaquinto] and I told them that one aspect I love is the events ” chef Scott Surratt says. “I like getting out there to meet some of the people we’re serving. I want us to do well and serve good food and be known for it.”

The restaurant is Surratt’s second stop in town since moving to the area from the Outer Banks in March 2017. As executive chef at Ceviche’s he provided a recipe for Wrightsville Beach Magazine’s story on lionfish (Eat Them to Beat Them July 2017) before joining the staff at Shark.

The son of a restaurant-working mother Surratt has been in the kitchen since childhood. His interest in cooking comes equally from passion developed from those early experiences and necessity for jobs as he went through college where he nearly went into nursing.

“I had one semester left and my state boards to become an RN but it just wasn’t for me ” he says. “All of my side jobs through college were cooking and I decided I wanted to take it seriously.”

The competition dish came straight from Shark’s lunch and dinner menu. The decision to prepare it instead of whipping up a one-off for the occasion was an easy one.

“It’s one of our more popular items and helps let people see what we have to offer ” Surratt says.

“I wanted to get our menu items out there.”

The Taste of Wrightsville Beach’s philanthropic element made the event a win-win for Surratt.

“I just love cooking and I want to be involved in the community as much as possible ” he says. “I want to give back and it’s not doing much but things like this help me feel like I’m doing something good rather than just making people fatter.”

Combine dry ingredients to make a rub. Take pork butt and cut a crosshatch into fat cap without cutting into the meat. Rub the butt liberally with the dry rub all over place in container wrap and refrigerate for 12 hours. After letting the butt sit overnight fire the smoker up. Once the smoker is up to 225 place the butt on the grill fat side up. Allow the pork to smoke until it reaches 185 which will take 10-12 hours depending on temperature control and size of the butt. After pork cools pull apart discarding the fat.

Toast the brioche bun with the butter. Mix the pork and sauce to taste. Place the barbecue on the bun top with slaw and enjoy.

*Chef Scott Surratt sent along his method of smoking pork and preparing the sandwich but declined to share the recipe for the tuna poke.

Waterman’s Brewing Company opened at its Pavilion Place home the former site of Fibber McGee’s on July 4 2017. While Waterman’s may be a newcomer to the area chef Drew Stanley is no stranger to the Taste of Wrightsville Beach. The Wilmington native has participated in four of the competitions most recently placing second in 2015 with Sweet n Savory Caf�.

The success of Waterman’s and Shark Bar and Kitchen came as no surprise to the local culinary veteran.

“It’s an ever-evolving scene and seems to be always getting better ” Stanley says. “Everything that comes in usually brings something new to the table and it brings business to all of us.”

For his entry Stanley opted for a beet-cured Atlantic salmon an off-menu item occasionally offered at Waterman’s.

“It was a special I ran and I had a couple of people at the event ask if it was on the menu ” he says. “Since it is cured it takes a couple of days to prep and get ready. I don’t think it will be a regular menu item but it will certainly come back.”

True to Waterman’s passion for and focus on brewing the dish’s complementary candied pork cracklins featured hops-infused honey. Stanley and brew master Zac Brown often team up to bring unique flavor profiles to the restaurant’s food and beer offerings with Stanley utilizing Brown’s brews in his dishes and Brown obtaining various food items through the kitchen for his beers.

“It’s really cool to collaborate with a chef ” says Brown who brought his Abundant Sunshine India Pale Ale and Wave Peeler Wheat to the Taste of Wrightsville Beach. “We’re both chefs or brewers we just work with different mediums.”

Waterman’s has participated in other events and competitions since opening its doors but the establishment’s proximity to Wrightsville Beach made this one special.

“That feels more like our backyard than any of the other events ” Stanley says. “That’s our clientele. Those are our people. And it was for a great cause.”

Check salmon for pin bones rinse under cold water and dry with paper towels. Combine the rest of the ingredients in a bowl and mix well. Lay plastic wrap on workspace. Place half of the beet mixture on plastic wrap and spread the length of the salmon. Place salmon on top of beet mixture. Spread the other half of the beet mixture on top of the salmon evenly spreading across the whole filet. Fold in sides of plastic wrap tightly removing as much air as possible. Place in a pan or baking dish place another pan on top and weigh down with cans from the pantry. Refrigerate for 72 hours flipping every 24 hours. Unwrap salmon and gently rinse off cure. Slice thin and serve or rewrap and place back in the refrigerator for up to 4 days.

Pour milk into a pot stir in salt cracked pepper and minced garlic. Bring to a boil over medium heat. Stir frequently to prevent milk from scorching. When milk begins to boil remove from heat and stir in lemon juice and herbs. After 5-10 minutes the milk will curdle separating the curds from the whey. Line a sieve or colander with cheesecloth and slowly pour milk through the cloth to catch the curds. Gather the cloth around the cheese and squeeze out whey until desired texture and creaminess is achieved.