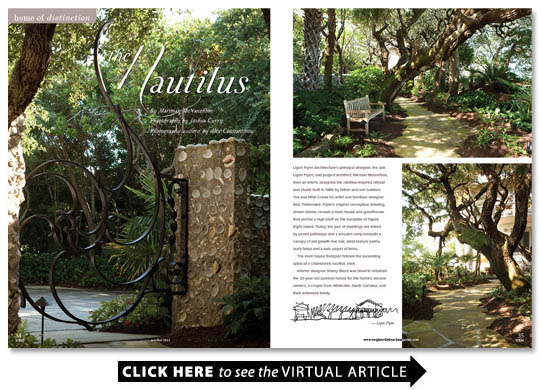 Ligon Flynn Architectures principal designer the late Ligon Flynn and project architect Michael Moorefield then an intern designed the nautilus-inspired retreat and studio built in 1980 by father-and-son builders Ted and Mike Crews for artist and furniture designer Bob Timberlake. Flynns original conceptual drawing reveals a main house and guesthouse that anchor a high bluff on the backside of Figure Eight Island. Today the pair of dwellings are linked by paved pathways and a wooden ramp beneath a canopy of old growth live oak amid mature palms leafy fatsia and a lush carpet of ferns.

The main house floorplan follows the ascending spiral of a chambered nautilus shell.

Interior designer Sherry Black was hired to refurbish the 33-year-old summer house for the homes second owners a couple from Whiteville North Carolina and their extended family.

Light pours into the dining area from the transom and clerestory windows from the enclosed wrap around porch and the west deck.

Sweeping views of the marsh open to the west while the entire area is open to the living room and kitchen. The custom dining table was made in Whiteville. The cedar pendant lighting fixtures designed by Sherry Black were fabricated in New Hampshire.

The rustic beachy finish was originally paired with pickled wood and finishes in the homes second story living room.

In this space Blacks restoration of the ceilings reintroduces warmth into the natural palette and showcases the architectural detailing.

Black hired Stephane Bossut to fabricate built-in cabinets that reiterate the angle of the doorframes. Designing the upholstered furnishings herself Black developed her color palette around tonal blues pops of red and orange subliminal green and in the master bedroom a touch of gold. John Lester upholstered the chairs and Diane Britt custom made the throw pillows.

Ligon Flynn noted for his breathable spaces designed a screened porch wrapping the south and west elevations that Timberlake later enclosed with glass to extend the conditioned living areas.

I kept everything as true to Ligon Flynns original architecture as possible Black says. Ive tried to keep as much Americana as possible because Mr. Timberlake is so Americana.

Timberlakes studio features a seating area around a tabby fronted fireplace. The 16th century French winery mantel was brought back to the states by Timberlake. The exposed beam bears his handwritten signature.

Black says her client wanted the room to feel more like a boat with a loyal nod to the architectural integrity of the house.

Black has retooled Timberlakes original studio space with built-in sapele wood bunks for the homes new owners and their growing brood of grandchildren.

Spiraling up a staircase to guest bedchambers inside the split-leveled dwelling the tabby walls secrete hiding spaces inside clamshells and hidden handholds rendered in conchs. Timberlake strategically placed full-sized shells into the crusty shell and masonry tabby finish. The more you look at it the homeowner says the more you find different kinds of shells. He was obviously a big shell collector.

With floor to ceiling windows that look across the marsh islands diffused northwest light fills an octagonal room at the ground level where Timberlake did all of his painting when in residence.

Purchased in 2011 Timberlakes former compound is screened from the street by high tabby walls and gated with custom-made wrought iron nautilus and scallop shell emblems.

The Design Studio and Workshop