The Market is Looking Up: 12th Annual Real Estate Roundup 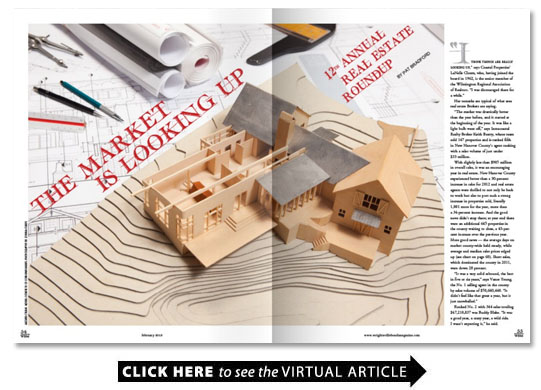 I think things are really looking up says Coastal Properties LaNelle Clontz who having joined the board in 1962 is the senior member of the Wilmington Regional Association of Realtors. I was discouraged there for a while.

Her remarks are typical of what area real estate Brokers are saying.

The market was drastically better than the year before and it started at
the beginning of the year. It was like a light bulb went off says Intracoastal Realty Broker Keith Beatty whose team sold 147 properties and is ranked fifth in New Hanover Countys agent ranking with a sales volume of just under $33 million.

With slightly less than $905 million in overall sales it was an encouraging year in real estate. New Hanover County experienced better than a 30-percent increase in sales for 2012 and real estate agents were thrilled to not only be back to work but also to post such a strong increase in properties sold literally 1 001 more for the year more than a 34-percent increase. And the good news didnt stop there; at year end there were an additional 645 properties in the county waiting to close a 43-percent increase over the previous year. More good news the average days on market county-wide held steady while average and median sales prices edged up (see chart on page 60). Short sales which dominated the county in 2011 were down 28 percent.

It was a very solid rebound the best in five or six years says Vance Young the No. 1 selling agent in the county
by sales volume of $50 660 440. It didnt feel like that great a year but it just snowballed.

Continuing its climb from the bottom Wrightsville Beach saw more than $95 million in sales which is up more than 47 percent over 2011. Units sold were the best in many years 129 total a strong 45-percent increase.

It was a good year Intracoastal Realtys Debbie Mitchell says. It is starting a slow uphill return. She held on to her No. 2 spot in Wrightsville sales and while edging down in the top agent ranking for New Hanover County her $26 million sold volume was still stronger than the previous year. People are not so nervous about the economy. They dont think the sky is falling anymore she says.

Twenty-twelve was a year of realistic sellers and optimistic buyers. The sellers got in sync with the market pricewise and the buyers realized that bottom feeding in most cases was not going to get them a house at Wrightsville Beach Randall Williams says. He is the Broker-in-Charge at team Hardee Hunt and Williams the top selling team on Wrightsville as well as the third selling team in New Hanover County with $35.7 million in sales of which $32.65 million were Wrightsville Beach sales. Williams direct wisdom gained by 30 years of working the same locations continues to be dead-on with what is happening in real estate.

We thought the market might slow up in the run up to the election and it went the other way. We brokered an oceanfront property on Christmas Eve if that tells you anything about the enthusiasm in the marketplace Williams says.

Wrightsville Beach saw 26 sales of a million dollars or more. The top sale in the town showed a modest but hopeful 8.8-percent increase over 2012 with the sale of 14 South Ridge Road a 4 890 sf 6-bed 6-bath plus 2 half-bath beach home. This was the No. 2 sale in the county see the chart page 59.

Of the remaining 25 big-ticket sales another oceanfront 5-bed 6-bath home located at 823 South Lumina Avenue brought its seller more than $2 million and this bank-owned sale was No. 5 in the county.

The number of bank-owned foreclosure and short-sale properties are drying up all over the county. Foreclosures and short sales continue to be a factor but much less so than in 2011. The year saw just 10 short sales 47-percent less than 2011 and 95-percent less than the 2009 low point. Foreclosures are on the decrease with 9-percent fewer recorded with the New Hanover County Clerks Office.

The average and median sales prices were also up as was the average list price of $925 012.

Continuing the good news the market was drying up with just 121 listings available to buyers at years end.

In some cases sellers had multiple offers and buyers paid what it took to get a property Randall Williams says.

Wrightsville Beach saw 129 Realtor-assisted sales. That number breaks down as follows: free-standing single-family homes numbered 46 of which 12 were on Harbor Island and 34 on Wrightsville proper. Averaged separately excluding all condo
rentals and townhomes the average price of a single-family free-standing home sold was $1 188 685.

We dont expect anything crazy but we will not be surprised at a continuing trend of modest appreciation; in fact we have already seen it in some sections of the market especially the high-end waterfront properties Williams says.

Waterfront continued to bring the top prices with five of the 12 Harbor Island residential sales being waterfront on the sound four with boat docks and three additional were sound view. Just four had no views.

Additionally 25 sales were duplex units not in a planned unit community. Of these just four had no water view at all. Four were oceanfront. Seven were ocean view three sound view. Three additional had both ocean and sound views. Three were waterfront/soundfront with boat dockage. Selling for $1 158 000 without a boat slip or dock was a waterfront duplex 8A Marina Street which was the top single duplex unit sale with 3 550 sf of soundfront living overlooking the activity of Wrightsville Marina and the ICWW just south of the drawbridge.

Condos or townhouses in a planned community accounted for 48 sales and of these 98 percent had views of the water including rental units (two were Waterway Lodge units located west of the drawbridge but still in the towns corporate limit).

There were three oceanfront fractional vacation ownership sales handled by Realtors; two 1/10 ownership (Sea Oats and Shearwater Street) and one 1/25 ownership at Duneridge Resort which sold for $187 000.

The entry-level price point located on Wrightsville Beach was 23 West Greensboro Street which at $187 per sf sold at the lowest price per square foot in single-family homes for the year. It sold at $410 000 on April 27.

As the beach changes in character older homes are scrapped for construction of more modern and often larger homes. The year saw a trio of oldies sold two of which will survive intact at the same location while the third will be relocated.

In what may be the best buy of the year the 1938 classic located at 5 East Charlotte Street the 4-bed 3.5-bath Bodford Cottage which had already been renovated sold for $675 000 on June 4. The cottage only a handfull of houses from the beach features a wrap porch and an ocean view.

Next the 1940 historic Sprunt-Willetts Cottage soundfront between the bridges on Banks Channel at 207 North Lumina Avenue sold October 9 for $1 375 000 following approval by the board of aldermen to restore elements of the historic home located within the towns street-end easement. This 4-bed 4-bath with deep porches is in the process of extensive renovation.

And last but not least a great new life awaits the 1946 Palmgren-OQuinn House at 115 South Channel Drive. The historic soundfront doctors home on Banks Channel is being moved offsite to the towns historic compound to be used as the headquarters for the North Carolina Coastal Federations southeast office. The home split from its adjacent lots sold for $1 521 000. The two additional lots sold for $$850 000 and $405 625 respectively.

Buyers are realizing that the bargain prices are slipping away and sellers are firming up on their prices Randall Williams says.

There may be an occasional one here and there but the super-duper giveaway deals are probably gone Debbie Mitchells says.

We believe the nightmare of this financial train wreck is over and we expect sanity to return to the real estate market in 2013 Williams says.

I feel this county has a very good chance of doing well because of the topography LaNelle Clontz says.

While Brunswick Pender and New Hanover County performed well in 2012 and inventories have dropped toward healthier levels New Hanover County had the largest drop ending the year with 7.5 months of supply. Thats the lowest level since 2007 Chris Livengood says.

Vance Young pretty much doubled his business for 2012 knocking back sales totaling $50 666 000 in 93 transactions 57 percent of which he cites as Landfall sales.

In the first three weeks of January we had five sales over $1.7 million all the way up to $2.7 million in Landfall. That sale on Ocean Point (No. 7 in the county see chart on page 59) gave people confidence kind of set the bar. Each deal in 2012 was a benchmark for buyers Young says.

It was remarkable Allison Bernhart says of the sale The house had been on the market forever. And not only did they pay $2.5 million for it but they are renovating spending more money on it.

The upscale gated community of Landfall saw sales totaling more than $64.6 million up 43 percent from 2011. Volume in the number of properties sold also increased an astounding 85 percent over 2011 plus a healthy 17 were waiting at year-end to close.

Of the market there Young says I have been here doing this 25 years. Our supply here has gone from 6 000 a few years ago to 3 200 units for sale. Supply and demand are meeting.

Right now we have 13 houses in due diligence nine pending which is about double what we normally have Bernhart says.
For January thats huge.

We have seen a continued increase in the average sales price of homes and in the number of transactions says Judy Parlatore of Figure Eight Realty. The firm is on island.

Parlatore and her coworkers Jo El Skipper and Kirra Sutton sold the two top properties there one of which was the top sale in the county a 4-bed 6-bath oceanfront home at 204 Beach Road North selling for $3.2 million.

In 2012 we had two transactions that were greater than the highest sales in 2011 they said about the robustness of the market there.

Pleasure Island saw strong increases as well with a $19.4 million increase from 2011 which was a 41-percent increase over 2009 sales.

Twenty-five percent of all the closings was either a short sale or foreclosure says Sharon Laney co-owner of Prudential Laney Real Estate and sales manager of the Carolina Beach office. But now that inventory is drying up we will get back to a normal market when properties are not a foreclosure or short sale she says.

Porters Neck saw a strong 76-percent increase in the number of properties sold along with 16 additional sales waiting to close but prices have not stabilized there. That community saw a decrease in the average and median sales prices. Porters Neck and Bald Eagle Lane caught a lot of attention at the end of the year because of the water there. Several contracts for waterfront and golf course properties came in at the end of the year said Chris Livengood vice president of sales at Intracoastal Realty.