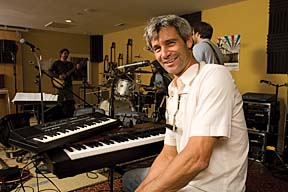 Kevin Rhodes has an eye for potential. The home improvement specialist and professional musician has been a fixture in the local music scene for many years. When he found his historic Carolina Heights home he saw the potential to make the 1917-built bungalow a new cornerstone of the local music scene as well as a place where he and his friends and bandmates could come together to make music art and good times.

Combining his home improvement knowledge with his artistic talents Rhodes built a fully functional recording studio including proper custom soundproofing — double drywall and air gaps in the construction. Rhodes admits that when he and the other members of local band Lamont Skylark get together to create their folk-rock sound — reminiscent of national acts Wilco and The Avett Brothers — the “neighbors can probably hear a bit but it’s not obnoxious.”

His new home studio is quite an improvement over the band’s former practice space near Greenfield Lake which had neither the charm utility nor the running water of Rhodes’ new space. The studio comes replete with an engineer booth/guest bedroom that includes a window to the studio proper.

The studio is also filled with vintage guitars tweed-fronted amps Hammond organs pedal steels and the other trappings of dedicated musicians who appreciate the quality of a well-worn fret-board a tube amp and a collection of rugs that begs a musician to experience the joy of playing barefoot in front of a roaring fire.

Among the mish-mash of vintage amps are a few of recent vintage. Friend and fellow tube aficionado Michael Swart handcrafts near-custom “Swart-Tone” amplifiers in the old-school way eschewing solid-state electronics for the warm tone and sound that only vacuum tubes can provide.

Rhodes says the best thing about having a recording studio in his home is that it allows him the peace of mind serenity and general good feeling of knowing his equipment is safe a constant problem at his former practice space. “You can just relax with your friends and create art together ” Rhodes says. “It’s great to have a work space in your own home … if you can call it work.” 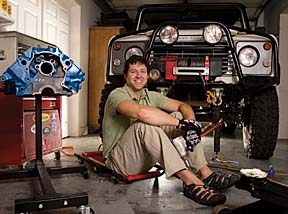 Sometimes the Man Room itself is less important than the product created within its confines. This is the case with local dentist Bryan Tate’s garage. The creations made in this simple three-car garage attached to his Shandy Point home defy convention. With not much more than the tools you’d find in your own garage serial car restorer Tate created a Frankenstein’s monster of a Land Rover Defender 110 from the frame up melding and welding parts from dozens of different Rovers from around the country.

But he was just getting started. Tate followed the Defender with a rebuild of a 1965 Ford Mustang Fastback. As the project neared completion he arranged to sell the hot rod to local celebrity Chad Michael Murray (of the locally filmed drama One Tree Hill) who then gifted it to co-star and then-girlfriend Sophia Bush.

Often Tate will restore a classic auto and then trade that up for a different class of car — like a Porsche 911 Carrera. Some of his projects though stay right there in the garage — for instance his current Land Rover Defender 90 which he stumbled upon on Harbor Island. That Rover wasn’t running but was in otherwise reasonably good condition. It remains an ongoing project with engine and transmission improvements planned for the near future.

For Tate besides the satisfaction of rebuilding a classic vehicle from the ground up there’s also a social aspect to the work at hand: Friends and fellow gearheads stop by on occasion to share their skills camaraderie and enthusiasm for the oily arts. “The garage is kind of like a clubhouse at times when friends stop by ” Tate says.

Tate also enjoys the family aspect of his hobby. He recently introduced his 2-year-old son Ford (the name a happy coincidence) to the ways of the wrench and the two are rebuilding a new project: a 1967 Mustang Fastback. 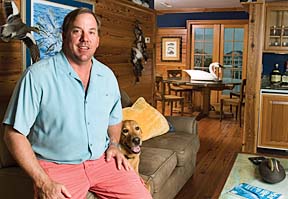 Perched atop his stunning and flawlessly decorated Figure Eight Island home Richard Black has fashioned a poker room that would be the envy of Las Vegas poker professionals and The Donald himself.

Like the cherry on top of a delicious confection Black has created a jaw-dropping poker room that melds family history nautical themes and memorabilia with 360-degree water views. The result is a poker oasis that no doubt gives him an advantage against friendly opponents who don’t see that kind of splendor every day. Add recessed lighting and speakers his collection of art waterfowl decoys and treasures from his ramblings around China and Africa and you have a truly spectacular and unique location.

The sense of history is immediately evident. Photos of Black’s grandfather a member of the prestigious Southern California Tuna Club pictured with trophy catches and fishing outings with famous manly men like Zane Grey and Ernest Hemingway cover the poker room walls. As Black describes it: “It’s great to have a place that celebrates my grandfather’s love of sport fishing and how it was way back then using cane rods and thumb-stop reels.”

The room is built with beautiful pinewood re-purposed from the barrels of a bourbon distillery gorgeous suede furniture and items with nautical themes — from fish chairs to the poker table itself a glass-topped beauty resting upon a ship’s wheel. The coup de grâce: French doors leading to balconies overlooking the water in any direction.

Black enjoys relatively frequent poker games with island friends and guests from around the state so his Man Room comes complete with a vintage shotgun often used to keep order in the rowdy poker rooms of the past. Black maintains the shotgun is merely decorative — and poker players never bluff right? 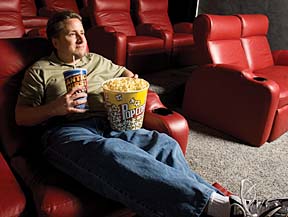 Bow down audiophiles home theater lovers and big screen sports fans. You’ve been bested. You just don’t know it yet.

With a home theater that outclasses many local movie theaters Kevin Gray’s Masonboro Forest Man Room stands head and shoulders above most any setup you’ve seen outside of Los Angeles.

Gray’s home was essentially built around this media room which features three outside walls and extra sound dampening in the ceiling to minimize any sound bleed to the rest of the house as well as its own separate air conditioning unit to cut down the heat generated by all of the state-of-the-art electronics.

With three tiers of seating in 13 comfortable leather recliners (with electric recline) Gray’s audio-visual experience ensures that the Super Bowl party is always held at his house. Add in 100-plus inches of true HDTV projection at 1080p and you’d be hard-pressed to find a better place to watch a Carolina basketball game.

What propels this Man Room into a category of its own is more than just attention to detail. Nevermind the 7.1 surround sound and superb a/v experience the exit lighting wall-lighting sconces and general over-the top nature. Gray’s wife Chris sums it up best: “When he’s out of town we have a 15-person girls’ night at the movies in here.” 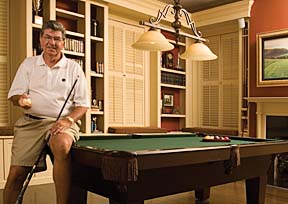 Ron Pickett has a Man Room of historic proportions.
His wife Cindy says it’s her “least favorite room in the house ” and she may have a point. Not that Ron’s billiards room isn’t awe-inspiring in its own right it’s just that the rest of the beautifully carefully and lovingly-restored Governor Dudley Mansion on South Front Street is beyond stunning beyond beautiful and beyond belief.

When the Picketts bought the Federal-style mansion in 2005 the once-majestic manse was in tatters. Years of abandonment and neglect a series of hurricanes and a general lack of upkeep had left the mansion a battered hulk of its former self.

Years later intensive and careful rehab and restoration have brought the historically-important house back to its former glory.

Situated on the main floor of the manse tucked away behind the formal dining room and the site of the former Governor’s office is Ron’s billiards room. It is stunning from the ground up. The darkened beautiful oak floor remains the same as it was when Edward Bishop Dudley governed North Carolina in the 19th century. The floor was crafted from locally cut trees milled on site and installed using face nails a tradition long since past.

Working with a talented and exacting local carpenter Mike Lewis Pickett ripped out a number of what he describes as “very-’70s” bookcases replacing them with newly crafted shelves more in keeping with the design and period of the house. Lewis also fashioned custom cue stick holders recessed into the walls of the billiards room. Cindy added window seat cushions giving the room a clubhouse feel.

The centerpiece of the room is the 8-foot Olhausern pool table where Pickett and his friends get together for semi-regular games. Pickett explains with a shrug “It’s supposed to be a monthly thing but you know how that can be.”
Mounted on the wall above the fireplace is a prime example of a husband and wife working together for a common goal. As Ron says “My wife hates to look at random televisions which is understandable considering the historic nature of the home.” They compromised on what is called a Vision-Art system. This ingenious setup includes a retractable painting that hides Ron’s HDTV when not in use. The painting is a beautiful rendition of the legendary Torrey Pines golf course set upon the dramatic cliffs of the Pacific coastline near San Diego California. In particular it is the signature third hole a favorite of Ron’s son Marshall a professional golfer by trade.

Pickett’s Man Room adds one extra convenience: an ensuite bathroom a Man Room-Bathroom if you will. Like everything else in the Dudley Mansion this is no run-of-the mill bathroom. As Ron puts it “This was the very last decision we made about the house. Being a historic house this is the only bathroom on the ground floor so it had to be special.”

While visiting Chapel Hill’s posh Siena Hotel the Picketts saw exactly what they wanted for their billiard room bathroom and again they went to Lewis for the execution. He created a flawless reproduction of the wainscoting already in the hallway leading to the billiard room and planned to add Italian marble from the wainscoting to the ceiling. The historic methods used in the room in its original construction posed a challenge to creating the look they found in Chapel Hill as marble couldn’t be tiled in some of the tighter areas of the bathroom. Undeterred the Picketts commissioned artist Jan Miles who created a trompe l’oeil-worthy faux-marble finish nearly indistinguishable from the real thing.

Much like the rest of the glorious gem that is the Dudley Mansion it must be seen to be believed.

Everyone has an ideal vision for a room of their own. These gentlemen have a head start on the rest of us and they share more than their dedication to manly themes and Man Rooms. Each to a one humbly said their Man Room “wasn’t anything special.” But as we all would probably agree each one of them was wrong.