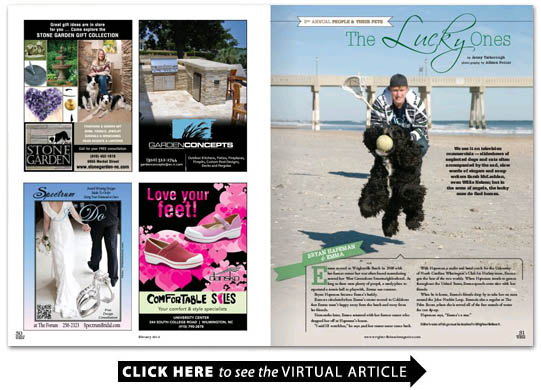 We see it on television commercials slideshows of neglected dogs and cats often accompanied by the sad slow words of singers and songwriters Sarah McLachlan even Willie Nelson; but in the arms of angels the lucky ones do find homes.

Emma moved to Wrightsville Beach in 2008 with her former owner but was often found meandering around her West Greensboro Street neighborhood. As long as there were plenty of people a sandy place to squat and a tennis ball to play with Emma was content.

Rumors circulated when Emmas owner moved to Goldsboro that Emma wasnt happy away from the beach and away from her friends.

Six months later Emma returned with her former owner who dropped her off at Hapemans house.

“I said Id watch her ” he says and her owner never came back.

With Hapeman a surfer and head coach for the University of North Carolina Wilmingtons Club Ice Hockey team Emma gets the best of the two worlds. When Hapeman travels to games throughout the United States Emma spends extra time with her friends.

When he is home Emmas friends drop by to take her on runs around the John Nesbitt Loop. Emma is also a regular at The Palm Room where she is served all of the free rounds of water she can lap up.

Editors note: all dogs must be leashed in Wrightsville Beach.

Bob and Cherie Simpson & The Pack

Feeding time in the Simpson household is an assembly line process. Nighttimes are never spent alone with The Pack as Bob Simpson refers to his six rescued dogs Jake Tanna Jessie Maybelle Pistol and Wilson. Every dog has a designated bed on or around the couples king sized one.

Every pet has a special place in the Simpsons hearts but life for The Pack wasnt always so sweet.

The Simpsons first rescue was a miniature dachshund named Heiney left with the newlyweds during the time that Bob a retired U.S. Air Force colonel was stationed in Japan in 1988.

“It was about 9 oclock on a Sunday night ” Bob recalls “and a Japanese man rode up on his bicycle with this dachshund in a bag and he said Please take this dog because we dont have any home for it.”

After hearing the mans story of a broken family Bob and Cherie acquiesced. While Bob was on temporary duty for six weeks in Thailand Cherie adopted another dog rescued from a puppy mill. They named the yellow lab H.P. which was short for Heineys Pal. Later the Simpson household welcomed Michelob Frank Hilde and Nibbles.

Just like the first each successive pup uniquely found its way to the Simpsons from the roadside via the Internet or castaway by their owners at Forest Hills Veterinary Hospital where Cherie works. One even came from the midst of a Bicentennial parade found tied with a string attached to a purple balloon. Many were injured; others were neglected or abused.

One of Maybelles rear legs was shattered her face scarred. Her prognosis was dismal but Bob says she runs with the rest of them now.

Pistols skull was punctured in two places from an encounter with another pit bull. His diagnosis was also grim.

“Everybodys got their thing ” Bob explains. “I guess mine is taking care of my friends.”

Some of his four-legged friends get the chance to go to work with him at Wrightsville Beach Town Hall. When they dont Bob admits to consoling himself with a photo of Michelob his best friend.

“Im convinced that over the years hadnt I had them to go home to sometimes life would have been very much more difficult. I heard somebody say one day Dogs cant show love and I would challenge that.”

When former Wrightsville Beach Alderman and New Hanover High School Spanish teacher Catherine “Kitty” Brunjes was a little girl her dad nicknamed her Kitty. She didnt like the name very much but it stuck and as it turned out Kitty would suit Catherine better than her father could have ever predicted because Kitty cares for Wrightsville Beachs feral cat community.

Kitty Brunjes has three indoor cats: Fluffy Smudge and Maddie; five outdoor cats Squid Tiger Blacky and B.W. and then there is Yellow Boy. First discovered by Susan Hur behind the Wrightsville Beach Museum of History all appeared to have been owned and abandoned.

Hur and Brunjes took turns feeding the cats which could later be trapped. With the help of Dr. Paul Gigliotti of Forest Hills Veterinary Hospital they were fixed and adopted.

But every year as college students migrate off the beach Brunjes finds more cats resulting in more feedings and more scouting for suitable owners to adopt.

“Ive been doing it a long time and I dont know exactly why. It just seemed natural ” Brunjes says as her name implies “seemed like something I was supposed to do.”

When Wrightsville Beach Mayor David Cignotti married his wife Susan Creasy she came as a package deal with a cat named Moses who lived for 21 faithful years.

David and Susan decided it was time for a dog. None of the dogs at the Topsail Humane Society quite fit the picture they had imagined so David and Susan headed for the door.

As they got to their car a woman who had been showing them around came running out saying “I think Ive got one you want to look at.”

She brought out a short but long black dog with wild hair. Immediately David said “Thats what Im looking for ” and Sparky came home to Harbor Island.

When Susan thought Sparky needed a friend Susan and an Adopt-an-Angel volunteer began to look in PawPrints Magazine. Bringing home a dog with one floppy ear named Snow Bunny Snow Bunnys name was changed to Sandy because the beach is no place for a snow bunny.

Beach Kitty was once a stray that found a home at Sweet and Savory where there were always plenty of scraps. Eventually one of the waitresses claimed her and brought her home to the south end of Wrightsville Beach. But Beach Kitty didnt fit in with her new owners two large dogs; and Sara Hardy who lived a block away noticed her roaming around. Luring her to safer territory Sara began to leave food on her porch and slowly but surely Beach Kitty found comfort and a new home on Schloss Street.

“I moved in with my sister in 2007 ” Saras sister Anna Hardy explains “adopting partial ownership of Beach Kitty.”

Though she found love in the Hardy sisters Beach Kitty wasnt shy about finding other laps to sit on through the summers. During Beach Kittys long forays Anna recalls catching her cat “bronzing with boys on the beach.”

Last year during a trip to PetCo Anna spotted another feline in need. Volunteers with Adopt an Angel told her that this particular kitten and the rest of the litter were found abandoned on Red Cross Street. Anna thought of Beach Kitty and adopted her sister Sushi.