The Little Cottage That Could 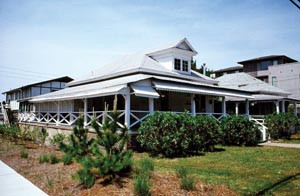 Traffic stood still and the town held its breath as the little Myers Cottage a summer cottage built in 1907 was carefully hoisted onto a trailer and moved from 124 S. Lumina to its new location on Salisbury Street. She had seen and heard a lot in her day the music of Benny Goodman and Cab Calloway from the Lumina ballroom the shuffle of a late-night fox trot on her wooden porch and the rumble of the trolley cars as they delivered summer visitors. She was now too small and decrepit for her owners and would soon be replaced by a bigger more efficient house. But there was a small group of locals who loved her worn floors and creaking screen doors and they had big plans for the little cottage. She would become the Wrightsville Beach Museum of History. 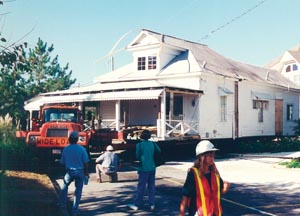 Although petite in stature she was the fourth oldest cottage on the beach the day she left her Lumina home in the spring of 1995. Men in hard hats walked alongside and in front of the little cottage as it inched its way across the bridge at Banks Channel to its present-day location a parcel of land owned by the Town of Wrightsville Beach on Salisbury Street and leased to the Wrightsville Beach Preservation Society. Today the Preservation Society has been dissolved and the lot is leased to the museum.

About 18 years ago Greg Watkins who restored the 1910 Tarheelia Inn on N. Lumina and later wrote Wrightsville Beach A Pictorial History founded the Wrightsville Beach Preservation Society hoping to spark public interest in the history of the beach and to encourage others to save the old cottages and historic landmarks from destruction. Bill Creasy Jr. the local go-to-guy for Wrightsville Beach lore and history agreed to serve as vice president of the four-person volunteer group. Creasy was the perfect choice to help spearhead the preservation effort.

“My grandparents moved to Wrightsville Beach in 1915 and lived on Columbia Street right down here ” says Creasy from his home overlooking Banks Channel. “My dad bought a house on Charlotte Street in 1926. I was born in 1928 and that was about my first summer down here. It was a little cottage that was not winterized or anything. We lived in Wilmington and wed move down here to the cottage on Memorial Day and move back on Labor Day.” 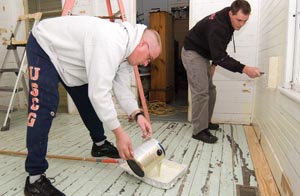 Boxes of old photographs depicting life at the beach in the early 1900s had been passed down to Creasy from his father and in 1992 Watkins and Creasy enlarged the old black-and-white photos for display on the west side of Newells Wrightsvilles iconic department store and then again at Wynn Plaza where the town boat dock is today. It was probably the first time that newcomers and tourists got a glimpse of life on the beach before automobiles and paved roads.

“Before the Wrightsville Beach Preservation Society was formed nobody seemed to have an interest in the old times at the beach ” says Creasy. Lumina had been demolished in 1973 but local apathy toward the increasing loss of historic homes and structures finally hit a nerve when their beloved Newells was replaced by a flashy beach chain store Wings. Virginia Whiting Kuhn writes in her book commissioned by the museum Tide and Time A History of Wrightsville Beach North Carolina: “Many residents first opposed what they believed to be a gross commercialization of the beach with the arrival of the chain but when Wings lit up the exterior of the building with a wattage that rivaled that of Lumina residents went up in arms.”

After much persuasion by the Preservation Society and boycotting by the locals the store turned down its lights but a fire had been stirred within the Preservation Society and it began looking for a new home in which to meet and showcase the beachs history. “Oh we didnt have a dime back then ” says Creasy. “We were just starting out. All we had was the fee for the memberships.”

Finally the Preservation Society gathered its monetary forces promoted the first Lumina Daze Historic Celebration in 1994 and gratefully accepted the donation of the Myers cottage from the Burgess and Greiner families. The cottage would be transformed into a museum.

From S. Lumina the little house was carried on a flatbed truck across Banks Channel Bridge through the Town Hall parking lot and finally to its current home on Salisbury Street. “The funny thing is that when they started moving it ” says Creasy smiling to himself “Greg and I got on the porch and sat in the rocking chairs the whole way over there. It was real funny.”

Renovation was extensive on the almost 100-year-old cottage but plumbers electricians and volunteers answered the call. “Wright Holman was very active in helping us get it set up carpenter wise and structural wise. But thats the way it was. We had different volunteers come in and do this or that the Coast Guard did a lot of painting. They completely painted the place.”

Welcome to the Museum

With Watkins as its first museum director the little cottage with her shady porches and green and white awning opened her doors in 1996 to welcome one and all to the Wrightsville Beach Museum of History. 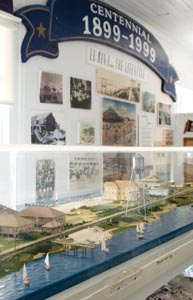 The museums mission was to preserve and share the history of Wrightsville Beach by giving visitors a peek into the everyday lives of people who lived and vacationed at summer cottages during the turn of the century from a ladies bathing costume drying over a claw-foot bath tub to the kitchen with its white enamel sink to the screened porch and its indispensable ice box. A 12-foot model of the beachfront circa 1910 built by Creasy Wes Haubner and Maricam Kaleel of Model Makers is a centerpiece of the museum. And with one push of a button visitors can see and hear an oral history video of life in the days gone by.

Since its inception the museum has had the expertise and enthusiasm of several museum directors and boards of directors to steer its course. Some of the challenges facing the museum today are quite different from when the museum started out 14 years ago: How to increase membership? How to archive the mountain of documents photographs oral histories (recorded on tape) books and items donated to the museum? How to get the community interested in the past?

“Were kind of a welcoming center and were also a repository for beach history ” says museum director Madeline Flagler from her office at the museum. “But any small museum really needs to have a connection to the community and to have a role in the community. I see my role as trying to figure that out.”

Flagler joined the museum last summer as July visitors and day-trippers were beeping and pushing their way in droves across the drawbridge. Flagler hails from the Bellamy Mansion in Wilmington where she was the education director. “Were doing well on fundraising. We have a good core of volunteers a good connection at UNCW and we have a strong board (of directors).”

and community are two words that Flagler uses often when describing the future of the museum. She believes that community support is crucial for its success. Flagler is also a proponent of making connections beyond the board and the beach. The connection shes made at UNCW for instance involves the input of public history students who help with archiving document preparation and research. “When someone comes in well have files of information and photos on places that might not exist anymore like the Kitty Cottage.”

Flagler recently put in a request for a collections assessment plan through the Institute of Museum and Library Services. “Theyll have someone come in and look at our building since its more than 50 years old and because its housing the collection. Itll be great to have a road map.”

But despite all the good things happening at the museum Flaglers arrived during the Great Recession when as she says “museums in general are struggling. We really have to stay true to our core. If youre not a value to your community you wont make it.”

The Town of Wrightsville Beach now under the direction of Mayor David Cignotti supports the museums efforts at historic preservation. This year the planning board is considering new ideas for non-conforming structures “to encourage people to meet current codes but give people leeway to preserve the older homes ” says Cignotti a former museum board member. “We want to have some flexibility with our non-conforming structures.”

Jane Hardwick board member and lifetime resident of Wrightsville Sound understands the importance of reaching beyond the beach community and toward what Flagler describes as other “audiences.” In the last few years the museum has sponsored several events: the 5K Jingle Bell Run Lumina Daze which raised $12 000 last summer a Claude Howell exhibit and an afternoon of painting the cottage by Wrightsville Beach School students. “It brought in some people that maybe hadnt checked out some exhibits before then ” says Hardwick. “So we want more events that would pull in more families children and adults.”

Today the museum has a neighbor the old Howell Cottage which was moved renovated and turned into the Chamber of Commerce and Visitors Center. Nancy Faye Craig board member for the museum and a former member of the Historic Landmark Commission says the board would like to see two more cottages moved to Salisbury Street in hopes of creating a historic village. Craig says the cottages could house other nonprofit organizations like the Surfriders Foundation or the Holiday Flotilla.

The additions would also give the museum some room to entertain larger audiences which has been a problem in the past. “I could envision four houses with porches and a common area ” says Hardwick. “Its a great way to bring together old-time beach residents and new beach residents to listen to the stories of the old timers and just appreciate the history of the beach.”

History is important to Wrightsville Beach because it gives the town and its citizens a sense of place says Mayor Cignotti. “Whether it is holding a barbecue with a guest speaker featuring the works of a noted artist inviting school children to tour the Myers Cottage or holding the renowned Lumina Daze the museum has become an integral part of our community.”