The Life of Reilly 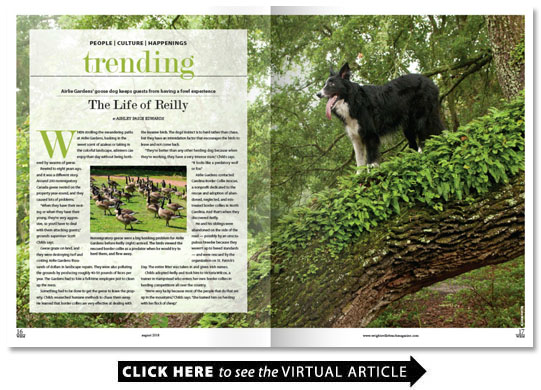 When strolling the meandering paths at Airlie Gardens basking in the sweet scent of azaleas or taking in the colorful landscape admirers can enjoy their day without being bothered by swarms of geese.

Rewind to eight years ago and it was a different story. Around 200 nonmigratory Canada geese nested on the property year-round and they caused lots of problems.

Geese graze on land and they were destroying turf and costing Airlie Gardens thousands of dollars in landscape repairs. They were also polluting the grounds by producing roughly 40-50 pounds of feces per year. The Gardens had to hire a full-time employee just to clean up the mess.

Something had to be done to get the geese to leave the property. Childs researched humane methods to chase them away. He learned that border collies are very effective at dealing with the invasive birds. The dogs’ instinct is to herd rather than chase but they have an intimidation factor that encourages the birds to leave and not come back.

“They’re better than any other herding dog because when they’re working they have a very intense stare ” Childs says. “It looks like a predatory wolf or fox.”

Airlie Gardens contacted Carolina Border Collie Rescue a nonprofit dedicated to the rescue and adoption of abandoned neglected and mistreated border collies in North Carolina. And that’s when they discovered Reilly.

He and his siblings were abandoned on the side of the road — possibly by an unscrupulous breeder because they weren’t up to breed standards — and were rescued by the organization on St. Patrick’s Day. The entire litter was taken in and given Irish names.

Childs adopted Reilly and took him to Victoria Wilcox a trainer in Hampstead who enters her own border collies in herding competitions all over the country.

“We’re very lucky because most of the people that do that are up in the mountains ” Childs says. “She trained him on herding with her flock of sheep.”

Reilly who lives with Childs and his family began patrolling Airlie Gardens’ 67 acres in September 2012.

There was an immediate reduction in the geese population after Reilly went to work but it took some persistence to completely eradicate the fowl problem.

“It seemed like [the geese] knew when the weekend was when Reilly was not out here; 5 o’clock on Friday afternoon is when it seemed like they always came back in ” Childs says. “So we did it repeatedly.”

The process of herding the geese isn’t much of a spectacle. In fact Childs refers to it as anticlimactic.

“You’ve seen a dog chase a squirrel; it’s similar to that ” he says. “But being a herder instead of running straight at the flock he kind of tries to flank them because he’s really trying to get to the back side of them and push the geese toward me. The geese just see him as a predator or a threat and they fly away.”

Thanks to Reilly Airlie Gardens no longer has a problem with geese permanently nesting on the grounds. The birds soon got tired of returning only to be run off again so eventually they stopped coming back.

However due to migration the birds still arrive seasonally.

“The fall is when the migratory geese come in and the nonmigratory geese kind of jump on the bandwagon with them ” Childs says. “So there will be huge flocks of them coming in and it will be a mixture of migratory and nonmigratory. In the spring it’s usually pairs that come in because they’re looking to nest and lay their eggs.”

These are the times of year when Reilly is the most active working in tandem with Childs.

“I want him to actually work them so that they get the maximum intimidation out of it so I will maneuver him as close as possible before I command him to go ” Childs says.

Other migratory birds such as ducks and swans are part of the Gardens’ attraction rather than a nuisance. Because they feed on the water Reilly does not pose a threat to them.

With Reilly on patrol and the geese under control Airlie Gardens can maintain its beauty at a lower cost. Terrified guests destroyed turf and polluted walkways are no longer a problem.

While Reilly might seem vicious to the geese he greets people with affection and a need for attention. He does his patrols before the gates open but Airlie Gardens guests might catch him in the visitors’ center or riding around on a golf cart with Childs who loves to talk about his buddy.

“He’s very popular ” says Childs whose wife maintains the dog’s Facebook page. “When we’re riding around on the golf cart people call out his name. Even if they don’t know him people want me to stop so they can play with the dog. Locally I think there’s a lot of people that know him; when I go places and tell them I work at Airlie they’re like ‘Oh you guys have the border collie.’ And I’m like ‘Yeah let me talk about him.'”

The life of Reilly is a good one. He loves his job and his workplace.

“In the morning he gets very excited for the ride to work ” Childs says. “He comes out here in the early morning before the guests are here and he has free rein so for an hour he’s just running as fast as he can. And then at the end of the day he’s just as excited about the ride home. I think he’s got a pretty good life.”