The Lady was a Spy 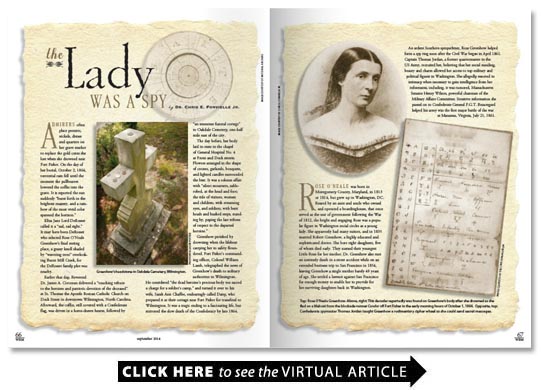 Admirers often place pennies nickels dimes and quarters on her grave marker to replace the gold coins she lost when she drowned near Fort Fisher. On the day of her burial October 2 1864 torrential rain fell until the moment the pallbearers lowered the coffin into the grave. It is reported the sun suddenly burst forth in the brightest majesty and a rainbow of the most vivid color spanned the horizon.

Eliza Jane Lord DeRosset called it a sad sad sight. It may have been DeRosset who selected Rose O Neale Greenhow s final resting place a grassy knoll shaded by wavering trees overlooking Burnt Mill Creek for the DeRosset family plot was nearby.

Earlier that day Reverend Dr. James A. Corcoran delivered a touching tribute to the heroism and patriotic devotion of the deceased at St. Thomas the Apostle Roman Catholic Church on Dock Street in downtown Wilmington North Carolina. Afterward the coffin still covered with a Confederate flag was driven in a horse-drawn hearse followed by an immense funeral cortege to Oakdale Cemetery one-half mile east of the city.

The day before her body laid in state in the chapel of General Hospital No. 4 at Front and Dock streets. Flowers arranged in the shape of crosses garlands bouquets and lighted candles surrounded the bier. It was a solemn affair with silent mourners sable-robed at the head and foot; the tide of visitors women and children with streaming eyes and soldiers with bent heads and hushed steps standing by paying the last tribute of respect to the departed heroine.

Greenhow perished by drowning when the lifeboat carrying her to safety floundered. Fort Fisher s commanding officer Colonel William Lamb telegraphed the news of Greenhow s death to military authorities in Wilmington. He considered the dead heroine s precious body too sacred a charge for a soldier s camp and turned it over to his wife Sarah Ann Chaffee endearingly called Daisy who prepared it at their cottage near Fort Fisher for transferal to Wilmington. It was a tragic ending to a fascinating life but mirrored the slow death of the Confederacy by late 1864.

Rose O Neale was born in Montgomery County Maryland in 1813 or 1814 but grew up in Washington DC. Reared by an aunt and uncle who owned and operated a boardinghouse that once served as the seat of government following the War of 1812 the bright and engaging Rose was a popular figure in Washington social circles as a young lady. She apparently had many suitors and in 1835 married Robert Greenhow a highly educated and sophisticated doctor. She bore eight daughters five of whom died early. They named their youngest Little Rose for her mother. Dr. Greenhow also met an untimely death in a street accident while on an extended business trip to San Francisco in 1854 leaving Greenhow a single mother barely 40 years of age. She settled a lawsuit against San Francisco for enough money to enable her to provide for her surviving daughters back in Washington.

An ardent Southern sympathizer Rose Greenhow helped form a spy ring soon after the Civil War began in April 1861. Captain Thomas Jordan a former quartermaster in the US Army recruited her believing that her social standing beauty and charm allowed her access to top military and political figures in Washington. She allegedly resorted to intimacy when necessary to gain intelligence from her informants including it was rumored Massachusetts Senator Henry Wilson powerful chairman of the Military Affairs Committee. Sensitive information she passed on to Confederate General P.G.T. Beauregard helped his army win the first major battle of the war at Manassas Virginia July 21 1861.

Our President [Jefferson Davis] and our General thank you. The Confederacy owes you a debt appreciative authorities informed Greenhow at battle s end.

Greenhow s espionage activities soon came under suspicion however and she was arrested by Allan Pinkerton only one month after the Confederate victory at Manassas. Initially placed under house arrest in Fort Greenhow as Union authorities dubbed her home she was eventually moved with Little Rose to the Old Capitol Prison. Ironically the military jail was the former boardinghouse where she was reared. For almost ten months the indignant and defiant Rebel Rose as she became known because of her allegiance to the rebellious Southern states was held in captivity. Due in part to her personal relationship with the powerful Senator Wilson Greenhow was released in late May 1862 but was exiled through battle lines to the South. She resided in Virginia and never returned to her beloved Washington.

Greenhow received a heroine s welcome in the Confederate capital of Richmond and President Jefferson Davis asked her to go to Europe to serve as an emissary to gain British and French recognition and intervention. In accepting Davis  offer she became the first official female ambassador in American history.

Greenhow and Little Rose booked passage for England on board the blockade-runner Phantom out of Wilmington in early August 1863. Representing Confederate interests with abiding loyalty Greenhow spent one year working tirelessly if unsuccessfully on her mission. She even found time to publish a memoir My Imprisonment and the First Year of Abolition Rule at Washington. In August 1864 she embarked on a trip back to the Confederacy.

Bearing both diplomatic and personal dispatches for President Davis Greenhow sailed from Greenock Scotland on the blockade-runner Condor making her maiden voyage. The Condor was a magnificent iron steamship — 270 feet long 283 registered tons and with three smokestacks — built exclusively for the blockade-running trade by Randolph Elder and Company of Govan Scotland. The ship was registered to Alexander Collie and Company a successful London-based importing and exporting firm and was captained by William Nathan Wrighte Hewett a highly decorated British naval officer on leave. Considered swift as a sea swallow and painted a dull lead color to avoid detection the Condor carried a large cargo of military supplies and uniforms for the Confederate army.

After a brief stopover in Bermuda the Condor steamed to Halifax Nova Scotia where she spent more than two weeks taking on coal and water and additional passengers. Joining Greenhow was Lieutenant Joseph D. Wilson of the commerce raider CSS Alabama freed on his word of honor after capture of his ship in France. Also joining the voyage was James Holcombe Confederate commissioner to Canada. They embarked from Halifax on September 24 bound for Wilmington.

The Condor managed to slip past Union cruisers prowling the shipping lanes off the North Carolina coast but as she approached New Inlet the northern entryway into the Cape Fear River before dawn October 1 1864 she was spotted and fired upon by the USS Niphon. The Condor suddenly turned hard to starboard and then came to a crashing halt. The pilot had inadvertently grounded the ship on a sand bar as he attempted to avoid hitting another blockade-runner the Night Hawk that earlier ran aground.

Fearing possible imprisonment and other dire consequences of capture Greenhow and Commissioner Holcombe implored Captain Hewett to get them ashore at once. The captain believed he could free the Condor on the next rising tide but in the meantime assured them that the ship was under the protection of the guns of Fort Fisher only 500 yards away. They persisted however and Hewett finally gave in to his panicking passengers. He deployed a lifeboat with sailors instructed to shuttle Greenhow Thomas Brinkman Lieutenant Wilson and James Holcombe to the beach.

Shortly after the dinghy was lowered to the ocean it capsized in rough surf. The men clung desperately to the overturned boat until waves pushed it onshore but Greenhow weighed down by her hoopskirt and corsets disappeared beneath the dark turbulent sea. Thomas Taylor an agent for the Anglo-Confederate Trading Company that owned the Night Hawk appeared on the oceanfront at daylight to supervise rescue operations for his company s stranded vessel. He claimed that he found Greenhow s body washed up on the beach. But Colonel William Lamb wrote shortly after sunrise on the morning of October 1 a stranger arrived dripping wet at his headquarters at Fort Fisher and identified himself as one of the party who in attempting to leave the Condor in a boat had been upset and barely escaped drowning; that he feared Mrs. Greenhow was drowned.

Lamb rushed to the beach only to find his soldiers had rescued Holcombe and the sailors but Greenhow was indeed missing.

Her lifeless body was soon found the colonel lamented the cruel waves having cast it up on the cold wet sands as the flowing tide came in. It was a sad a touching sight. Lamb speculated that the gold she carried may have contributed to her untimely death. One of the soldiers who found her body brought me a small satchel containing 100 gold sovereigns which had been suspended around the ill-fated lady s neck and which may have helped to drag her down when the boat upset.

According to family tradition the musket-bearer who found Greenhow s body was the soldier with the unique name Private J.J. Prosper For Me D. Doctor DeVowell Conner of Company E 36th Regiment North Carolina Troops. (It was said that Conner who apparently stood only about four feet tall was the shortest man with the longest name in the Confederate army.) His first thought was to keep the gold and he even buried it but his conscience or the prospect of punishment eventually got the better of him and he turned in the money for which he was allegedly awarded a $20 gold coin.

Adding to the legend of Greenhow s drowning was an account by a Late Confederate Officer who stated the gold she had sewed up and concealed about her person had borne her down and was the cause of her death; that had it not been for the weight she would have been saved. An 1864 gold sovereign held a value of $4.84 with each coin weighing 7.98 grams. If Colonel Lamb s recollection was accurate Rose Greenhow carried less than two pounds of gold hardly enough dead weight to have caused her to be dragged beneath the waves.

Colonel Lamb sent Greenhow s body upriver aboard the transport Cape Fear later that morning October 1. News spread like wildfire through the city so that by the time the Cape Fear arrived the docks were lined with distressed women and curious onlookers. Although Greenhow appeared to have no close acquaintances in Wilmington ladies of the Soldiers  Aid Society received her body and took it to the home of Mrs. DeRosset the organization s president and wife of a prominent physician at Second and Dock streets.

She was an elegant woman not at all changed by death DeRosset observed.

Little Rose was attending school in France when her mother departed England for the Confederacy and was devastated when the news reached her that her mother had drowned while trying to run the Union blockade of Wilmington. She and her two surviving sisters filed a bill of complaint saying that they never received any of their mother s clothes jewelry or money. The suit was filed against the appointed estate lawyer William A. Wright the recipient of Greenhow s personal effects turned over to him by Colonel Lamb who believed they would be turned over to her survivors but never were.

In 1888 the Ladies Memorial Association of Wilmington erected a large white Italian marble cross at Rose Greenhow s gravesite in Oakdale Cemetery. By then an endowment fund for care of the grave had been established by her daughter Rose Greenhow Duval the wife of Lieutenant William P. Duvall of the US Army.

A Bearer of Dispatches to the

From the Steamer Condor

While Attempting to Run the Blockade

Today Rose O Neale Greenhow s grave is maintained by the United Daughters of the Confederacy and it is one of the most visited sites in historic Oakdale Cemetery.