It was Memorial Day weekend 1967. The day dawned bright and clear. Temperatures would climb into the mid-80s. There was very little wind. As a group of young men in their mid-20s dressed incongruously in dark slacks white shirts and neck ties walked onto Wrightsville Beach none of the 100 or so spectators whod gathered on Banks Channel to watch the proceedings knew they were glimpsing the only team that would ever lay claim to being champions of the “Internationally Famous Whaleboat Races.” 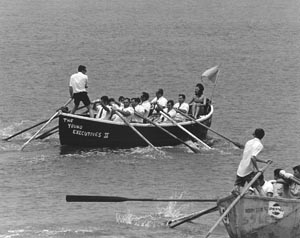 A.L. “Alley” Hart leader (and coxswain) of the three-time champion rowing team known as The Young Executives glances at an array of framed black-and-white photographs that decorate the walls of his insurance company office on Oleander Drive and remembers when. Like books in an old library the memories come down off the shelves. Metaphorical dust flies as he cracks the “spine” of those memories and as the “pages” turn details come into sharper focus: the smell of salt air and fish on that Saturday afternoon in Wrightsville Beach in the middle of that tumultuous decade they say you cant remember even if you were there.

But Alley Hart does remember and it lights up his face and voice.

Originally from Kinston North Carolina where he was a member of Granger High Schools state championship basketball team in 1956 Hart went on to Wake Forest University where in 1961 he became co-captain of the first Wake Forest basketball team to win the ACC Championship. Photos of that team which advanced to the Elite Eight in the NCAA Tournament that year share office wall space (albeit somewhat secondary wall space) with his whaleboat photos.

Hart came back to the beach from Winston-Salem in 1966 when the Security Life and Trust firm for whom he was working offered him a position in a branch office here. He eventually went out on his own to form the A.L. Hart Insurance Agency and its this office that is home to those memory-sparking photos of college basketball champions and whaleboat racers. 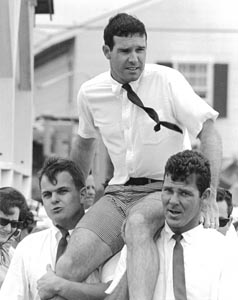 The transition from basketball to whale boats was Roy Rudds idea. Rudd owned The World Famous Spot a popular bar and restaurant on 22 North Lumina on Wrightsville Beach which over the years played host to a variety of well-known athletes in the summertime including New Hanover High School graduates Roman Gabriel who quarterbacked the Los Angeles Rams (1962-1972) and the Philadelphia Eagles (1973-1977) and Sonny Jurgenson who quarterbacked the Washington Redskins from 1964 to 1974. Rudd sponsored a city basketball team at the time. Still athletic and competitive Hart was a member of that team which was called The Spot.

“Roy approached me one day ” says Hart “and told me about these lifeboats they had lying around down there on the beach and said Alley we gotta do something to liven this beach up.”

“It all happened kind of fast ” Hart says. “It couldnt have been more than a couple of weeks between him talking to me about it and the races.”

Hart and Rudd headed down to the beach where sure enough there were three or four steel-hulled row boats that had seen duty as lifeboats aboard WWII Liberty (cargo) ship and somehow on a trip up the Brunswick River to a ship graveyard had been left behind on the sand at Wrightsville.

“I picked the best one ” said Hart. “The one that wasnt beat up as bad as the others.”

The boat was overhauled and painted red and Hart started recruiting a team that would become known at The Young Executives because according to rules of Harts devising the team had to consist of “young executives under the age of 35 who had insurance with (his) company.” 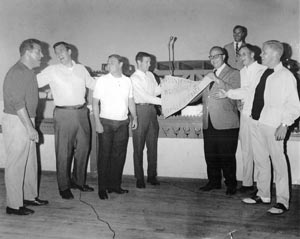 “He always did know how to make a dollar ” says Jackie Bullard a member of that nine-man team laughing at the memory. “Thats why we threw him in the water so many times every year cause he wouldnt give us our money back.”

When all was said and done The Young Executives of 1967 were a team that included Hart Bullard Sonny Simpson Jim Nelson John Smith Tommy Yates Luther Brown Howard Mayo and Robert Boone. In subsequent years the team would include former Wilmington District Attorney Jerry Spivey attorney Dan Brawley Dr. Howard Armistead (one-time head of the county Board of Commissioners) John Pierson (who is presently a broker sales and office manager for Bryant Real Estate on the beach) and Harold Parker.

No one seems to remember exactly how many boats were on hand for the preliminary trial race that was held the weekend before Memorial Day but when the trial was over four teams remained. Two of them The Young Executives and a team called The Long Strokers from the Wrightsville Bio-Medical Lab would square off in the Memorial Day weekend finals. Two teams from the Wilmington and New Hanover County Lions Club met in a consolation race held prior to the main event. The Wilmington Lions team took the consolation.

In addition to appointing himself to the role of coxswain the only member of the team who would not actually be rowing the boat (“I was the smart one ” Hart laughs) Hart decided that his team needed a “maiden” who would champion their cause and act as a standard-bearer for their upcoming efforts in the race. Qualifications for the role were similar to those of the team itself: She had to be under the age of 35 and also had to be insured by his company. In place of the “young executive” requirement Hart decided that “she had to be pretty.” Jackie Bullards girlfriend at the time Vickie Pittman fit the bill and as the boys headed out onto the beach that morning she was at their side temporarily.

Pittman now Vickie Atkins lives in Fuquay Varina and hadnt thought of the Internationally Famous Whale Boat Race in years but when the memory comes down off her personal “shelf ” it brings with it a spontaneous laugh that like Hart lights up her voice.

“That was quite an honor ” Atkins says of her selection as Miss Young Executive. “I remember that day.”

According to newspaper reports the following day The Young Executives finished the course from the Coast Guard dock around the two government buoys and back in 10 minutes and 15 seconds. It was also reported that the victorious team had to scramble to avoid hitting the dock pilings and that coxswain “Alley” Hart had been dumped into the water three times in that 10 minutes and 15 seconds.

There was some consideration given to throwing Commodore Roy Rudd into the water from the pier until it was learned that the owner of The World Famous Spot couldnt swim. It was all in good fun to be sure but as Jackie Bullard recalls victory in the First Annual Whaleboat Championship proved to be a little harder than theyd originally imagined. The boats were made of steel and if the event reports are accurate weighed more than a ton.

“When we finally got those boats off the sand and into the water we realized that its not just going to take somebody who can jump in and paddle a little bit. These boats had to be rowed and Ill tell you it was a leg-burnin arm-burnin wrenchin sweatin piece of work. There was nothing easy about it ” Bullard says. “And when we had to turn that boat around and come back against the current that finish line just kept getting further and further away. It seemed like if you were serious at it and we all were you had to really put an effort into what you were doing.”

They celebrated that evening with a dinner and awards ceremony at the Lumina one of the last events ever held at that pavilion which would close down completely within the next year or so and be torn down in 1973. The Internationally Famous Whaleboat Race would return in 1968 and once more in 1969 with The Young Executives as its repeat champion. By then the boat was painted with the names of its team members and notes of its previous victories.

“We won by a decent amount that second year too ” says Hart. “But by the third year those other boats were getting closer and closer and we werent as popular by then.”

“They threw rotten eggs at us ” he recalls with a laugh “and we quit after that third year.”

When the 1960s passed (one year after the last race) it was more than the whaleboat races that came to an end. It was according to Hart and Bullard the grand finale of a way of life on Wrightsville Beach that would never be seen again.

“We used to feel like the beach belonged to us ” says Bullard. “You just knew the whole crowd down there. Thered be places to go at night to meet with friends: The Spot; The Upper Deck which was part of the Lumina at the time; The Palm Room. Those were three of the hottest spots on the beach and of course over at the Middle of the Island restaurant on Saturday and Sunday mornings. Everybody would go on over there for breakfast. Its getting harder and harder to find a place to go now but back then it was just such a pleasure to just grab a blanket and go. Its just a little part of the things you miss looking back. You tell your sons and daughters about it.”

The memories make their way back onto the private shelves placed there with care and a smile. Its not say their owners that things are any better or worse than they were back then its that when they return to the here and now theyre left with the feeling that things were just different then things that need to be passed down and remembered from one generation to the next. Things that otherwise in the opinion of the men and women who were there you dont know that you missed.