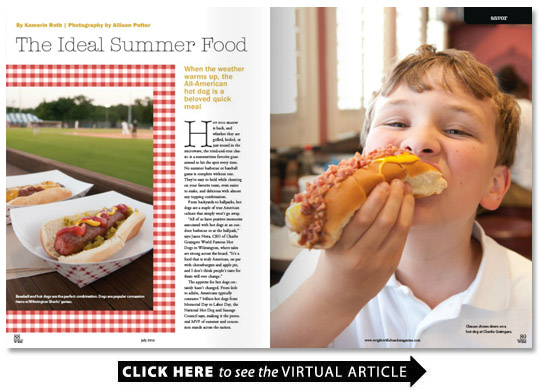 Hot dog season is back and whether they are grilled boiled or just tossed in the microwave the tried-and-true classic is a summertime favorite guaranteed to hit the spot every time. No summer barbecue or baseball game is complete without one. They’re easy to hold while cheering on your favorite team even easier to make and delicious with almost any topping combination.

From backyards to ballparks hot dogs are a staple of true American culture that simply won’t go away.

“All of us have positive memories associated with hot dogs at an outdoor barbecue or at the ballpark ” says Jason Nista CEO of Charlie Graingers World Famous Hot Dogs in Wilmington where sales are strong across the board. “It’s a food that is truly American on par with cheeseburgers and apple pie and I don’t think people’s taste for them will ever change.”

The appetite for hot dogs certainly hasn’t changed. From kids to adults Americans typically consume 7 billion hot dogs from Memorial Day to Labor Day the National Hot Dog and Sausage Council says making it the perennial MVP of summer and concession stands across the nation.

Although considered an All-American food hot dog historians speculate that today’s popular sausage was most likely born in the German-speaking world where in fact two towns hold a long-standing feud over the right to be called the birthplace of the modern-day hot dog.

The people of Frankfurt claim to have created the long thin wurst known as a frankfurter in 1487 five years before Christopher Columbus set sail for the Americas. They celebrated the frankfurter’s 500th birthday back in 1987 holding strong to the belief they created the popular sausage.

But Vienna (pronounced Wien in German) residents tell a different story. They claim the “wienerwurst ” another name for the same sausage was born in their city and offer up their name as heritage.

Regardless of where it originated historians generally agree that immigrants were the first to introduce Americans to the creation in the 1860s. Germans sold their sausages accompanied with milk rolls and sauerkraut from pushcarts in New York City. It didn’t take long for the sausages commonly referred to then as “red hots ” to catch on.

The hot dog’s rise to fame as one of America’s favorite foods is closely linked to its connection with the national pastime. Legend has it that Chris Von Der Ahe a German immigrant and owner of the St. Louis Brown Stockings brought hot dogs and baseball together for the first time around 1893. Baseball fans devoured the German creation as fast as they could get their hands on them.

Inexpensive and easy to hold during the game hot dogs became the perfect match for the sport and have since become the quintessential fare at baseball games across the nation. Today the top 10 hot dog- consuming cities in America are all home to a Major League Baseball team.

“Hot dogs and baseball have been a tradition throughout history ” says Courtney Wright assistant general manager of the Wilmington Sharks collegiate summer baseball team. “These two have been together for a while. I mean they sing songs about them and where do you think the term ‘ballpark franks’ came from? Before the game and in between innings everyone heads for a hot dog. It’s just tradition.”

“We try to keep it traditional for our fans and really celebrate the game ” Wright says. “Hot dogs are a big part of that. They’re definitely our most popular concession item. And we actually sell a lot more half-pound dogs than you would think. Some minor-league teams really go crazy with their toppings but we’ve kept it the way it’s always been.”

Hot dog sales remain strong the National Hot Dog and Sausage Council says with more than $2.5 billion in retail sales last year. But with an increased emphasis on healthy living in America hot dog makers have been forced to reformulate their recipes to reduce levels of fat and sodium. Now nitrate-free all beef high-protein and even organic gluten-free and vegetarian options can make hot dogs a relatively nutritious choice.

“People are looking for a fast fresh value ” says Nista who is preparing for a massive Charlie Graingers franchise expansion. The restaurant which opened its first store in Wilmington a few years ago will soon grow to more than 50 locations across the East Coast. “Honestly we don’t think there are any trends in what we do. We’re just serving classic American food the way it’s always been served in the South.”

The simplicity and popularity of the good ol’ hot dog also allowed Wrightsville Beach staple the Trolly Stop to grow. Rick Coombs the third owner of the restaurant that was born in 1976 as Station 1 because it was located on the first stop on the old beach car line in Wrightsville Beach added locations in Wilmington Southport Chapel Hill and Boone.

What goes on the hot dog has always been just as important as the dog itself. Since the time when German immigrants first sold them with sauerkraut people from every region have taken the hot dog and put their own twist on it.

It started out as a way to stay ahead of the competition. Vendors from different cities would create new and inventive topping combinations to make their dogs stand out and attract customers. In Detroit they dressed their sausages with a chili-like Coney Sauce and in Chicago dogs were basically crafted with a salad on top.

These days there is no limit to what a topping can be or how many can be crammed into the bun alongside the sausage.

At Charlie Graingers they top their Trail’s End dog with the usual mustard chili and coleslaw but then they build it up even higher with their signature beef brisket and barbecue sauce. They finish it off with a few pickles and an okra spear. The result is messy with brisket and chili spilling from the bun but undeniably delicious.

Lanes Ferry Dock & Grill in Rocky Point offers the River Dog which comes with onions chili and slaw and the Famous (or infamous) Mac Attack which is wrapped in bacon and dropped into the fryer.

“I put it in the deep fryer and get the bacon nice and crispy ” says owner and chief cook Larry “Big Mac” McManus.

Lanes Ferry tends to serve a few more of the River Dogs.

“A lot of people see the bacon on the Mac Attack and think it’s a heart attack on a bun ” McManus says with a laugh.

At the Trolly Stop they serve up their popular Wrightsville Beach dog a little simpler filling the buns with deli mustard chopped onions tomatoes and a signature chili-based sauce that’s a closely held secret.

“Our secret recipe chili is tangy and has some horseradish in it ” Coombs says. “I’m afraid that’s all I can tell you.”

At Sam’s Hot Dog Stand in Wilmington they dial up the heat with their Atomic Dog which combines a spicy version of their secret chili with mustard ketchup onions cheese and cracked pepper. They top it all off with a row of jalape�os. It’s a fiery take on the classic.

“Hot dogs are all about personal taste ” Hissam says. “Our most popular ones are probably the Straight-Up and All-The-Way dogs which are topped with mustard fresh cut onions coleslaw and chili. We let our customers build their own dogs but once they try Sam’s secret chili they usually stick with it on future orders.”