The Home Front: A Little Piece of History on North Carolina Soil 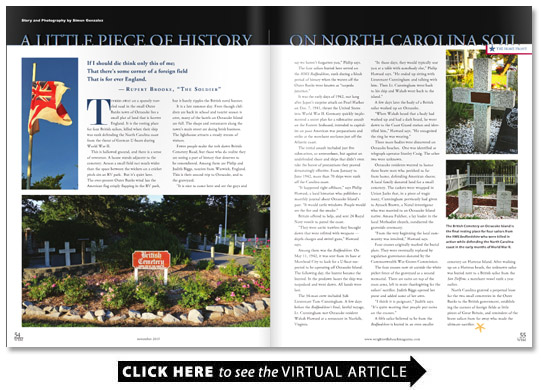 If I should die think only this of me;

That there’s some corner of a foreign field

That is for ever England.

Tucked away on a sparsely traveled road in the small Outer Banks town of Ocracoke lies a small plot of land that is forever England. It is the resting place for four British sailors killed when their ship was sunk defending the North Carolina coast from the threat of German U-boats during World War II.

This is hallowed ground and there is a sense of reverence. A house stands adjacent to the cemetery. Across a small field not much wider than the space between the wickets on a cricket pitch sits an RV park. But it’s quiet here. The ever-present Outer Banks wind has the American flag crisply flapping in the RV park but it barely ripples the British naval banner.

It is a late summer day. Even though children are back in school and tourist season is over many of the hotels on Ocracoke Island are full. The shops and restaurants along the town’s main street are doing brisk business. The lighthouse attracts a steady stream of visitors.

Fewer people make the trek down British Cemetery Road but those who do realize they are seeing a part of history that deserves to be remembered. Among them are Philip and Judith Biggs tourists from Warwick England. This is their second trip to Ocracoke and to the graveyard.

“It is nice to come here and see the guys and say we haven’t forgotten you ” Philip says.

The four sailors buried here served on the HMS Bedfordshire sunk during a bleak period of history when the waters off the Outer Banks were known as “torpedo junction.”

It was the early days of 1942 not long after Japan’s surprise attack on Pearl Harbor on Dec. 7 1941 thrust the United States into World War II. Germany quickly implemented a secret plan for a submarine assault on the Eastern Seaboard intended to capitalize on poor American war preparations and strike at the merchant sea-lanes just off the Atlantic coast.

The initial assault included just five submarines or unterseeboots but against an undefended shore and ships that didn’t even take the barest of precautions they proved devastatingly effective. From January to June 1942 more than 70 ships were sunk off the Carolina coast.

“It happened right offshore ” says Philip Howard a local historian who publishes a monthly journal about Ocracoke Island’s past. “It would rattle windows. People would see the fire and the smoke.”

Britain offered to help and sent 24 Royal Navy vessels to patrol the coast.

“They were arctic trawlers they brought down that were refitted with weapons — depth charges and swivel guns ” Howard says.

Among them was the Bedfordshire. On May 11 1942 it was sent from its base at Morehead City to look for a U-boat suspected to be operating off Ocracoke Island. The following day the hunter became the hunted. In the predawn hours the ship was torpedoed and went down. All hands were lost.

“In those days they would typically seat you at a table with somebody else ” Philip Howard says. “He ended up sitting with Lieutenant Cunningham and talking with him. Then Lt. Cunningham went back to his ship and Wahab went back to the island.”

A few days later the body of a British sailor washed up on Ocracoke.

“When Wahab heard that a body had washed up and had a dark beard he went down to the Coast Guard station and identified him ” Howard says. “He recognized the ring he was wearing.”

Three more bodies were discovered on Ocracoke beaches. One was identified as telegraph operator Stanley Craig. The other two were unknown.

Ocracoke residents wanted to honor these brave men who perished so far from home defending American shores. A local family donated land for a small cemetery. The caskets were wrapped in Union Jacks that in a piece of tragic irony Cunningham previously had given to Aycock Brown a Naval investigator who was married to an Ocracoke Island native. Amasa Fulcher a lay leader in the local Methodist church conducted the graveside ceremony.

“From the very beginning the local community was involved ” Howard says.

The four crosses now sit outside the white picket fence of the graveyard as a second memorial. There are coins on top of the cross arms left in mute thanksgiving for the sailors’ sacrifice. Judith Biggs opened her purse and added some of her own.

“I think it is poignant ” Judith says. “It’s quite moving that people put coins on the crosses.”

A fifth sailor believed to be from the Bedfordshire is buried in an even smaller cemetery on Hatteras Island. After washing up on a Hatteras beach the unknown sailor was buried next to a British sailor from the San Delfino a merchant vessel sunk a year earlier.

North Carolina granted a perpetual lease for the two small cemeteries in the Outer Banks to the British government establishing the corners of foreign fields as little pieces of Great Britain and reminders of the brave sailors from far away who made the ultimate sacrifice.