The Home Front: A Dive Toward History 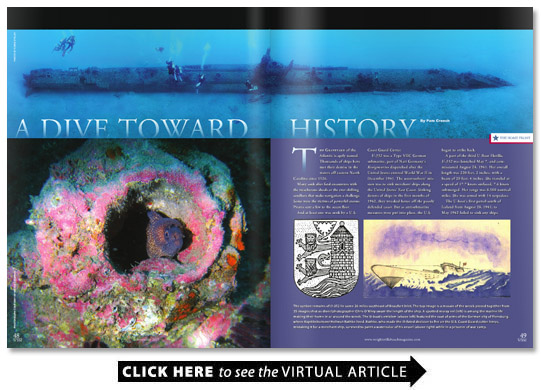 The Graveyard of the Atlantic is aptly named. Thousands of ships have met their demise in the waters off eastern North Carolina since 1526.

Many sank after fatal encounters with the treacherous shoals or the ever-shifting sandbars that make navigation a challenge. Some were the victims of powerful storms. Pirates sent a few to the ocean floor.

And at least one was sunk by a U.S. Coast Guard Cutter.

U-352 was a Type VIIC German submarine part of Nazi Germany’s Kreigsmarine dispatched after the United States entered World War II in December 1941. The unterseeboots’ mission was to sink merchant ships along the United States’ East Coast. Sinking dozens of ships in the first months of 1942 they wreaked havoc off the poorly defended coast. But as antisubmarine measures were put into place the U.S. began to strike back.

The sub’s home port was Saint-Nazaire France. With a crew of 48 on board on her second patrol after a four-week crossing U-352 arrived on the U.S. coast on May 2 determined to succeed. Coast Guard records show on May 7 U-352 was spotted from the air and bombed without being injured. But the hunt for the sub was on.

Two days later U-352 spotted a mast through the periscope and fired two torpedoes. Kapit?nleutnant Hellmut Rathke believed he was targeting a merchant ship. Instead the sub had fired on and missed the 165-foot U.S. Coast Guard Cutter Icarus.

Under the command of Lieutenant Maurice D. Jester Icarus dropped patterns of depth charges on the submerged vessel. The critically injured sub surfaced 45 minutes after the battle began and the crew abandoned the U-boat as it sank at a location the Coast Guard lists as 34.21N x 76.35W.

A replica of the wreck is on display at the North Carolina Aquarium at Pine Knoll Shores.

The sub a majority of which lies below 115 feet of water 26 miles southeast of Beaufort Inlet is a popular destination for scuba divers from all over the world.

“It’s one of the more popular wrecks ” says Leroy Craytor a charter boat captain at Discovery Diving in Beaufort. “People come from all over the world to see it every year. We get quite a few Germans who come here to see it.”

Charter boat Captain Terry Leonard one of Craytor’s colleagues went diving inside the wreck for the first time in 1979 before the Sunken Military Craft Act passed in 2004 made it illegal to do so.

“It’s pretty tight ” he says. “As soon as you kick your fins it silts up. It was not for the inexperienced.”

When an eddy of clear warm water swings off the Gulf Stream toward the wreck divers can see the vessel from the surface. Other days divers can only see 30 feet in each direction.

Despite the hurricanes that frequent the Southeastern Coast the U-352 is mostly intact. The sub lies on her starboard (right) side at a 45-degree angle. A large hole in the side of the ship is from one of the Icarus’ depth charges. Thousands of silvery bait fish swim above the wreck darting around the gun mount on top of the vessel.

Fifteen of the U-boat’s sailors are listed by the Coast Guard as killed in action. After the sinking the Icarus picked up the surviving members of the crew and transported them to the Charleston Navy Yard where the Coast Guard had the opportunity to photograph the first German prisoners of war taken by the United States after the declaration of war with Germany.

The U-352‘s location remained unknown until 1975 when dive charter boat captain George Purifoy and friends Rod Gross and Dale McClough located the wreck. Purifoy had spent many days unsuccessfully searching by running a boat through grid patterns in the choppy spring seas. Then on a morning in April they finally found the wreck while using new Loran-C navigation aids.

For the next nine months the divers kept the location secret so they could recover artifacts from the sunken vessel.

In 1985 Purifoy and his son Robert hosted a reunion for the surviving crewmembers in Morehead City. During the reunion radio operator Kurt Kruger described the location of his personal locker. There was a coat camera and pistol there and he asked Purifoy to retrieve them on a future dive. The next time he visited the site Purifoy found the items in almost perfect condition.

Kruger asked Purifoy — who died in 2008 during a dive at the Queen Anne’s Revenge shipwreck site — to keep them on permanent display at his dive shop Olympus Dive Center in Morehead City. They are now in a chest-high case filled with artifacts Purifoy collected from the U-352 before it became illegal to do so. The case also holds a hair comb a porcelain plate fragment engraved with a black swastika a tube of toothpaste and other small artifacts.

“Everything was coated in diesel. They had to slowly soak it to get the diesel off ” says Dottie Benjamin the dive shop’s charter manager.

Perhaps the most impressive artifact in the case is a photograph of Adolph Hitler that somehow survived four decades under the ocean. Mounted on the shop’s back deck overlooking Harbor Channel is a 20mm machine gun retrieved from the wreck.

Divers are no longer allowed to take artifacts from the U-352 after the passage of the Sunken Military Craft Act. The law protects all military shipwrecks and the remains of military personnel located within 24 nautical miles (27.6 miles) of the U.S. coast. The law also protects U.S. craft in foreign waters.

Leonard the charter boat captain says the law reflects a shift in mentality among the diving community.

“When I first started diving in the ’70s everybody got on the boat with crow bars and hammers to pull artifacts from wrecks ” he says. “Now they just bring cameras. Divers these days want to kill only time take only pictures and leave only bubbles.”

The wreck lies about a two-hour boat ride from the mainland. There among the purple sea fans yellow striped grunts and spotted moray eels that now inhabit the vessel divers witness how nature has turned something tragic into something beautiful.