The Havoc of Hazel 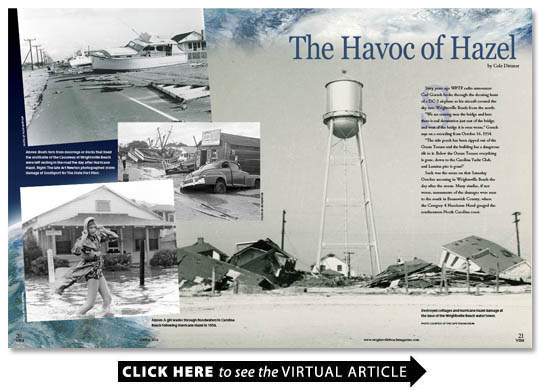 Sixty years ago WPTF radio announcer Carl Goerch broke through the droning hum of a DC-3 airplane as his aircraft crossed the sky into Wrightsville Beach from the north.

Such was the scene on that Saturday October morning in Wrightsville Beach the day after the storm. Many similar if not worse assessments of the damages were seen to the south in Brunswick County where the Category 4 Hurricane Hazel gouged the southeastern North Carolina coast.

Just more than 24 hours beforehand when marine radios revealed a hurricane was heading toward the beach the evening of October 14 1954 Cecil and Silvey Robinson stayed up all night listening.

At dawn the next day they loaded up the children and Silvey drove inland. Her husband and her brother stayed behind and weathered the storm in their boat the Dixie Rebel.

That same day classmates Marie Ashworth and Millie Vestal now Millie Knowles woke up to what they believed to be an ordinary Friday morning. Ashworth s father Robert  Bob  Ashworth was the North Carolina Department of Transportation district engineer who had moved with his wife Eugenia little Marie her two older brothers Gene and Bobby and elder sister Lib to the then unnamed Airlie Road in the 1930s to build Waynick Boulevard Knowles  father Marion Calhoun  M.C.  Vestal was the volunteer Wrightsville Beach Fire Chief and lived at the corner of Lindy Lane and South Channel Drive on Harbor Island with his wife Mildred and only child Millie.

When both Ashworth and Knowles awoke that morning their fathers were gone.

It was just a nice fall early morning when we woke up   Ashworth says.  Our telephone rang about 4:30 am and it was my father being called into work. Then about two hours later he called my mother and said Get out now and do not try to take anything with you.

It was two days before Ashworth s fifteenth birthday and early that morning she and her mother heeded her father s warnings to leave the house immediately. With none of her siblings living at home at the time Ashworth says she and her mother were out of the driveway in the family s navy blue Pontiac by 7 am.

We got in the car turned right going toward what we called Dead Man s Curve on Airlie Road and the water was already pouring over the road there so my mother was calm enough and had sense enough to drive through it very slowly and we got to the other side without the motor stalling out   she says.

Ashworth and her mother would make it safely to her great aunt s house in Winter Park but the same could not be said for the Vestal family until much later in the day.

As the fire chief Knowles said it was her father s duty to travel door-to-door warning residents about the coming storm.

Back then the news was nothing like it is today and he was knocking on doors telling people to get off the beach because that is what he did every hurricane   Knowles said.  Mother and I were at the house waiting until daddy came back to get us and he finally came and said We have got to get out of here look outside!

What the family would see outside around noon that day was water from Banks Channel pouring into their front yard and into the first-floor apartment of their two-story home.

After packing a few suitcases and setting out to check on her mother s friend LaRue McKenna the Vestals encountered an obstacle.

We got in the car which was an old green Packard went around the traffic circle and water started coming in the doors and it flooded the car completely   Knowles said.  In that storm with a couple suitcases and carrying our dog Poochy we started walking. The current was bad the wind was blowing and we carried everything all the way up to the Causeway with the water up to my waist.

There parked on the Causeway like a lifeboat in a storm was an old truck ready to take any remaining residents off of the island.

I don t know who was in it but I had never been so glad to see a truck in my life   Knowles says.  It gives me chills just thinking about it to this day. I don t know what we would have done if it was not there.

To her knowledge Knowles says they were the last people to leave the island and would not reach a family friend s house on Parkway Drive next to Hugh McRae Park until dark.

Waiting the storm out during the day proved to be a frightening and long affair for Ashworth and her family.

My great aunt had a lot of sapling pine trees around her house and we would look out the window during the storm and the trees would be bent all the way to the ground   Ashworth says.  It was a horrible sound with the wind blowing so hard the whole time and we had no idea where daddy was or what he was doing.

After the tide came in and the piers came up with the boats still attached Cecil Robinson and his brother-in-law dodged drifting vessels before the Dixie Rebel crashed into submerged pilings. Cecil Robinson secured the boat to a light pole on Waynick Boulevard.

Having lived through the conditions of the storm firsthand Knowles says she did not care that she had to sleep on the floor with a blanket that night.

As the next morning dawned the families awoke and made their way back down to the island to the same scene described by Carl Goerch.

Parking near the drawbridge Ashworth and her mother passed boat after boat listing on Airlie Road on the walk to their house which was located across the street from where Dockside Restaurant is now. At the time the Dockside building was the Wrightsville Gulf Terminal service station.

It had two great big plate glass windows in the front so when Hazel hit it washed right through the terminal and broke those plate glass windows because everything in the terminal wound up in our yard   she says.  Our house was built in 1825 and it didn t have one bit of damage even the roof was fine. The back yard was like walking through snow except it was all twigs and reeds nothing big just thousands of little pieces about 8 inches deep.

Along with finding their home intact Ashworth and her mother were also reunited with her father and her sister Lib who had just returned from a honeymoon in the mountains with her husband Tancil Horne.

My father s first reaction was Oh my God   and then his second reaction was I am going to be working 24 hours a day for a while I think    Ashworth says.  When my sister saw all that destruction she burst into tears and everybody grabbed everybody because we had not been able to talk to anyone and it was our first realization that we were all OK.

The Vestal family had a longer walk from the drawbridge to find their home relatively unscathed. However Knowles says she still remembers how sad she was to find her beloved wooden inboard Chris Craft sunk in the marsh across the Causeway.

Everything I grew up with was gone   she says.  They used to have public piers on Harbor Island and they were all gone. That is where I learned to dive where we crabbed and we learned to do everything off those piers.

While Hazel took it also gave back to Knowles in some small measure because a red and white slalom water ski had found its way into the family s front yard which she used for years afterward.

When Silvey Robinson traveled to the beach after the hurricane passed to find her husband she saw dislodged houses and roads buried by sand — and finally near where Carolina Yacht Club now sits her husband.

I saw my husband walking toward me. I dropped my children s hands and ran toward him. By that time I didn t know what had happened to him   she says.

Assessing the damage the next day the couple saw something extraordinary.

As we walked south from Station One toward Lumina there was a two-story house that had been up on pilings and those pilings had been washed out so the house was almost on its knees.  And in the breeze were two strands of sand dollars not one of them broken   she says.

The death toll for Hurricane Hazel totaled 600 on the storm s path up the Eastern Seaboard into Canada with 19 deaths in North Carolina. Hazel s landfall coinciding with an incoming lunar high tide caused the estimated damage to skyrocket to $1.1 billion for the state and $2.8 billion total.

In spite of the destruction life continued in Wrightsville Beach and southeastern North Carolina with the help of countless public servants like NCDOT district engineer Bob Ashworth and Fire Chief M.C. Vestal who worked for days to clear the carnage and build anew.