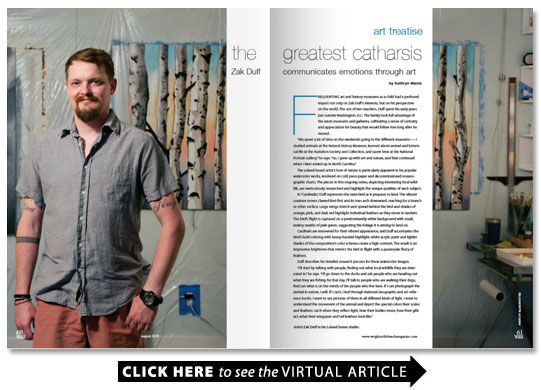 Frequenting art and history museums as a child had a profound impact not only on Zak Duff’s interests but on his perspective on the world. The son of two teachers Duff spent his early years just outside Washington D.C. The family took full advantage of the area’s museums and galleries cultivating a sense of curiosity and appreciation for beauty that would follow him long after he moved.

“We spent a lot of time on the weekends going to the different museums — I studied animals at the Natural History Museum learned about animal and botanical life at the Audubon Society and Collection and spent time at the National Portrait Gallery ” he says. “So I grew up with art and nature and that continued when I later ended up in North Carolina.”

The Leland-based artist’s love of nature is particularly apparent in his popular watercolor works rendered on cold press paper and decommissioned oceanographic charts. The pieces in this ongoing series depicting interesting local wildlife are meticulously researched and highlight the unique qualities of each subject.

In “Cardinalis ” Duff represents the state bird as it prepares to land. The vibrant creature moves clawed-feet-first and its toes arch downward reaching for a branch or other surface. Large wings stretch and spread behind the bird and shades of orange pink and dark red highlight individual feathers as they move in tandem. The bird’s flight is captured on a predominantly white background with small watery swaths of pale green suggesting the foliage it is aiming to land on.

Cardinals are renowned for their vibrant appearance and Duff accentuates the bird’s bold coloring with heavy-handed highlight; white acrylic paint and lighter shades of the composition’s color scheme create a high contrast. The result is an impressive brightness that mimics the bird in flight with a passionate flurry of feathers.

Duff describes his detailed research process for these watercolor images.

“I’ll start by talking with people finding out what local wildlife they are interested in ” he says. “I’ll go down to the docks and ask people who are heading out what they are fishing for that day I’ll talk to people who are walking their dogs find out what is on the minds of the people who live here. If I can photograph the animal in nature I will. If I can’t I leaf through National Geographic and art reference books. I want to see pictures of them in all different kinds of light. I want to understand the movement of the animal and depict the special colors their scales and feathers catch when they reflect light how their bodies move how their gills act what their wingspan and tail feathers look like.”

“I don’t want to paint a bunch of boring silver fish ” he adds with a chuckle.

These pieces are often done on commission and Duff enjoys the challenge of personalizing a wildlife portrait for his customers.

For a commission depicting a king mackerel Duff composed the image on a decommissioned chart of Harper’s Island where the buyer had recently been married. In other examples like his portraits of a flier sunfish and a redear sunfish Duff selects charts from areas where the animal can be found.

The process begins with a reference image and a simple pencil sketch. Duff often goes over the line drawing with illustration pens. Then he lays down a color wash before developing the detail of the central image.

Duff typically works for 4-6 hours on each piece. After allowing some time for the colors to settle into the page he revisits the piece to add highlights and reinforce the primary drawing.

Duff took a winding road before settling in the Wilmington area. He enrolled in a video editing program at Elon University transferred to Cape Fear Community College and then University of North Carolina Wilmington for his BFA did curatorial work and gallery management and ran a local tattoo shop.

Along the way he met and married his wife Kim. They started their family as Duff was finishing an MFA program.

He credits his life partner and his parents with a lot of his success.

“It’s not difficult to be brave when you have an amazing wife and incredibly supportive parents ” he says. “Not only have they been supportive but my parents really planted the seed by exposing me to art early on. And my wife has truly infinite patience. She is a wonderful woman and she is so integral to my success.”

Another primary component of Duff’s practice is creative and abstracted work with oil. While a watercolor might be finished in just a few days he spends months on each of his oil portraits.

Duff has experimented with portraiture and high-concept painting since his college days. This more conceptual arm of his work is often influenced by sociological and activist concerns. Duff has a naturally observant and curious mind possessing a voracious desire to know more about the world including social and cultural issues.

“I’ve always been interested in activism and was involved in student activism at Elon ” he says. “It led me to a lot of reading about global and national politics. I was able to see America’s impact on the greater world stage and our remaining influence on places where we had once been. I was also really interested in different religions. So I was trying to process all of these different worldviews and understand the world around me. And the way to do that — and bring peace to my own mind — was through art.”

In college Duff created work that interrogated the negativity and sensationalism of American news media. In graduate school this impulse turned into the “Traits and Temperaments” series — portraits exploring how social media encourages users to present disingenuous versions of themselves.

He plays on these expectations and affectations in paintings that represent individuals as hyper-stereotyped versions of their true selves. “The Chef ” for example is depicted with masculine bravado staring directly and challengingly at the viewer. He has a chef’s knife in one hand and flaming cast iron pan in the other. Mimicking our tendency to show only the best and most flattering versions of ourselves on social media the Chef shows us his most impressive imposing self.

In his newest portrait series fondly referred to as “the sky ladies ” Duff is exploring the meeting place between his two favored painting modes. In these pieces he experiments with double exposure a photo technique that superimposes multiple exposures into a single image. This was a fairly common accident in the early days of photography when exposure times were much longer and even gave rise to the “spirit photography” of the 19th century.

In these paintings figures emerge from and coexist with bright marshy sunsets and matte blue open skies. Duff incorporates this technique by using a projector to lay portraits in profile on top of nature photographs. The effect of the whimsical mashup is a mysterious meditative scene reminiscent of a dreamscape. It invites the viewer to consider the connection between natural and human elements and encourages a psychological reading of the person depicted.

Duff has just started work on this series and it promises to be a fascinating and beautiful combination of his artistic strengths.

In many ways art is an intellectual exercise for Duff who pushes himself to try new techniques and think seriously about what he is making. But it is also a crucial mechanism to express emotions experiences and ideas that are beyond words and one of his favorite reactions to his paintings is “I don’t know why I love it but I just do.”

“That feeling really resonates with me ” he says. “For me visual expression is the greatest form of emotional expression; it’s the greatest catharsis and I think that goes all the way back to when I was a kid. My language development was a little bit slow and drawing was always a refuge for me. There’s a lot more in my head than what I can get out in words. I don’t always understand why I’m so passionate about what I’m seeing when I look at art but it connects to something deep within me. When I hear a client say ‘I can’t express why I like it I just do ‘ that means so much more to me. It makes me feel like we’re connected on that next level and that is so rewarding.”

Duff is both an exceptionally creative and emotional painter and a thoughtful conscientious thinker. His paintings reveal a meticulous and thorough hand and exude genuine awe and love of the world around us.