In January 1934 the cold of the off-season Wrightsville Beach was quiet most of its private cottages and boarding houses empty. The island was waiting for summer when visitors would come in droves to enjoy the beach dance at Lumina and shop at Newells. On Sunday January 28 however the peaceful sleepy winter was shattered by The Great Fire

At about 12:30 in the afternoon smoke was seen billowing out of the Kitty Cottage the well-known boarding house in which the fire began. Its rumored that a cigarette lit during a card game started the fire but others believe it was caused by an electric iron. Either way the Wilmington Morning Star reported that the fires effects were immediate leveling 103 buildings including the Oceanic Hotel in less than three hours.

In another article that day a reporter describes the scene from above after taking an airplane ride over the island:“The dread god of fire tramped over the northern extension of Wrightsville Beach this afternoon and lighted the cottages one by one like so many tapers. When at last his saga of destruction done he folded up his wings and soared away hundreds of cottages lay in smoldering ruins; at least a third of the popular resort was ashy waste and scores of year-round residents were destitute.”

As the fire raged those on the beach began forming bucket brigades and pushing heavy carts with fire hoses. Wrightsville Beach had a volunteer fire department established around 1915 with buckets and hoses as their only resources. Former Wrightsville Beach Fire Chief Everett Ward who served from 1976 to 2003 says that back in the 1930s there were some water pipes used for hose stations but Wrightsville Beach didnt have hydrants a fire truck or large fire mains. Also there wasnt any freeze protection so in the winter the pipes they did have might have been frozen.

The Wilmington Fire Department was called in but since the drawbridge for cars hadnt been built yet firefighters spent valuable time loading their truck onto trolley flat cars. Then once the fire truck finally made it to the beach it got stuck in the sand since there were no paved roads rendering it useless.

With strong winds and inadequate protection the fire easily spread from one building to the next. Wrightsville Beach resident Bill Creasy remembers watching this chain reaction from Harbor Island. “When the Oceanic Hotel caught on fire it was such an immense fire that the burning embers from the heat rose up and the wind was blowing out of the southwest and it blew those burning embers down and dropped them on various houses and by then the whole beach was ablaze.” 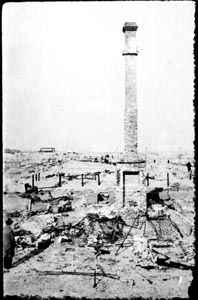 Creasy was six years old when he watched his familys summer home burn down. Like Creasy many people saw the scene unfold from Harbor Island because the trolley was being used for the Wilmington fire truck and the walkway had been blocked off. Creasy still vividly recalls what he witnessed more than 75 years ago. “It burned an image in my mind because I can remember the smoke and the flames. The flames were very high because it was so hot probably fifty feet.” Creasy says that even from his vantage point “You could feel the heat. When the wind would blow it would blow a breath of hot air at you.”

Luther “Tommy” Rogers Jr. was nine years old at the time and remembers actually crossing onto Wrightsville Beach with his father Luther Rogers Sr. who had built the Kitty Cottage. “My dad took me over there. He built a large percentage of the houses on Wrightsville Beach so he was trying to look out for his customers and save their houses.”

Cecil Robinson a year-round resident was also on the beach that day. His wife Silvey Robinson says he was a part of the bucket brigade that saved a handful of cottages by climbing ladders to spray hoses and pour buckets of water onto the wood-shingled roofs blocking the assault of burning embers. Silvey Robinson was in Brunswick County at the time and she actually saw the smoke from there. “It was a big black cloud of smoke in the air ” she explains “and I remember my dad saying Thats a bad fire wherever thats happening.”

The Edgewater Inn owned by Bill Creasys grandmother was one of the buildings Cecil Robinson helped to save. After the fire 10 families were left homeless and many stayed at the Edgewater Inn until they could rebuild. Along with the hotel another four homes were saved as well. 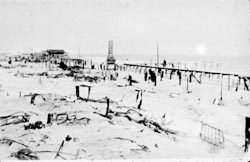 Wrightsville Beach resident Betty Bordeaux says that just before the Ewing-Bordeaux cottage would have been engulfed in flames the fires path was cut off by a large sand dune until the wind shifted away from the home. Hearing this story the Wilmington Morning Star took a lighter tone: “If an historical commission is appointed in years to come to erect a monument to yesterdays Wrightsville Beach disaster there is a sand dune on the northern extension sound side that deserves a little stone.”

The tone was more serious in the Bordeaux home however. Bordeaux was born after the fire but she remembers her mother describing the dread she felt watching the blaze move closer and closer. “People were trying to save thingsthey threw out the telephone of all things and a big marble sideboard ” Bordeaux says. “But they just panicked I guess and threw them right out the window.”

Other residents had a similar idea but unfortunately most items either burned anyway or were taken by looters who came by boat.

In less than three hours Wrightsville Beach was forever changed. The fire destroyed most of the north end sparing the south. “It was just a bunch of ashes ” says Creasy of the aftermath. “There was nothing left. Chimneys were still standing and old iron beds. There were iron beds everywhere. The mattresses were gone just the bed frames.”

Even the wildlife didnt escape. “The fire was so hot ” Creasy remembers “that over on the ocean side little sand fiddlers little crabs were all over the beach dead from being cooked by the fire.”

Jim Wallace Sr. was 18 years old and in college at Wake Forest when his family called to tell him the news. When he returned home the next weekend Wallace remembers kicking around the ashes looking for anything. His family lost everything including family photos. The only item he found was his grandfathers metal moustache cup.

“Some houses to the east did not burn ” he explains “but our house couldnt have been saved. Nobody back then could have stopped that fire.”

The beach soon recovered with the help of the Federal Civil Works Administration which rebuilt the boardwalks. The trolley line was repaired by the Tidewater Power Company since power poles and trolley wires had been damaged. By 1935 tourists could drive their cars to the beach for the first time on the brand new two-lane drawbridge.

At the same time private contractors like Rogers Sr. worked to rebuild some of the cottages that had been lost. This time around houses were made with asphalt shingles (instead of wood) and fire-proof asbestos siding. Finally the Carolina Yacht Club saw a surge in membership from families who chose to join the club instead of rebuilding their properties.

Wrightsville Beach continued growing until the devastation of The Great Fire was just a memory. But Wallace Sr. still thinks about his familys home and wonders what could have been.

“I do sometimes think about what life would be like if that house was still there if our house had survived ” he says. “Some houses were saved and others werent based on how the wind was blowing.”

Wallace remembers a simpler time before the drawbridge opened up the beach. “Back then it was just the seagulls sand pipers running along the beach our dogs running free and there were a lot of sand dunes still. We were all barefoot back then ” he says recalling life on Wrightsville in the 1930s. “It was kind of wonderful with the slow pace but there was a lot going on too with the Lumina and Oceanic going full blast.”

Wrightsville Beach has always been vulnerable to fires because of high winds wood-frame homes in close proximity and an initial lack of a fire department with necessary equipment. The communitys volunteer fire brigade formed around 1915 but didnt have a modern fire engine until the mid-1940s. Eventually more trucks were added to the fleet and in 1984 Chief Everett Ward became the first paid firefighter. Heres a look at the fires that have plagued Wrightsville Beach over the years:

There was no volunteer fire department at this time so this blaze easily destroyed the Island Beach Hotel which had opened its doors in 1888 along with the propertys ballroom and pavilion. The hotel had 160 rooms a grand ballroom and a 4 300-square-foot pavilion for concerts and dancing.

The Seashore Hotel suffered its first major fire in 1919 when the building which at the time boasted 110 rooms and entertainment like billiards and bowling alleys was destroyed. A lack of wind and a later thunderstorm helped contain this blaze.

In the 1920s Shell Island was the premier resort for African Americans with hotels private cottages bath halls concessions and a dance pavilion. Visitors would travel from 50 cities in 10 different states because the resort was so unusual at the time. In June of 1926 a fire started in a dining room and within a half hour left the pavilion in ruins. Only five buildings escaped the blaze because of strong southerly winds and a lack of resources. Despite promoting goodwill between whites and blacks in the South the resort was never rebuilt.

After the Seashore Hotel survived the Great Fire of 1934 the owners of the Kitty Cottage leased the building and renamed it the Ocean Terrace Hotel. After suffering damage from Hurricane Hazel in 1954 the hotel was ravaged by fire in 1955. By 1964 it was replaced by the Blockade Runner.