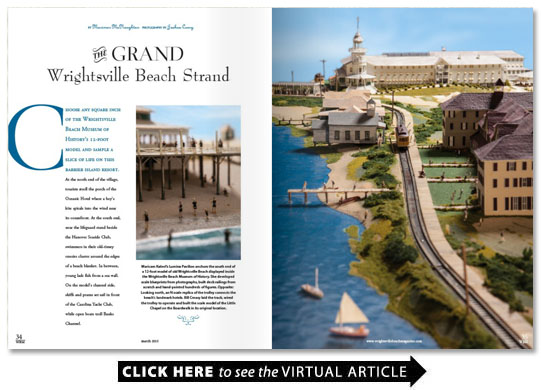 Choose any square inch of the Wrightsville Beach Museum of History’s 12-foot model and sample a slice of life on this barrier island resort.

At the north end of the village tourists stroll the porch of the Oceanic Hotel where a boy’s kite spirals into the wind near its oceanfront. At the south end near the lifeguard stand beside the Hanover Seaside Club swimmers in their old-timey onesies cluster around the edges of a beach blanket. In between young lads fish from a sea wall. On the model’s channel side skiffs and prams set sail in front of the Carolina Yacht Club while open boats troll Banks Channel.

Wrightsville Beach historian Bill Creasy recalls he and Greg Watkins conceived the idea of a model of the old beach. It was the mid 1990s. Both were the first officers of the Wrightsville Beach Preservation Society a group actively engaged in rescuing the town’s historic architectural core. Creasy says while Watkins raised funds to move the historic Myers Cottage from its South Lumina address to become the Wrightsville Beach Museum of History on West Salisbury Street he and professional model maker Maricam Kaleel began to envision a model that would become the museum’s centerpiece.

Creasy says in his mind to begin they needed to build the cabinet on which the model would rest. That cabinet was crafted by local woodworker Ralph Jensen of the Master’s Touch. For Kaleel the first step was establishing the model’s topography. The model is an authentic replica of the town from Station One to Lumina Pavilion Kaleel says.

“There weren’t really any maps that we could work from because the beach had changed so much ” she says. “Between Greg and I we had drawn how far apart we thought the buildings were and . . . where some mounds might be.”

Kaleel — a career model maker who had worked for architectural firms in Raleigh developers in southeastern North Carolina and built the Cape Fear Museum of History’s model of Fort Fisher diagramed the layout for the Wrightsville Beach model and drew the plans for the land that would be foam milled in Maine to her specifications.

“That’s a solid piece of foam ” she says. “I would go in and sculpt certain parts or I’d cut and fit and set the buildings in a little deeper. We worked and labored on it hard to try to get back to the historical look of what it would have been.”

The landscape was created by Kaleel but the idea of a working model with moving trolley cars was Creasy’s.

“Bill was responsible for laying the track and anything that had to do with the trolley ” Kaleel says.

“That’s the first thing I did was lay the track for the trolley and wired it up ” Creasy says.

Ted O’Quinn of Harbor Island was among the many who had his hands on the making of the model and later its restoration. Though model making has been one of his professions he was a latecomer to the process.

The model O’Quinn says was rendered in N scale a common model train scale but not a common architectural scale.

“The reason it was done to that scale ” he explains “is because that was the scale of the trolley car that was available so buildings had to be matched to scale with that.”

The N scale Creasy says is mainly because of the trolley “but we couldn’t go much bigger.”

“That was one of the toughest things was coming up with the scale to get the whole beach on there that would fit into a room ” Kaleel says.

With no blueprints to work from Kaleel drew plans from photographs.

“It was very exciting. Everybody’s bringing you photographs and postcards ? or a piece of the puzzle you couldn’t see from one angle because somebody brought you that perfect photo ” Kaleel says.

“The walls were styrene that were already stamped. Each shingle on that roof was laid piece by piece. We were trying to find something that was realistic to the time and it had to be handmade ” Kaleel says.

Most of the details — from the railings on Lumina Pavilion the jetties and power poles to the water tower — were built from scratch she says.

O’Quinn says “I generated the yacht club building and some of the little accoutrements around it some more boats and some people ” O’Quinn says pointing to a scale version of a lifesaving boat and a bather in a red bikini.

“It’s a very elaborate process ” O’Quinn says. “It’s very tedious. If you look at the detail in some of those larger models she spent an awful lot of time on it. There were hundreds of hours in it. There is a span of life for these models if they’re subject to people touching them ” O’Quinn says. “If it were protected it could go on indefinitely. The plastics are all durable materials. . . . Historically some museums have models 100 years old.”

Kaleel says “When you do a model like that it’s like ‘Wow ‘ because you’re just picking the history out. You just feel like you’re there. When you do historical models and you look back at an old photograph and you can look at the photograph of the model and you go ‘Oh my goodness ‘ and you captured it that was what it was all about ” she says. “The people who came in that gave us the information they were in love with Wrightsville Beach. They really cared about what was going on. You get involved with people this was something that was important. Bill Creasy was living and breathing it because he grew up on that beach. All these guys came out of the woodwork.”