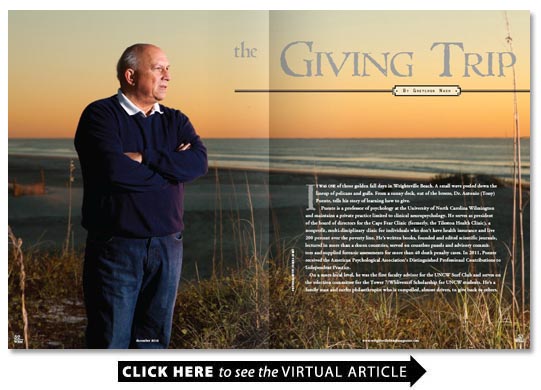 It was one of those golden fall days in Wrightsville Beach. A small wave peeled down the lineup of pelicans and gulls. From a sunny deck out of the breeze Dr. Antonio (Tony) Puente tells his story of learning how to give.

Puente is a professor of psychology at the University of North Carolina Wilmington and maintains a private practice limited to clinical neuropsychology. He serves as president of the board of directors for the Cape Fear Clinic (formerly the Tileston Health Clinic) a nonprofit multi-disciplinary clinic for individuals who dont have health insurance and live 200 percent over the poverty line. Hes written books founded and edited scientific journals lectured in more than a dozen countries served on countless panels and advisory committees and supplied forensic assessments for more than 40 death penalty cases. In 2011 Puente received the American Psychological Associations Distinguished Professional Contributions to Independent Practice.

On a more local level he was the first faculty advisor for the UNCW Surf Club and serves on the selection committee for the Tower 7/Wblivesurf Scholarship for UNCW students. Hes a family man and surfer philanthropist who is compelled almost driven to give back to others.

From Everything to Nothing

Looking at Tony Puentes successful career and family life in Wilmington today its difficult to imagine him as the 8- or 9-year-old boy whose family fled Cuba to arrive in Miami without knowledge of the English language or American culture.

Life in Cuba had become increasingly difficult for the Puente family in 1960 but when citizens economic holdings were nationalized the existing legal system was abolished. Children were forced to cut sugarcane and become indoctrinated into the new Communist Manifesto the Puentes left for Miami Florida with only $350 and an armful
of expensive watches they would pawn for food lodging and other necessities.

I didnt know poverty until I came to the United States says Puente who was born into and reared by a very wealthy family. Poverty to the point where there was little food. My dad got down to nine cents. Its always good to have a baseline.

Puente says that without the intelligence resiliency and drive of his parents the generosity of people the charity of the Catholic Church and the refugee association in the United States the family wouldnt have survived. It was a shock for the young family who once had everything and then had nothing.

His grandfather had been a member of parliment and Puentes father had been involved in the management of International Harvester a large agricultural manufacturer.

But the Puente family did survive to eventually thrive in America. Young Tony learned the English language and excelled in his schoolwork. After high school he enrolled in a community college and out of necessity fast-tracked his way through undergraduate graduate and doctoral degrees.

One I didnt understand the system and two I didnt have the economic resources he says. The deal was how fast will the system let you go through it? Its not what I would suggest to my own children who are getting their own PhDs.

Thats beyond doubt. I live it! And I try to instill that in my children. I appreciate the value of freedom and I dont take it for granted. Im very lucky to be in the United States he says.

When you have more money than you can shake a stick at and then you have no money. And the generosity of people around you some people that you never meet actually put food in your mouth teach you English give you a ride to activities it means something. It means it is time to give back.

The Spirit of Aloha in Cuba

Like most hardcore surfers Puente has toted his boards all over the world in search of good uncrowded surf. And each time hes traveled hes given back to the local community.

Within the last few years Puente and several other members of the Wrightsville Beach Longboard Association (WBLA) took a surf trip to La Saladita Mexico better known as the Mexican Malibu for its long left point break. The surfers had raised enough money to have the local Mexican school painted.

But just last summer Puente and his two sons both of whom are in the process of getting their PhDs decided to take a different surf trip. It was time to go back to Cuba and as Puente says they tagged it with giving.

Surfing in Cuba? Well Puente concedes they didnt have much to go on a short article in Surfer Magazine and a segment in a Taylor Knox surf movie 12 years ago but this wasnt an ordinary surf trip.

Before departing Wilmington Puente put out a call to the WBLA membership for surf stuff. We got four surfboards about three dozen baggies T-shirts leashes wax decals you name it even a wetsuit which turned out to be really useful he said. And off to Cuba we went!

For father and sons the rush of enthusiasm didnt last long.

First the charter airline had never seen a surfboard. Customs people in Cuba didnt know what a surfboard was he said. And then we couldnt even put the surfboards on top of the car because it was illegal to carry anything on top of a car!

So far the goodwill surfing trip was not going as planned.

Here we were trying to spread the Aloha spirit and all we got were barricades left and right he says. It was really difficult.

The Puentes were being reminded of how precious their freedoms are back home. In Cuba everybody receives $15 a month even Puentes relatives who are professionals.

They give you enough food for about a week and some of the other things are somewhat subsidized but in essence if I had to guess youre given about enough to make a poor go of it. Youve got to generate the other half. For example gasoline costs the same as in the United States. They dont go anywhere. And if they go anywhere they have to ask permission he explains.

Its not enough Puente says. Cubans are always trying to figure out how to make it. For example if youre young and attractive you might become a prostitute a jinetera. If you have a car which you just inherited from your great-grandfather in 1959 you do a taxi.

And what do you do with a carload of illegal surfboards rash guards and flip-flops? You give them to your family. Puentes Cuban family all highly educated professionals ironically happen to be on the national sailing team and have access to sailboats. Because they cater to tourists not Cubans theyre allowed to make a little extra income through their sailing and scuba-diving.

And yet it was the small surprises that left Puente and his sons speechless. In addition to a quiver of beautiful boards and gear they carried aspirin toothpaste medical supplies toothbrushes and toilet paper. Before leaving the States they creatively packed toilet paper around the surfboard fins for travel.

So when we unpacked the surfboards you know what my relatives were so enthusiastic about? The toilet paper.

Everyday items that Americans take for granted are either too expensive or just arent available for sale. In Cuba attendants at the entrance to public restrooms hand out one sheet of toilet paper to each person.

The Puentes flew back to the States several pounds lighter but with a sense of good will.

You feel like you have no choice but to share as much as you have he said. When its all said and done we have so much more thats extra especially in our society. Its beyond what we can imagine.

Puente acknowledges it seems easy to give when youve got so much and yet he is compelled to give back not only because he has so much but because he once had so little.