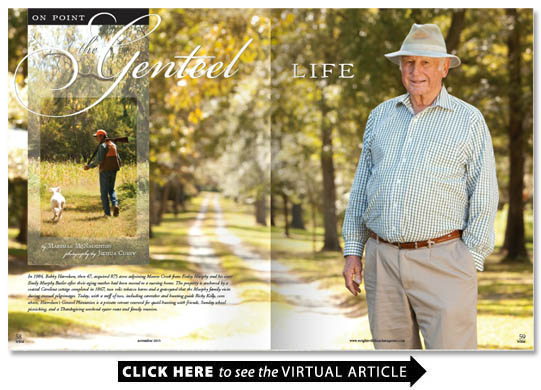 In 1984 Bobby Harrelson then 47 acquired 875 acres adjoining Moores Creek from Finley Murphy and his sister Emily Murphy Butler after their aging mother had been moved to a nursing home. The property is anchored by a coastal Carolina cottage completed in 1867 two relic tobacco barns and a graveyard that the Murphy family visits during annual pilgrimages. Today with a staff of two including caretaker and hunting guide Ricky Kelly seen above Harrelsons Genteel Plantation is a private retreat reserved for quail hunting with friends Sunday school picnicking and a Thanksgiving weekend oyster roast and family reunion.

Ive been quail hunting all my life. As a kid I killed my first quail when I was about 12 he says. Always fascinated me; they scare you to death when they flush they make so much noise. Back then we didnt have dogs wed just walk around the field.

This place is not just hunted its a family place Harrelson says. The week of Thanksgiving is always kind of the highlight week of the year. All the family comes here.

Harrelson one of the regions most successful real estate developers says In my heart I always wanted to be a farmer.

Inside the dining room of the old house he restored and later enlarged Harrelson his wife of six and a half years Estelle and his caretaker Ricky Kelly share fried chicken served with white rice and brown gravy charred okra cooked cabbage butter beans and homemade biscuits prepared by Louise Spencer Genteels cook.

Harrelson says   This is a pretty standard meal up here when we have guests.

As the bowls and platters slide across the pine table the serving spoons and forks clatter against the china and the ice melts into tumblers of sweet tea Harrelson tells the story of Genteel Plantation his by-invitation-only refuge.

In early November — after the last frost after the leaf-fall and all the ticks are gone
Harrelson invites two of his friends at a time to Genteel for one reason: to hunt quail.
Personally I come out on a Sunday afternoon and invite a couple of fellas thatll come spend the night during hunting season. Well hunt Monday morning and have a light lunch Harrelson says. I dont invite anybody that I dont know. I dont invite amateurs to hunt with me.

Quail are not called like ducks and geese they are flushed from the brush by pairs of dogs and hunters. Considered the sport of kings or the gentlemens sport etiquette dictates the shoot.

Kelly who has been Genteels caretaker for the last 27 years is also Harrelsons personal hunting guide. He raises quail from day-old chicks turning them loose about seven weeks later into food plots that provide both food and shelter for the covey. Kelly also trains the plantations five English setters and four English pointers along with his two Labrador retrievers Bullet now retired and Ellie May a pup. He says the dogs after a little while know the route as well as he does.

Im going to park the truck and walk in a giant circle and back to the truck Kelly says hunting all the food plots that are all over this property. We find the dog on point. We go to the dog hes pointed birds. He doesnt see them he smells them. Im going to be in the middle because Im not shooting Kelly says.

Were spread out a little bit Harrelson says. The fellow on the right does not shoot a bird coming up on the left hand side. You leave it alone. Its not your territory; its not your bird. Most good quail hunters are very gentlemanly about it.

They come up and go straight away Kelly says. They might not fly that high off the ground this time. And the next one might fly 15 20 feet off the ground. So you never know.

As the shoot progresses Kelly says Im looking at where all the birds are going that didnt get shot at. We try to chase down some of the singles. You call them singles after theyve busted out of the covey Kelly says.

After the dogs retrieve the dead ones Kelly pockets them in his vest eventually transferring them into coolers. Later with a helper hell clean and skin them.

Louise Spencer fries them. Harrelson Estelle and Kelly agree they taste like chicken.

What makes quail hunting so interesting Harrelson says theyre challenging little birds theyre good to eat but you can go around with people and you dont have to be quiet. Talk it doesnt bother the birds. Enjoy and have good fellowship while youre hunting.

Every now and then he says a hunter may come to Genteel for the thrill of the kill.

They generally dont come back Harrelson says. This is not about the kill. Its about being here. I like fellowship with people. Bob Timberlakes been a friend of mine. He likes to come and quail hunt.

North Carolina artist and tastemaker Bob Timberlakes signed and numbered prints are hung around the house and his upholstered furnishings are arranged inside Genteels living room beneath hand hewn beams. This sets the stage for Harrelsons collection of antiques wooden bread bowls baskets and quilts.

In the center hall is an old banking table that holds the guest book. One memorable occasion Harrelson says was the day the  late Congressman Charlie Rose called. Charlie and I differed on politics but we liked each other Harrelson says.

Rose once a member of the U.S. House of Representatives  Agriculture Committee was frequently exchanging favors with Great Britain. He asked Harrelson if a contingent from Parliament could come to Genteel for a visit.

We had a barbeque pig picking. There were 40 to 50 everybody together. Winston Churchills grandson was in the mix Harrelson says.

But others have not been so fortunate as Timberlake or Congressman Rose.

Somebody asked me in town one day said You know heard a lot about that place you got out there and quail hunts. How do you get to go out there? I said By invitation. He still hasnt been Harrelson chuckles.

The Dogs are the Treat

More fun than the hunting is watching the dogs says Genteel Plantations long-time caretaker hunting guide quail raiser and dog trainer Ricky Kelly. Theyll be in a dead run and theyll smell that bird — all of a sudden they realize theyve run by a bird and theyll skid around and when they do they stop like a statue and they wont move. And theyll stay there til I find them. They wont even turn their heads.

Tails up Kelly says the dogs will move their eyes back and forth when they hear him coming.

If my dog sees that dog pointing then he stops and points that dog. If theres three dogs then youve got all of them pointing the lead dog. Its the treat Kelly says.

In the beginning of the season I take three dogs at a time trying to get them in shape more than anything else. When we go hunting they dont walk around theyre running. Theyre all over here and over there and Im trying to keep up with where theyre at all the time because when I lose them theyre pointed and theyre not supposed to come when theyre pointing Kelly says.

Walking four miles five miles hunting he estimates the dogs run as many as 15.

When I finally got everybody in shape I cut it down to two dogs. Its easier for me Kelly says. The bird will stay put most of the time because he knows the dog is there and hes hiding in the bushes. Theyre not dumb. Especially after theyve been hunted once. They wise up pretty quick.

Raising more than 600 quail this summer Kelly says theyll shoot about 1 000 during the season.

We eat every one of them Kelly says. They all get cleaned and they all get eaten. We cut them up the back that way it lays them open. You clean them out and leave them whole legs everything breast. And if you leave the breastbone from the backside it makes them lay flat in the pan so it doesnt stand up. Because that way itll cook evenly.