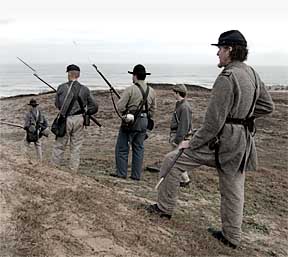 The sight was both spectacular and unnerving to Confederate soldiers manning their artillery batteries onshore.

Sixty-four Union warships slowly advanced toward the Cape Fear coast on the dark gray Christmas Eve morning in 1864 each one ready for battle. Their target was mighty Fort Fisher the Confederacy’s main fortification guarding Wilmington North Carolina the South’s only seaport still open to trade with the outside world and arguably its most important city. “A grander sight than the approach of [the Federal] armada toward the fort was never witnessed on our coast ” recalled Colonel William Lamb the officer who designed and built Fort Fisher and now would have to defend it against the largest naval task force assembled during the Civil War. The survival of Wilmington and the Confederacy depended upon Lamb’s success.

General Robert E. Lee had recently sent word to military authorities in Wilmington that if the city fell “he could not maintain his army.” Since the late spring of 1864 Lee’s Army of Northern Virginia had been engaged in a war of stalemate and attrition with Union forces commanded by General Ulysses S. Grant between Petersburg and the Confederate capital of Richmond Virginia. Like two stubborn pit bulls the armies were locked in savage combat with neither side showing any signs of giving up. But with far fewer soldiers and supplies the prolonged fighting was taking a heavy toll on Lee’s gray-clad army. Much of the food and equipment keeping Lee’s men alive and in the lines came from Wilmington thus accounting for the commanding general’s cautious message that the Carolina seaport must remain in friendly hands or his army and the Confederacy were doomed. Colonel Lamb understood that he faced a desperate challenge at Fort Fisher.

By 1864 Fort Fisher was the largest and strongest fort in the country and was dubbed the “Gibraltar of the South.” Unlike many conventional forts Fisher’s massive walls were made of beach sand. Before the war America’s coastal fortifications were constructed mostly of brick and stone to protect its seaports from foreign invasion. Fort Caswell on Oak Island (at the mouth of the Cape Fear River) that guarded Wilmington and Fort Macon near Beaufort North Carolina were typical of the pre-war forts built along both the Atlantic and Gulf coasts. By the Civil War however brick and stone forts were made obsolete by improved weaponry. Heavy artillery bombardments could pound such fortifications into rubble as had been the case when Union forces attacked Fort Pulaski near Savannah Georgia in April 1862. From that point on Confederate forts were constructed mostly of dirt and sand which could be displaced but not destroyed by bombardment.

Confederate engineers designed networks of earthen defenses to protect Wilmington and other key cities from capture. By the summer of 1863 when Union forces put Charleston under siege warfare Wilmington became the Confederacy’s most important seaport on the Atlantic seaboard. Shippers transferred much of their operations from Charleston where maritime trade was now uncertain at best to Wilmington 175 miles up the coast. An increasing number of sailing ships and steamers imported essential supplies from Europe into the Confederacy by way of Wilmington to meet the needs of civilians on the home front and soldiers on battlefronts. To get supplies in however these vessels had to run a gauntlet of Union ships blockading the mouth of the Cape Fear River.

Lacking the industrial facilities necessary to produce military arms and equipment the Confederacy looked to Europe especially Great Britain for supplies to help meet its wartime needs. President Abraham Lincoln hoped to prevent maritime trade from developing between the Confederacy and Europe when he proclaimed a naval blockade of the Southern states in late April 1861. Declaring a blockade and enforcing it however were two different matters.

The lack of U.S. Navy ships at the beginning of the war the lengthy coastline from Virginia to Texas and the numerous seaports and inlets to blockade made it virtually impossible to halt all waterborne commercial activity. Southern buyers and European suppliers established shipping companies to handle the overseas trade that soon began thwarting Lincoln’s plans. In exchange for Southern commodities — mostly cotton and naval stores — the Confederacy imported rifle-muskets artillery ammunition swords bayonets wool cloth for uniforms blankets shoes medicines and food as well as all types of civilian goods.

By 1865 more than 1 600 ships of all classes — schooners barks and steamers foremost among them — had been employed as blockade runners. About 1 300 of them were sailing vessels used until 1863-1864 when the blockade had tightened to the extent that it became difficult to break it by wind power alone. Steamships were used more often in the last year-and-a-half of the war relying upon speed and stealth to challenge Union blockaders hovering around the entranceways to Southern harbors. About 70 different blockade running steamers with names like Banshee Bendigo Phantom Ranger and Colonel Lamb operated in and out of Wilmington enjoying a phenomenal success rate of about 85 percent despite the heavy blockade.

Blockade running proved to be a lucrative trade as shipping firms made substantial profits selling or auctioning blockade run goods. But profits often came at a high price. Many Confederate merchant vessels were captured or destroyed by Northern blockaders as they attempted to enter or exit Southern ports. About 30 blockade runners were wrecked along the Cape Fear coast and the skeletal remains of some of them can still be seen just offshore at low tide including the General Beauregard at Carolina Beach.

The steamer Alice was one of the most successful blockade runners that traded at Wilmington. Built as the Sirius by Caird and Company of Greenock Scotland in 1857 she measured 231 feet in length 26 feet wide and drew nearly 13 feet of water. The Importing and Exporting Company of South Carolina purchased her in 1863 and converted her into the blockade runner Alice. She successfully ran the blockade 24 times.

Wilmington offered great advantages for blockade runners like the Alice. The seaport was located near the neutral British transshipment points of Bermuda and Nassau in the Bahamas. Vast quantities of supplies were transported on large ocean-going merchant ships from England to Bermuda and Nassau where they were transferred to smaller blockade runners for the final dash into the Confederacy. At the Cape Fear blockade runners could access Wilmington’s harbor by one of two passageways — Old Inlet at the mouth of the river and New Inlet a shallow passageway 5 miles to the northeast. Wilmington also had good lines of communication throughout the southeast. The Cape Fear River was navigable to Fayetteville 90 miles upstream from Wilmington and three railroads tapped the seaport. The most important of these rail lines was the Wilmington and Weldon Railroad the main supply route for General Robert E. Lee’s Army of Northern Virginia by 1864 — little wonder that Southerners considered Wilmington the lifeline of the Confederacy.

Wilmington’s importance as the South’s main seaport led the Confederate government to do all it could to defend the city. Next to Charleston Wilmington became the most heavily fortified location on the Atlantic coast. The town itself was surrounded by strong earthen works while auxiliary batteries stretched up and down the river and along the beaches. The strongest interior work was Fort Anderson built atop the ruins of the colonial port of Brunswick Town on the west side of the Cape Fear River. The largest and best-armed forts however were built to safeguard the river entrances used by blockade runners. Fort Caswell on Oak Island and Fort Holmes on Bald Head Island overlooked Old Inlet while Fort Fisher guarded New Inlet.

New Inlet had been created by a severe storm in the late summer of 1761 at a narrow spit of sand called the “Haulover” at the tip of New Hanover County. One hundred years later New Inlet became the most popular passageway used by blockade running ships at Wilmington.

The narrow peninsula above New Inlet was called Federal Point but Southerners renamed the area Confederate Point during the war. Engineers began erecting sand batteries on Confederate Point flanked by the Atlantic Ocean to the east and the Cape Fear River to the west as early as April 1861. By September of that year the defenses were named Fort Fisher in honor of Colonel Charles F. Fisher the first North Carolina field grade officer killed in the war at the Battle of Manassas Virginia on July 21 1861. Colonel William Lamb of the 36th North Carolina Regiment assumed command of the military construction project on July 4 1862. After touring what he defined as works that “amounted to nothing ” Lamb determined to expand and strengthen the fort so that it could withstand the heaviest cannon fire of the U.S. Navy.

Lamb a lawyer and newspaper editor from Norfolk Virginia had little experience building forts before he arrived on Confederate Point. He had formerly commanded Fort St. Philip (renamed Fort Anderson in 1863) at Brunswick Town. There he became interested in military engineering. His superior officer Cape Fear District commander Major General W.H.C. Whiting recognized the young man’s talents. Under Whiting’s supervision Lamb designed and built Fort Fisher from a scattering of sand batteries into the mightiest fortress in America. Lamb regularly worked his laborers six days a week and seven days a week when rumors of attack reached him. Construction of the fort also took place under the watchful eye of Union blockaders sitting off New Inlet. They occasionally lobbed shells onshore in an effort to disrupt the Confederate work parties. Undeterred Lamb pressed on with the construction.

By 1864 Fort Fisher was a massive two-sided sand fortification that looked like a giant number “7” from a bird’s-eye view. A series of elevated artillery batteries mounting 44 big seacoast cannons was connected by a broad sand rampart that rose from 24 to 32 feet above ground and stretched for about 1 mile. Thousands of cubic feet of sand were piled up one shovel-full one wheelbarrow load at a time by Confederate soldiers working alongside enslaved African-American laborers.

The fort’s land face — the short shank of the “7” — stretched for 500 yards from the river’s edge to the sea and guarded the northern land approaches to the fort. Underneath the fort’s embankment was a series of interconnected bunkers or bombproofs where soldiers could seek refuge during battle. A palisade of heavy timbers and a web of mines buried north of the land front supplemented the earthen defenses.

The land and sea face batteries intersected in the northeastern corner of the fort about 100 yards from the ocean’s high watermark. Here the fort’s batteries turned southward running parallel to the shoreline for about 1 300 yards. At the southern end of the sea face towered a 43-foot high conical-shaped gun emplacement named Battery Lamb but nicknamed “Mound Battery.” Its immense profile could be seen for miles at sea and blockade runners depended upon it for both navigation and protection as they approached New Inlet.

Blockade running sailors often referred to Colonel Lamb and his Tar Heel artillerists as their guardian angels. Many times during the war their booming cannon turned away pursuing enemy gunboats allowing blockade runners safe passage into the harbor through New Inlet. In appreciation sea captains often brought gifts and toys from Europe for Lamb his wife and children who lived in a small cottage half a mile north of Fort Fisher.

Both Colonel Lamb and General Whiting believed that a massive fortress like Fort Fisher would be needed to defend Wilmington against a Union land and sea attack they were certain would eventually come to the shores of the Lower Cape Fear. Whiting most feared a land assault on the north side of Wilmington where the defenses were weakest or by a Union amphibious landing at Wrightsville Beach and an advance against the city from the east thus bypassing the big forts at the mouth of the river.

But now the enemy’s attack plans became known as the grand Union armada approached Fort Fisher on Christmas Eve 1864. Lamb hoped that he had prepared well for the great battle that was about to take place. Much was at stake.

Next month — The Storm of War: The battle at Fort Fisher 1864