A six-bay garage is transformed into an industrial style home for a family of five. 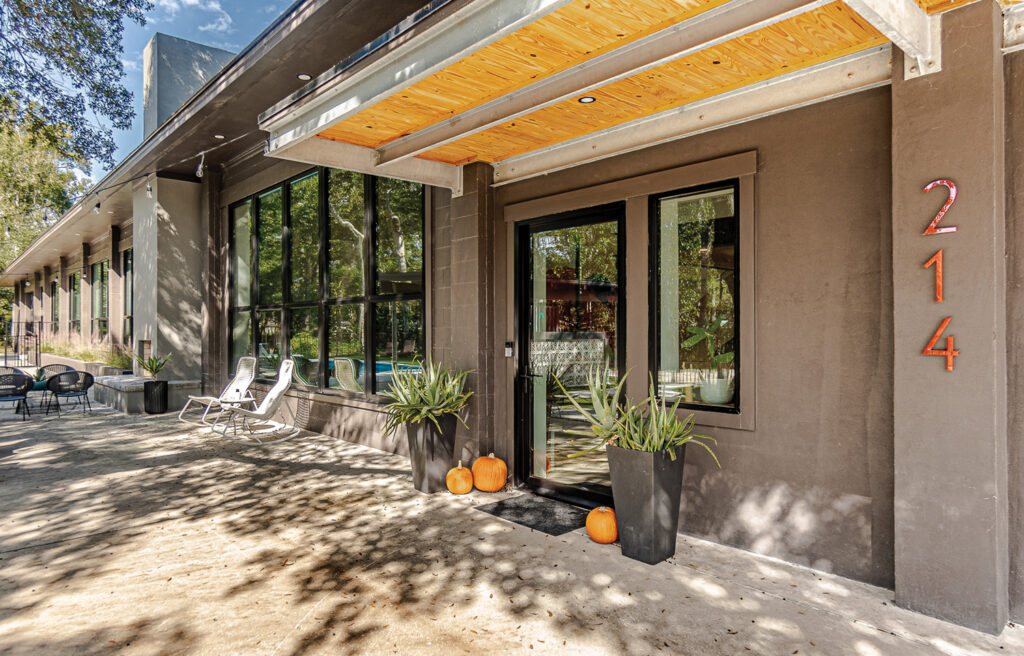 “Wait, you’re moving into your garage?” was the reaction of family, friends and neighbors when Joel and Jayna Crittenden would tell them their plans.

“I kept saying, ‘I promise, it’s going to be awesome,’” says Jayna Crittenden.

The Crittendens, with the help of Romero Architecture and Christopher Building Company successfully transformed a 5,600-square-foot, six-bay garage on the back of their property into an industrial-style dwelling for themselves and their three children. Tucked away in the sprawling live oak trees of Summer Rest Road, this unique makeover brings to life a functional family home inside a former commercial building.

“It was amazing watching the transformation. It turned out better than we imagined,” says Joel Crittenden.

The question remains, however, why was there a 5,600-square-foot, six-bay garage equipped with an oil changing station on the back of the Crittenden’s property to begin with? The answer is … Bill Dobo.

Those who have lived in the Wilmington area for a while may recognize the name. He was a wealthy businessman and philanthropist as well as a bit of a character. He and wife Barbara Beckwith Dobo gave generously to many organizations and charities. Dobo Hall and Beckwith Recital Hall at UNCW bear their names.

They were the original owners of the property, living in their 1960s-built mid-century home on several acres.

Dobo, along with his brother, was the founder of Cape Fear Utilities and Quality Water Supplies, which reportedly sold to the city of Wilmington for more than $22 million in 1999. That’s about the time Dobo built the massive concrete garage behind his house for his cars and trucks, and apparently his bandsaw for cutting logs that he fought in court to be able use on his property. The case went all the way to the North Carolina Supreme Court and Dobo won.

In 2015, the Dobo house and property off Summer Rest Road on Beech Street went up for sale. Enter the Crittendens, home makeover hobbyists. They were looking for a new project and went to see the house.

“I actually teared up when I walked in. The design was genius, it had this great basement. It was a mess, but we immediately saw the potential,” says Jayna.

Even better, the six-bay garage out back came with it.

“I thought, ‘This is great, we’ll figure out something to do with it,’ but living in it never even crossed our minds until years later,” says Joel.

They renovated the house and lived there for seven years. They began hanging out in the garage during Covid quarantining, and started to imagine what it might be like as a house.

“We talked about renovating it kind of jokingly and then we got serious and decided to give it a shot,” says Jayna.

Outside, a fireplace and a pool by Airlie Outdoor are surrounded by pavers and turf by Synthetic Turf Solutions NC and a fence by Black Dog Fence. During construction, Janya suggested turning the 20-foot shipping container used to store Joel’s tools into the pool house.

“I had a guy lined up to buy it when I was done with it, but I lost that battle,” laughs Joel.

The dark gray exterior paint was also used for the container and a slider was installed on the front.

“It actually looks pretty cool, it ties it all together,” says Joel.

They sold the remodeled mid-century home in 2021 and began construction on the “Garage House” with plans to construct four bedrooms, four and a half baths and living spaces of industrial modern style.

It was their sixth home renovation, but for obvious reasons this one was a little different. Brought in were contractor Bill Christopher of Christopher Building Co. and architect Rob Romero of Romero Architecture.

“You go back there and it was this big white box of a thing and you’re thinking to yourself, ‘What do we do with this,’ and then you start laying out the rooms and you see the height. It’s all kind of amazing, it came out incredible,” says Romero.

There were challenges. The garage bay doors had to be replaced with large windows. Additional windows had to be added for natural light, which meant cutting through thick concrete block.

“For me, it had to be a cool looking grid that fit the vibe of the building but also made the interiors work,” Romero says.

Windows are by Coastal Window and Door Center. Harbor Roofing and Siding did the roof.

“Color makes me happy, I love pinks, reds, teals, aqua, orange … if done right, they all look so good together,” Jayna says.

A pair of mauve swivel chairs by the great room window tie in a slice of mauve in the mural. Jayna looked for good buys on modern finds. Fun tiles used in bathrooms, the kitchen and pantry come from a variety of vendors including TileBar and Floor & Décor and were installed by Trevi Tile Installation. Tidewater Glass installed shower enclosures, backsplashes and glass railings up the stairs of the great room leading to an office loft.

Jayna, who admits to having a slight chair obsession, found much of the furniture online.

The building was long, 175 feet from front to back, and narrow, only 31 feet wide with 15-foot-tall ceilings.

“It really felt like it had the workings of a commercial upfit where you come in and you have a cold, dark shell to start with. As we turned the corner and got the walls in, it started to become more of a residential project. It was almost like we were building a house inside a shelter,” Christopher says.

It was decided to put the hallway along the back of the house and then configure the kitchen and great room. All plumbing and electrical were added by Aguirre’s Electrical Service and Fulford Heating & Cooling; appliances are by Atlantic Appliance & Hardware. The building went from having one bathroom to five.

Christopher, who calls the house the “Garage Mahal,” says the hallway is the most dynamic feature.

“It’s by far the longest hallway I’ve ever put into a home. It’s so cool, there’s the light and this long geometry. It’s a pretty neat visual in that you can still get a little feel for how it used to be,” Christopher says.

Next came deciding on one floor or two. The Crittendens chose to keep vaulted ceilings and add lofts to great rooms and bedrooms.

Jayna did all the interiors. She began with a blank canvas of white walls and polished concrete floors. She added color with furnishings and fixtures and wall art such as the 20-by-9-foot mural by local artist Carleigh Sion.

“The kids’ rooms each have a loft over their room; it’s really cool and gives them some privacy. It’s where they have comfy chairs or a couch, a place to have a sleepover,” says Jayna.

“Wouldn’t that be great to be a kid and have a loft, just fun, right?” says Romero.

The couple have been renovating homes since they met. The “Garage House”/ “Garage Mahal” is their favorite so far.