The Future is Bright for Delilah Hutchins 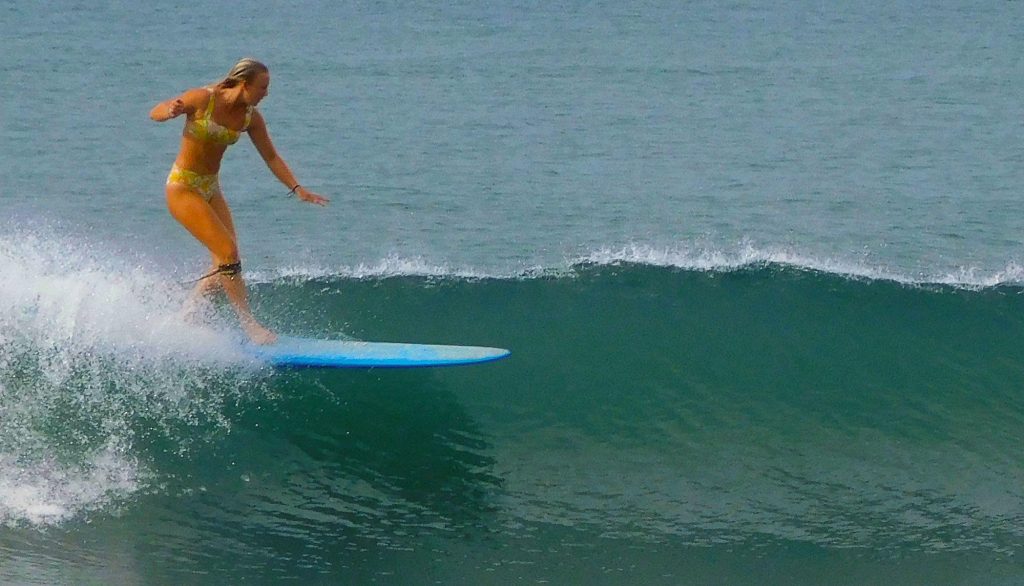 Delilah Hutchins’ family are big surfers — in surfing parlance, dialed in — a fixture on the best days, those fleeting windows of time when the wind, tide and swell come together.

The 15-year-old spent three years surfing Wrightsville Beach on almost a daily basis. She put a lot of time into it, competing in Eastern Surfing Association events in Carolina Beach, Wrightsville Beach, and up and down the coast of North Carolina, winning some and losing some but always striving to get better.

Delilah now lives with her mom, Amelia Hutchins, in Nosara, Costa Rica. Mother and daughter moved there in search of bigger, more consistent waves that would help Delilah meet her goal of becoming a professional surfer.

“The waves in Wrightsville Beach were pretty small and controllable, managable for me,” she says. “I always felt safe. In Wrightsville, I knew I was better than the average surfer.”

She now trains with surf coach Kali Artavia and has the opportunity to ride waves that challenge her. Many of the waves that reach the shore on the Pacific side of the Central American nation travel from as far away as Antarctica. On the days with the biggest waves, she says she doesn’t always go out.

“For the locals its a pretty easy wave,” she says. “But some days I feel nervous. It’s a lot bigger than Wrightsville Beach. I love the waves here, but I get out of my comfort zone.”

Even though she was born into a family of surfers and had her first lesson at age 3, she says she didn’t immediately take to the sport.

“I hated it. I couldn’t do it until I was 12,” she says. “But it was something calling my name. I decided to get over my fear and just do it.”

The support of her surfing mother has been essential to her development. Amelia and Delilah were transfixed when they first visited Nosara one September during the rainy season. They knew Wrightsville’s legendary Crystal South Surf Camp surf instructor Jo Pickett, who leads surf trips to Costa Rica, but no one else. They didn’t speak Spanish. But Amelia, a single mom, decided it was worth it to help Delilah meet her goals.

“What were our options? Where can we go for more consistant waves?” Amelia says. “She wanted to compete.”

After visiting Nosara a few times, the two of them took a tour of Del Mar Academy. After finding out more about the school and the Nosara community, many of Amelia’s concerns evaporated.

Delilah would have the opportunity to learn Spanish by emersion as part of the International Baccalaureate program, a unique academic curriculum that emphasizes the personal development of students. Delilah, a Cape Fear Academy student, had unsuccessfully applied to get into the same program at Hoggard High School in Wilmington.

The idea that she could help Delilah chart a path to her dreams proved to be a strong motivator.

“I think that living abroad makes you a more flexible, well-rounded person,” Amelia, a talented artist and entrepreneur, says. “This seemed like great exposure for Delilah, as there are people from all over the world living here.”

Leaving everything she knew behind did not produce a range of fear and anxiety in Delilah. This was the ideal place to pursue her dream of being a pro surfer.

Fast-forward nine months, and Delilah feels at home in her ninth-grade class. The 10 to 12 teens are often mixed with the tenth grade, Montessori style, for an enviable combined class size of 23 students.

“We get a lot of one-on-one with the teachers,” Delilah says.

Butterflies, birds, lizards and even monkeys are a common sight in the classroom that’s open on two sides.

“Huge iguanas will walk through our class,” she says. “I’ll be the only one that’s shocked. I’ll step outside and see monkeys swinging through the trees.”

She became a member of the 13-guy Nosara Surf Team, owing to the fact that there was simply no other competition.

“I am the only girl on it,” Delilah says.

“He’s hard. He’ll push me to go in conditions I am not comfortable with,” she says. “We went to Nicaraugua. The waves were big and scarey, over rocks, a mile paddle out. He just pushed me. I had to just trust him in that. He has confidence in me.”

Increasingly, she has confidence in herself, challenging the guys on the team for the best waves.

“She is not afraid to mix it up with the boys,” Amelia says.

Delilah has become an inspiration to many of the young women she has encountered in her new home and the surrounding areas.

“It was so cool to meet these little Nicaraguan girls recently, who kept asking to have their picture taken with Delilah,” Amelia says. “Delilah’s surfing experience here as the only girl competing with the Nosara Surf Team has been similar to my own experience growing up and never seeing girls in the water. There were just not a lot of women surfers around back then.”

For those who are not outliers, innovators or groundbreakers, seeing an example or a role model is essential to visualize ourselves in that role. Of course, seeing her daughter become that person for a new generation of young women has made Amelia an even prouder mom than she thought she could be.

Amelia experienced a similar feeling of pride when they traveled to Noosa, Australia, where Delilah competed in the Noosa Longboard Open.

“Watching Delilah have a chance to surf against her heroes was an amazing experience,” Amelia says.

Though she admits that she felt a little nervous while her daughter was competing on such a big stage, she says Delilah seemed nonplussed.

It may seem counterintuitive, but her childhood experiences growing up on the East Coast are another asset in Delilah’s favor. People who are from wave-poor regions like Wrightsville Beach develop a sense of hunger for surf and a love for the sport that people from other areas simply cannot match.

Quickness, great timing and an extensive knowledge of the ocean are required to successfully ride short, windswell waves — traits that are not as much of a requirement elsewhere. All of these factors amount to the East Coast being a perfect breeding ground for a developing surfer, at least in childhood.

A quick internet search will show that many top names in the surfing world emerged from extremely wave-poor areas along the East Coast. Kelly Slater, Lisa Andersen, Ben Bourgeois, Cory and Shea Lopez, Ben and Michael Powell, and Tony Silvagni are just a few examples.

Delilah knows what it will take to join that list of luminaries.

“I have a chance [to go pro],” she says. “But I am not working as hard as I could. I’d have to put everything into it, start winning every single smaller competition. If not I am not going to get anywhere.”

With the phenomenal support of her mother, a new life in Central America with consistent, high-quality surf, and the perfect background to stoke her ambition, Delilah Hutchins is poised to put the surfing world on notice in the coming years.