The Flytrap: Gardening for Love 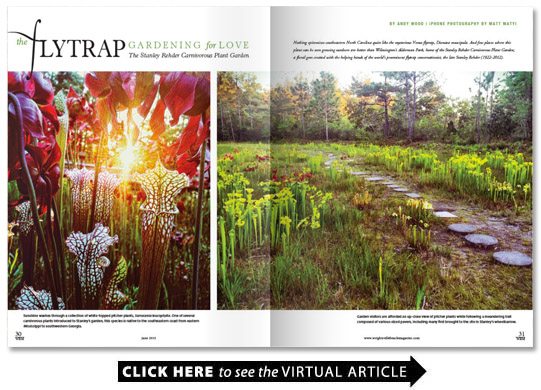 Nothing epitomizes southeastern North Carolina quite like the mysterious Venus flytrap Dionaea muscipula. And few places where this plant can be seen growing outdoors are better than Wilmington’s Alderman Park home of the Stanley Rehder Carnivorous Plant Garden; a floral gem created with the helping hands of the world’s preeminent flytrap conservationist the late Stanley Rehder (1922-2012).

I first met Stanley in the late 1980s when I was Wilmington’s City Naturalist. My primary work then involved building an outdoor nature center at Greenfield Lake to house local species of plants and wildlife including a flightless red-tailed hawk along with several reptiles and amphibians that served as living ambassadors for my education programs.

Right away Stanley offered to help me secure flytraps and other plants for a large concrete-lined bog built inside the fenced nature center. It was his offer that introduced me to the art and practice of flytrap cultivation; from seed collection and germination to propagating flytraps by rooting their leaves. Stanley a college-schooled plant biologist and horticulturalist was also an artist; he painted soil with flowering plants. I soon came to realize he was also a passionate and tireless conservation educator.

Alderman Park specifically the Stanley Rehder Carnivorous Plant Garden is something of an enigma — its origins anyway. When Stanley first toured me through the site sometime in the late ’80s his fledgling garden was little more than a curved depression about 150 feet long and maybe 20 to 30 feet wide. We speculated it was the result of a bulldozer moving soil during construction of Alderman School in the early 1960s. The serendipity of that earth-moving action came when Stanley stumbled onto the site discovering a riot of carnivorous plants had invaded the low wet place created by the chance activity of heavy equipment.

One man’s quest to create a garden for his beloved flytrap — a place where people could see this wondrous example of southeastern North Carolina’s most famous plant — ensued made famous by Stanley himself. Stanley gardened for love as much as for the science of it all and he embraced any and all who wanted to share his passion for our region’s plant communities.

Stanley’s garden has experienced setbacks in recent years including illegal flytrap poaching in 2013. But in reality the garden site was first damaged when that heavy equipment rumbled through the area no doubt pushing existing carnivorous plants aside. Luckily no further development occurred on the site and in time nature reclaimed the ground the surviving carnivorous plants especially whose seeds danced their way to an unintended garden scraped into their perfect medium: where organic pocosin soil and sandy longleaf pine soil meet.

I imagine when Stanley first saw this naturalized garden he had an instant vision for what this place could become. After countless hours spread over many years of careful tending Stanley’s skilled hands cultivated a priceless garden that has since grown to be a popular destination for carnivorous and other plant fanciers. It was so popular in the late ’80s and early ’90s that Stanley erected a mailbox stuffed with informative brochures providing visitors with fun facts about carnivorous plants.

The mailbox signage suggested visitors to “please take only one ” a simple request that people take only one brochure. Sadly Stanley’s well-intentioned message was interpreted by many as “take only one flytrap ” which is what happened. Stanley’s garden suffered its first major setback. Indefatigable Stanley called upon local newspapers and television stations to alert people about the harms done by removing plants from the wild — flytraps especially.

Because nature abhors a vacuum and Stanley seldom rested his garden was soon on the mend though not without periodic setbacks resulting from senseless poaching and vandalism. Today the Stanley Rehder Carnivorous Plant Garden in Alderman Park is a more secure place than ever with a conservation easement held by the North Carolina Coastal Land Trust and security infrastructure provided by the City of Wilmington.

With help from his many friends Stanley’s garden still thrives as a living legacy provided to our community by one man with a singular vision to protect a habitat to save a plant — our iconic and much beloved Venus flytrap.

Editor’s Note: The North Carolina General Assembly enacted legislation adding the Venus flytrap to the state’s endangered species list in 1985. It was named the official carnivorous plant of the State of North Carolina in 2005. After approximately 1 000 Venus flytrap plants were stolen from the Stanley Rehder Carnivorous Plant Garden in 2013 additional legislation signed into law in 2014 was introduced by New Hanover County Representative Ted Davis Jr. Poaching Venus flytraps is now a Class H felony.