The Flavor of North Carolina 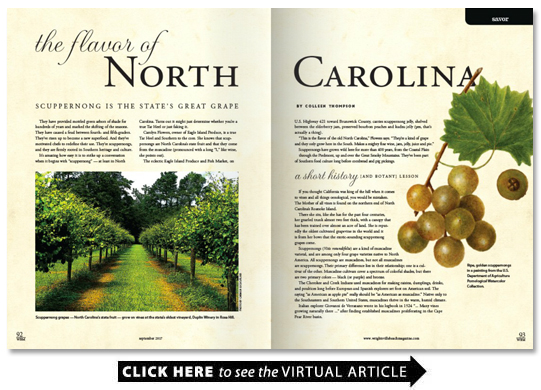 They have provided mottled green arbors of shade for hundreds of years and marked the shifting of the seasons. They have caused a feud between fourth- and fifth-graders. They’ve risen up to become a new superfood. And they’ve motivated chefs to redefine their use. They’re scuppernongs and they are firmly rooted in Southern heritage and culture.

It’s amazing how easy it is to strike up a conversation when it begins with “scuppernong” — at least in North Carolina. Turns out it might just determine whether you’re a true Tar Heel or just faking it.

Carolyn Flowers owner of Eagle Island Produce is a true Tar Heel and Southern to the core. She knows that scuppernongs are North Carolina’s state fruit and that they come from the muscadine (pronounced with a long “I ” like wine she points out).

“This is the flavor of the old North Carolina ” Flowers says. “They’re a kind of grape and they only grow here in the South. Makes a mighty fine wine jam jelly juice and pie.”

Scuppernongs have grown wild here for more than 400 years from the Coastal Plain through the Piedmont up and over the Great Smoky Mountains. They’ve been part of Southern food culture long before cornbread and pig pickings.

A Short History [and Botany] Lesson

If you thought California was king of the hill when it comes to vines and all things oenological you would be mistaken. The Mother of all vines is found on the northern end of North Carolina’s Roanoke Island.

There she sits like she has for the past four centuries her gnarled trunk almost two feet thick with a canopy that has been trained over almost an acre of land. She is reputedly the oldest cultivated grapevine in the world and it is from her bows that the exotic-sounding scuppernong grapes come.

Scuppernongs (Vitis rotundifolia) are a kind of muscadine varietal and are among only four grape varieties native to North America. All scuppernongs are muscadines but not all muscadines are scuppernongs. Their primary difference lies in their relationship; one is a cultivar of the other. Muscadine cultivars cover a spectrum of colorful shades but there are two primary colors — black (or purple) and bronze.

The Cherokee and Creek Indians used muscadines for making raisins dumplings drinks and poultices long before European and Spanish explorers set foot on American soil. The saying “as American as apple pie” really should be “as American as muscadine.” Native only to the Southeastern and Southern United States muscadines thrive in the warm humid climate.

Italian explorer Giovanni de Verrazano wrote in his logbook in 1524 “… Many vines growing naturally there …” after finding established muscadines proliferating in the Cape Fear River basin.

In the mid 1600s when explorers Philip Amadas and Arthur Barlowe serving under the direction of Sir Walter Raleigh landed on the banks of what is now Roanoke Island Barlowe was so taken by the number of muscadine vines and fruit he saw that he wrote to Raleigh extolling the fruitful land “… so full of grapes as the very beating and surge of the sea overflowed them … in all the world the like abundance is not to be found.”

The scuppernong became the first native American grape to be cultivated. It was named after the Scuppernong River which runs fromWashington County to the Albemarle Sound.

At first simply called the Big White Grape scuppernongs are the original variety of bronze muscadines that were discovered growing in the wild. Today even though improved bronze varieties such as Carlos and Magnolia have been developed for commercial plantings most people still refer to any bronze muscadines as scuppernongs.

‘Tis the season for muscadines — they are around for a short time from the end of August to October. Just when you think you can’t bear the heat for one more week the bronze and purple globes show up at markets promising the coming of fall.

In New York muscadines are referred to as “Swamp Grapes” or commonly called “slip-skin” grapes since a firm squeeze on a plump ripe muscadine causes the juicy seed-filled pulp to pop right out of its durable and sturdy skin.

A lot of growers consider them large berries — their size to use traditional Tar Heel parlance are “about that of a hog’s eye.” Scientifically speaking they are indeed berries but just happen to grow in grape-like loose clusters. The berries ripen individually within that cluster and are not synchronized like bunch grapes.

In 2001 the scuppernong was named the official North Carolina state fruit. The selection however was an extremely long and contentious process.

It began when a class of fourth-graders from Tommy’s Road Elementary School in Wayne County petitioned for the strawberry to become the official state fruit and won the backing of the North Carolina House of Representatives. However fourth- and fifth-graders from Manteo Elementary School in Dare County backed by Sen. Fountain Odom of Mecklenburg countered with a proposal to make the scuppernong grape the state fruit.

The Senate proposed a compromise making the scuppernong grape the state fruit and the blueberry and strawberry the state berries.

Muscadine grapes are among the most super of superfruits. They thrive in climates and conditions that would kill most European grapes. Muscadines naturally develop an extra chromosome (other grapes have 19 muscadines have 20) allowing the grapes to defend themselves in difficult growing conditions.

They proactively pass those fighting defensive capabilities on to the person eating the grapes in the form of antioxidants. These great American heirloom fruits have more antioxidants than the likes of a�ai berries mangosteens pomegranates and goji berries.

They also produce a special acid called ellagic acid recently shown to reduce fatty acid in the liver (a major cause of obesity). It’s also being studied for its anti-cancer and tumor-fighting abilities. The National Institute of Health (NIH) and the National Cancer Institute (NCI) found muscadine grapes inhibited the growth of prostate cancer cells.

Before the Civil War North Carolina ranked as the leading wine producer in the United States.Muscadine wine was so popular by the early 20th century that North Carolina enjoyed a reputation rivalling Napa Valley.

Today it’s estimated there are about 3 200 acres of muscadines planted throughout the Southeast mainly in Georgia North Carolina South Carolina Mississippi and Florida. Typically the wines are made in a sweet style making oenophiles scoff at the thought of sipping a muscadine wine.

Duplin Winery North Carolina’s oldest vineyard has started to see a shift in muscadine wine consumption. Co-owner Jonathan Fussell says there has been an increase in their wines on restaurant menus partly due to a revived interest in food and drink indigenous to a region.

In the true tradition of a Southern cook’s waste not want not ethos thrifty flavor-conscious cooks figured out a long time ago how to make use of every part of the fruit. They squeezed the pulp out of their skins into a bowl catching the juice and saving the thick skins (hulls). After discarding the big round seeds the pulp and hulls were cooked together and turned into jelly fermented into wine or simmered with sugar a bit of flour and butter to make a thick juicy lattice-topped hull pie.

Between the steps involved in preparation the shortness of their season and the challenges of finding these heirloom gems the pie has faded from its former glory of the first half of the 20th century when it was a staple in Southern kitchens. Scuppernong hull pie recipes are Southern relics of a forgotten time these days passed down like treasures.

Nancie McDermott author of “Southern Pies ” grew up spitting out hulls in her grandparents’ arbor.

“I cherish scuppernongs. I like the frugality and respect for ingredients ” she says. But she admits making a pie is quite a production.

When they’re cooked scuppernongs have a sweet and tart flavor bursting with tones of honeysuckle wildflower and orange blossom. American chefs are rediscovering their ancient charms and creating a new identity for them with modern sensibilities in both savory and sweet dishes.

“The skin holds its shape but loses its chewy brawn and the flesh becomes the jammy essence of muscadine ” says chef Vivian Howard author of “Deep Run Roots.” “If the seeds weren’t such a pain to extract I’d probably put roasted muscadines on everything from ice cream to steak.”

Chef Hugh Acheson of Five & Ten in Athens Georgia roasts whole scuppernongs that he serves with veal. Karen Barker the pastry chef at the Magnolia Grill in Durham cooks muscadines with honey and a touch of orange juice to make a muscadine syrup that she serves with poached Seckel pears.Chef Jason Scott of Island Grille in Atlantic Beach does a historic rendition of a lemon custard pie integrating sweetened muscadine grapes and whipped goat cheese.

There is something quietly reassuring when scuppernongs arrive each fall without fail just as they have for centuries. They are reminder to pay attention to the ebb and flow of the seasons and celebrate their arrival.

In our modern world of seedless easy-to-peel fruits scuppernongs and muscadines with their thick skin and profusion of seeds straddle that growing divide between tradition and convenience. But they’ve managed to stay right here at home alive and well and part of that inseparable foodconnection to Southern culture.