The Fanny and Jenny and Her Legendary Sword 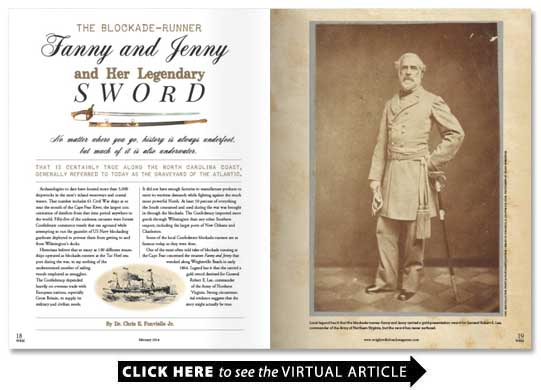 No matter where you go history is always underfoot but much of it is also underwater.

That is certainly true along the North Carolina coast generally referred to today as the Graveyard of the Atlantic.

Archaeologists to date have located more than 5 000 shipwrecks in the state s inland waterways and coastal waters. That number includes 61 Civil War ships at or near the mouth of the Cape Fear River the largest concentration of derelicts from that time period anywhere in the world. Fifty-five of the undersea carcasses were former Confederate commerce vessels that ran aground while attempting to run the gauntlet of US Navy blockading gunboats deployed to prevent them from getting to and from Wilmington s docks.

Historians believe that as many as 100 different steamships operated as blockade-runners at the Tar Heel seaport during the war to say nothing of the undetermined number of sailing vessels employed as smugglers. The Confederacy depended heavily on overseas trade with European nations especially Great Britain to supply its military and civilian needs. It did not have enough factories to manufacture products to meet its wartime demands while fighting against the much more powerful North. At least 50 percent of everything the South consumed and used during the war was brought in through the blockade. The Confederacy imported more goods through Wilmington than any other Southern seaport including the larger ports of New Orleans and Charleston.

Some of the local Confederate blockade-runners are as famous today as they were then.

One of the most often told tales of blockade running at the Cape Fear concerned the steamer Fanny and Jenny that wrecked along Wrightsville Beach in early 1864. Legend has it that she carried a gold sword destined for General Robert E. Lee commander of the Army of Northern Virginia. Strong circumstantial evidence suggests that the story might actually be true.

The Fanny and Jenny began her blockade running career as the Scotia. Built by Wigram and Company of Blackwall England in 1847 the 727-ton side-wheel steamer measured 202 feet in length 28 feet in width with a 14-foot-deep cargo hold. Lured by the potential for huge profits from smuggling goods into the Confederacy the importing and exporting firm Leechwood Harrison and Forwood of Liverpool England purchased the Scotia in December 1861 for about $165 000 in today s money. She made two trips through the blockade before being captured by the USS Restless while trying to pierce the blockade of Charleston South Carolina on October 24 1862.

Private interests purchased the Scotia at a northern prize court auction and returned her to the blockade running trade under a rechristened name the Fanny and Jenny. Unfortunately for her investors the Fanny and Jenny wrecked on her first voyage to the last major port on the Atlantic seaboard still accessible to Confederate trade Wilmington North Carolina.

Blockade running at Wilmington became more difficult as the US Navy focused more resources and effort on stopping the illegal maritime trade there. The capture of smugglers occurred more frequently by 1864. Wrightsville Beach became a graveyard for three blockade-runners in early February of that year. All of them Fanny and Jenny Dee and Emily also known as Emily of London wrecked near the south end.

The Dee out of Hamilton Bermuda ran aground on the night of February 5 only to be discovered and destroyed the following morning by the USS Cambridge. Three nights later the Emily also running out of the British transshipment point of Bermuda beached about 300 yards north of the Dee. Strangely the blockade-runner Fanny and Jenny sailing from Nassau also accidentally ran aground near Masonboro Inlet within sight of the other two grounded ships on the night of February 9 1864.

The USS Florida spotted the two new ships at dawn the following morning. Commander Pierce Crosby sent boats to take possession of them. Blue-clad sailors reached the Fanny and Jenny in time to seize 25 crewmen charts and a Confederate flag. The Fanny and Jenny s famous pilot Thomas Edwards Burriss of Smithville (now Southport) North Carolina managed to escape capture but the ship s captain and a paymaster both drowned while trying to make it ashore through the heavy surf.

Some accounts claim that the captain was none other than Louis M. Coxetter whom the US Navy considered a notorious privateer and blockade-runner. Maybe so but he enjoyed a long and prosperous career as a Confederate sea captain. Commander Crosby of the Florida later reported however that the captain of the Fanny and Jenny may not have been the Coxetter one of the US Navy Department s most wanted men but a nephew.

The Fanny and Jenny s cargo reportedly comprised only a  few small articles of merchandise and a good deal of coal   but one of her engineers informed Commander Crosby that  there was a handsome sword gold mounted for General Robert E. Lee on board. It was destroyed with the vessel; it was a presentation sword.  Crosby mentioned it in his official report about the sinking of the Fanny and Jenny to Admiral S. Philips Lee commander of the North Atlantic Blockading Squadron. William F. Keeler a paymaster on the USS Florida wrote to his wife:  One of the engineers which we took from the Fanny & Jenny told us there was a splendid sword on board sent by some English noblemen to Gen. Lee at a cost of $2500.  (Approximately $42 000 today.)  He told us that as soon as the vessel was beached the Capt. ordered his boat lowered went into his cabin & got the sword. In attempting to get into the boat he lost the sword overboard & the boat was soon after swamped & every one in her lost most of them were officers of the vessel.

The bodies had been pushed onto the beach by the waves or were still rolling about in the surf when Union sailors approached the stranded blockade-runner.

The Florida now assisted by the Cambridge hoped to save both the Fanny and Jenny and the Emily by pulling them off the beach. When such operations proved successful the US Navy often purchased the blockade-runners and converted them into speedy cruisers to chase after other blockade-runners. About the time sailors attached hawsers however Confederate sharpshooters and a Whitworth rifle-cannon began firing at them from behind nearby sand dunes. The Union sailors quickly retreated to their vessels having only enough time to set the Fanny and Jenny and the Emily on fire. As the Confederate small arms and cannon fire increased the Florida and the Cambridge steamed further offshore. From there they watched the stranded blockade-runners burn and the ships soon became a total loss.

The story of the Fanny and Jenny and her gold sword for General Lee began 150 years ago. Cape Fear chronicler Louis T. Moore wrote about it in Stories Old and New of the Cape Fear Region first published in 1956. Moore found no evidence in England of the existence of the fabled sword. But the legend refuses to die. The blockade-runner s watery grave too is a point of debate.

Many believe the Fanny and Jenny is buried deep beneath the ocean sands about 200 yards east of Crystal Pier. Professional historians and archaeologists claim otherwise. Billy Ray Morris a Wrightsville Beach native director of North Carolina s Underwater Archaeology program headquartered at the Fort Fisher State Historic Site says that the Fanny and Jenny s final resting place is about 300 yards offshore just north of the rock jetty at Masonboro Inlet. Morris dived on the shipwreck in his boyhood days and was told by local veteran divers that it was the Fanny and Jenny. Archaeologists have since pinpointed three wrecks along Wrightsville Beach s south end they believe are the former blockade-runners the Fanny and Jenny Dee and Emily. The historical record supports that disposition. Writing to his wife on March 3 1864 William Keeler said that he and his comrades on the USS Florida  could see the wreck of the Dee 300 yards above the Fanny & Jenny [and] the Emily beached about 300 yards above the Dee.

Even if the southernmost blockade-runner wreck at Wrightsville Beach is indeed the Fanny and Jenny what about the legendary sword? Is it still on board the ship or buried nearby? Perhaps Billy Ray Morris said it best:  That sword is the Holy Grail of blockade running at Wilmington during the Civil War.

Chris E. Fonvielle Jr. is an assistant professor in the Department of History at the University of North Carolina Wilmington. His new book is Faces of Fort Fisher 1861-1864.