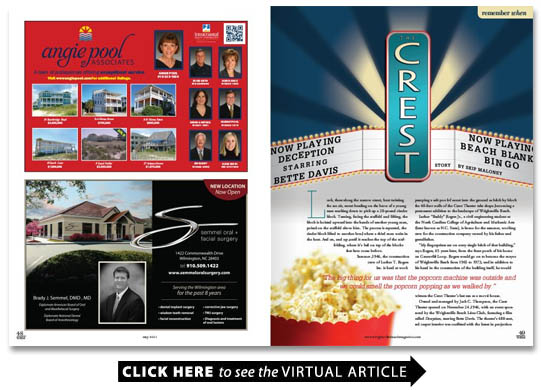 Look there along the narrow street heat twisting the sea air sweat beading on the brow of a young man reaching down to pick up a 20-pound cinder block. Turning facing the scaffold and lifting the block is hoisted upward into the hands of another young man poised on the scaffold above him. The process is repeated the cinder block lifted to another level where a third man waits in the heat. And on and up until it reaches the top of the scaffolding where its laid on top of the blocks that have come before.

Summer 1946 the construction crew of Luther T. Rogers Inc. is hard at work pumping a salt pool of sweat into the ground as block by block the 40-foot walls of the Crest Theater take shape becoming a permanent addition to the landscape of Wrightsville Beach.

Luther “Buddy” Rogers Jr. a civil engineering student at the North Carolina College of Agriculture and Mechanic Arts (later known as N.C. State) is home for the summer working crew for the construction company owned by his father and grandfather.

“My fingerprints are on every single block of that building ” says Rogers 65 years later from the front porch of his home on Greenville Loop. Rogers would go on to become the mayor of Wrightsville Beach from 1965 to 1973 and in addition to his hand in the construction of the building itself he would witness the Crest Theaters last run as a movie house.

Owned and managed by Jack C. Thompson the Crest Theater opened on November 24 1946 with an event sponsored by the Wrightsville Beach Lions Club featuring a film called Deception starring Bette Davis. The theaters 488-seat red carpet interior was outfitted with the latest in projection and audio equipment the first of its kind in the area. Like most establishments at the time the movie house was segregated; white patrons entered through doors that led to the theaters orchestra seats black patrons entered through a separate door that led to the balcony.

“The big thing for us ” says Sandy Powell who grew up in downtown Wrightsville Beach “was that the popcorn machine was outside and we could smell the popcorn popping as we walked by.”

For the Boltons the Crest Theater was a family affair. “Jack Thompson was a family friend ” recalls Lynn Hartwick from her Marion South Carolina home. “My grandfather James Brunson Bolton was the janitor and Id go with him every morning to clean the theater up from the night before. My Mom the late Helen Bolton Nettles worked there at night as a ticket cashier. Before I was old enough to help ” Hartwick says “my grandfather would stroll me down to Newells for ice cream and I would wave at my Mom at the cashier window.”

Like the aroma of freshly popped corn some movie memories also linger.

“I do remember old films such as The Alamo (1960) ” Hartwick says “and all the Frankie and Annette (Avalon and Funicello) beach classics.” There were four beginning with the 1963 Beach Party and ending with Beach Blanket Bingo in 1965.

It was about that time that the Crest started to show foreign films by such notable directors as Federico Fellini Michelangelo Antonioni and Ingmar Bergman. Showing too were nefarious flicks not considered suitable to a family beach though its hard to know at exactly what point and over which movie the Crest began to test the limits of community acceptance. But it was clear from the outset that X-rated films were not going to fly on Wrightsville.

“There was a lot of discussion about it ” Rogers says. “I dont know exactly how we were appointed to go and see one of these movies but we went.” In this official capacity as mayor he found himself seated between two women watching (what was then) a XXX-rated movie. “I had to get up and leave ” he says. “I think three or four of us got up and left. (The Crest) was on its way out when we went ” he adds. “It was closed down shortly after that.”

By the time Rogers concluded his tenure as mayor the building had been sold and remodeled into an arcadeequipped with pool tables foosball air hockey and a small grillwith an upstairs lounge. The arcade was managed by Dave West.

Born six years after the Crest opened West attended Wrightsville Beach School and until he moved away to attend junior and senior high school and ultimately college in Chapel Hill in the early 60s he had been one of the Crest Theaters regular patrons.

“There were probably only around 200 year-round residents at the time ” West recalls “and this was a bunch of kids that had all grown up together. I dont remember the movies that much ” he adds “but I do remember that Tuesday night was foreign film night and I remember Never on Sunday (1960) showing there.”

West who graduated college in 1973 was offered a job running the place beginning a nearly decade-long chapter in the Crests history as a concert hall. “The stage ” West says “was still there and theyd extended the balcony to include wings to either side. It became a rock n roll night club and started featuring local bands and traveling acts.”

“The Crest drew people from everywhere ” Powell says. “It was a unique center for live music. We not only played there but we rehearsed there too during the day.” Many bands showed films as a backdrop to their music.

Along with the patrons of neighboring bars crowds spilled onto North Lumina at closing time. In the wee hours noise levels increased residents complained and the local police stepped up enforcement.

“They started cracking down on the whole club scene ” West says “and drunk driving particularly. They had a noise ordinance passed that said the noise had to stop at 1 a.m.”

“Gradually ” West adds “that kind of enforcement kept people from coming to the places.” In May 1981 the Crest was sold to the town which according to a report in the Wilmington Morning Star “spent about $160 000 with the intent of closing the bar and keeping the building from ever being used as a bar again.” There was some thought given to turning the building into a combination community center and town hall but those thoughts were scrapped when the town faced possible renovation costs of $130 000. Harper Peterson proposed plans that would return the building to its original use as a theater but when those plans fell through aldermen began discussions centered on tearing the building down for a parking lot. Two years later in a unanimous decision the town sold the building to Johnny and Estelle Baker owners of the Bridge Tender Restaurant who proposed plans for a fitness center and health food restaurant.

“It was in deplorable shape ” Estelle recalls from her Airlie Road gift shop The Fishermans Wife. “We basically gutted it. The initial idea was to turn it into a fitness center. Wed inherited some fitness equipment and hired an architect to design (the interior).”

“The front was going to be a health food restaurant ” she adds noting with a wry grin that the restaurant didnt fare as well as expected because she says “skinny people dont eat.”

The fitness club got off the ground run by John Poole from the towns Parks and Recreation Department. During the ensuing decade the buildings storefront was leased to a variety of businesses including a florist and at one time a delicatessen that was an extension of Roberts Market next door. In 1995 Jerry Allen Lachman leased the space and opened Jerry Allens Sports Bar and Grill. More than 15 years later Jerry Allens thrives.

In October 2002 the Bakers leased the remainder of the buildings square footage to Nick and Wanda Kentrolis who opened The Crest Fitness; and in 2004 the Bakers sold the building to Lachman and business partner Allan Middleton. In 2006 after The Crest Fitness moved to the Galleria on Wrightsville Avenue and after a brief time of vacancy the upper floor became the walk-up gallery showroom and studio for Adamantine Art. And since 2008 Evolution a mixed martial arts studio has occupied the former balcony.

Look there along the narrow street heat twists in the summery air. Behind the buttery-yellow faade what was once the Crest Theater stands as a stubborn remnant of the Wrightsville Beach townscape. Faded memories of the movie palace in its heyday unravel in the conscious collective and for those who fondly remember a faint aroma of popping corn still drifts with the sea breeze.