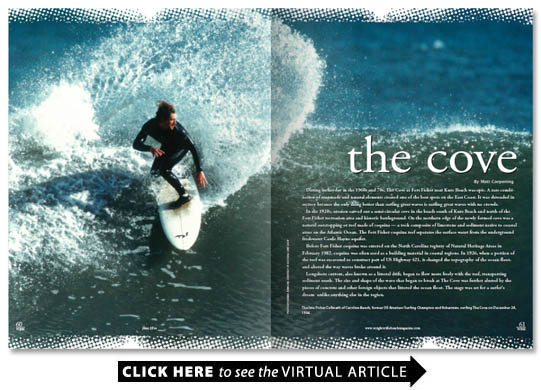 During its heyday in the 1960s and 70s The Cove at Fort Fisher near Kure Beach was epic. A rare combination of manmade and natural elements created one of the best spots on the East Coast. It was shrouded in secrecy because the only thing better than surfing great waves is surfing great waves with no crowds.

In the 1920s erosion carved out a semi-circular cove in the beach south of Kure Beach and north of the Fort Fisher recreation area and historic battleground. On the northern edge of the newly formed cove was a natural outcropping or reef made of coquina — a rock composite of limestone and sediment native to coastal areas on the Atlantic Ocean. The Fort Fisher coquina reef separates the surface water from the underground freshwater Castle Hayne aquifer.

Before Fort Fisher coquina was entered on the North Carolina registry of Natural Heritage Areas in February 1982 coquina was often used as a building material in coastal regions. In 1926 when a portion of the reef was excavated to construct part of US Highway 421 it changed the topography of the ocean floor and altered the way waves broke around it.

Longshore current also known as a littoral drift began to flow more freely with the reef transporting sediment south. The size and shape of the wave that began to break at The Cove was further altered by the pieces of concrete and other foreign objects that littered the ocean floor. The stage was set for a surfer s dream  unlike anything else in the region.

Conditions were best at The Cove when a northeasterly swell hit because it would wrap around the coquina reef and break six to eight feet for 15-20 seconds all the way to the southern boulders earning the nickname Rincon East. The famed surf spot at Rincon California is also a very long point break set in a cove.

When we were 12 years old we would haul out to The Cove from Wrightsville Beach. Nobody went to Masonboro back then except in summer recalls Bill Curry East Coast Hall of Fame surfer and Wrightsville Beach resident. We would load up in the car and go down and catch The Cove. That s just a memory that I cherish because you could catch some really really good waves there. The swell was coming out of the northeast and it was kind of like the point break.

Fort Fisher was a remote spot and not many people traveled that far south. Even the group of surfing pioneers only ventured there on their bravest days. After surfing the tamer beach breaks in Carolina Beach they would work their way south to a spot called Stubs — so named for the presence of pier pilings — and eventually to The Cove.

In 1960 the Fort Fisher State Historic Site museum was built and Fort Fisher became a historic attraction. Boulders were placed around the edges of The Cove to prevent further erosion. In the mid-1960s there was a dirt road that led to the beach.

During the same period of time Robert E. Harrill also known as the Fort Fisher Hermit lived in a derelict bunker at the former Confederate outpost. Harrill escaped a troubled childhood and unfortunate life circumstances by leaving the mountains of North Carolina to pursue a Thoreau-inspired life at the beach. Instead his lifestyle became the subject of public curiosity rather than one of solitude. The historic site and the hermit brought the area more attention than ever before. Waves of surfers began to notice the long tubular uniquely left-breaking point reef.

News of The Cove spread among the counterculture.

Fast forward to 1967. Native son and legendary surfer Will Allison charges down the line of a seven-foot left-breaking wave that s break-�ing fast. He drags his left hand in the face of the wave to slow down just enough to crouch into the tube sneaking up behind him. All he sees is green.

That left point really stuck out. It was a really big cove. The trees grew right up to the inside of the cove there. Oak trees Allison recalls. When we got a north swell that was the best direction. Generally we were there when there was a big nor easter blowing. The best type of condition was a hurricane that went by just north of us. Wrightsville Beach and all those places would close out. But you could get farther outside at the point and you could ride all the way from the coquina reef to the Civil War monument there.

Back to 1967. Allison is goofy-footed and he has his weight on his back foot to stall his speed. From deep in the pit he can see light and he s got to make it out before he gets to the boulders. With a lean forward and a cross step he feels the tube close around him. It spits him out along with a stream of salt spray before his single fin and a protruding rusty metal scrap meet unceremoniously. Submerged four feet below the surface of what seems like a macrocosmic washing machine he swims for the surface while his board clangs on the southern boulders acquiring several dings that will later serve as battle scars.

No one who surfed The Cove on a regular basis came out of the water unscathed. If the coquina rocks did not get you the southern boulders did. The more northerly the great sea swell the better the surfing conditions as the wave crossed the rock reef. The left faces were unusually long well-shaped point break waves and I got my share of tube rapture there recalls surfer and surf historian Joe Skipper Funderburg.

Funderburg is near the nose of his custom New Hanover High School Wildcat orange nine-foot six-inch Lank Lancaster East Coast surfboard. He takes a step back and adopts a sturdy stance as the wave breaks. As whitewater engulfs his board he flops down to his belly and avoiding the approaching boulders he makes landfall.

The locals were pretty cool so when the fast left-breaking barrels came together at the point we all got more than our share of tube riding Funderburg recalls. The hollow waves at The Cove gave locals long barreling rides well into the 1970s when a revolution in surfing took place. As faster more nimble shortboards eclipsed longboards the old school logs moved aside and faded from popularity; so too did The Cove.

Environmental changes that may have contributed to The Cove s decline are unknown but it is clear that the wave is no longer the same. There is speculation that an anti-erosion project in 1970 could have diminished the integrity of the surf zone. However due to a surfer being on the engineering team which opted to place additional boulders around it The Cove is still rideable on the right swell today.

Photos courtesy of SlapDash Publishing are from Surfing on the Cape Fear Coast by Joseph Skipper Funderburg who will sign copies of his book at Barnes & Noble Booksellers 4-7 pm July 3 at Mayfaire Town Center Wilmington North Carolina.