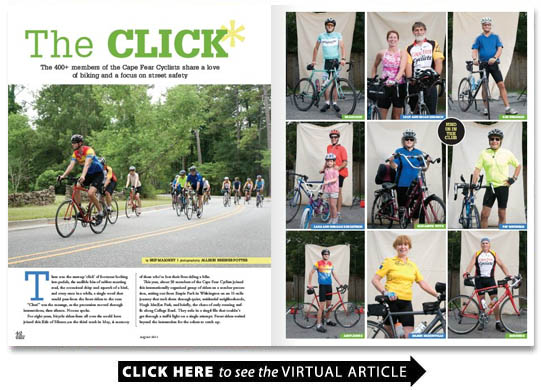 There was the start-up click of footwear locking into pedals the audible hiss of rubber meeting road the occasional chirp and squawk of a bird and every once in a while a single word that would pass from the front riders to the rear.

“Clear!” was the message as the procession moved through intersections then silence. No one spoke.

For eight years bicycle riders from all over the world have joined this Ride of Silence on the third week in May in memory of those whove lost their lives riding a bike.

This year about 50 members of the Cape Fear Cyclists joined this internationally organized group of riders on a somber procession setting out from Empie Park in Wilmington on an 11-mile journey that took them through quiet residential neighborhoods Hugh MacRae Park and briefly the chaos of early evening traffic along College Road. They rode in a single file that couldnt get through a traffic light on a single attempt. Front riders waited beyond the intersection for the others to catch up.

A month earlier this group rode in memorial of the Doolittle family which lost a father and son David and Trey to an impaired driver along River Road earlier this year.

Once a week on Wednesday evenings the Cape Fear Cyclists gather in the parking lot of Flaming Amys Burrito Barn at the intersection of 41st Street and Oleander Drive from about 6 to 7:30 p.m. The group then winds its way through residential neighborhoods toward Greenfield Lake where it makes the 4.7-mile loop around and then heads back to Flaming Amys.

On this and every other CFC ride there are generally at least three pace groups: the Need for Speed crowd that sets a blistering pace above 20 mph; followed by a Middle of the Road group riding between 17 and 20 mph; and bringing up the rear is a Fun in the Sun group riding at 14 to 17 mph. The riders regroup at convenient points along the route and emphasize ahead of time that no one is left behind.

The route sends riders around the lake and after completing the circle it approaches a lakeside parking lot. By the time the Fun in the Sun group arrives at this parking lot for the first time the speedy elite have been around the lake two or even three times for those intent on pushing their personal speed envelope in pursuit of a serious workout. True to their word the group waits until everyones pulled in before remounting and heading back to Flaming Amys to refuel. At the differing rates of speed everybody has a good time.

One of the people youll meet is Elizabeth Pitts a regular Fun in the Sun rider. Shes easy to spot on her semi-recumbent bike with a wide seat and a firm cushion at her back. The design of the bike allows her to lean back when climbing hills or more likely in this area pedaling into a stiff wind.

“I had it modified ” she says of her bike “by putting narrower tires and disc brakes on it.” Though she dabbled with biking back in the mid-1970s when her sons were intent on earning Boy Scout merit badges for the activity she started getting into cycling more seriously about three years ago.

“I started riding when I was 60 ” she explains. “I had some health issues and I wanted to clear them up without a lot of medicine.”

At the literal heart of her health issues was a problem with weight; one that in the three years that have since passed she has by anyones definition addressed satisfactorily.

Another club member you might find in this rear echelon of riders although he does get himself into the middle of the pack now and again is 71-year-old Al Schroetel chairman of the CFC Advocacy Committee and assistant secretary to the membership committee. Schroetels been riding all his life back to the days in the 1940s when hed ride his bike to school in Falmouth Maine.

“Always ridden ” Schroetel says. “Never stopped. In college I didnt have enough money for a car so I rode.”

Schroetel came to Wilmington in 1963 where he “fell in love with the bursar at Wilmington College and married her.” Bike riding in and around Wilmington at the time was a lot less hazardous than it is today and his awareness of the differences informs his presence on both the clubs advocacy committee as well as the board of a statewide advocacy group.

Pitts and Schroetel are just two of more than 400 members of the Cape Fear Cyclists club who not only head out on the road on a regular basis to enjoy themselves but take the time and make the effort to highlight bicycle safety while advocating for local and state legislation to make the roads they travel safe for everybody.

“It started out as a riding club ” says Jim Mincher owner of Two Wheeler Dealer and member since about 1974 “and then it sort of died down and came back to life with racers. And then they got to doing something else.”

“(The club) is stronger now than ever ” Mincher adds “(with an emphasis) on touring fitness and advocacy the government end of it.”

Recently in the fall of 2009 a mountain bike contingent of the group organized a club of its own The Cape Fear Southern Off-Road Bicycle Association aligning itself with the International Mountain Bike Association. CFC has also developed an ongoing relationship with the University of North Carolina Wilmingtons Cycling Club whose members join them for regularly scheduled rides and help to organize cycling information booths at UNCW fairs.

By its very nature the CFC is a social group and as noted in its mission statement was formed to bring together individuals having a common interest in biking. The advocacy component of the group however designed to promote public recognition of the need for safer cycling and to offer guidance and instruction in safe cycling operation has become a matter of life or death.

While biking is generally acknowledged to be beneficial to ones health and environmentally friendly that message is often obscured in a social setting that places a premium on getting somewhere fast and doing so in ignorance of laws which protect a cyclists right to be on the road.

“Its a question of understanding the bikes right to be there ” says current CFC president Craig Mann. “Theres an education effort that needs to be put out there (to motorists) to share the road.”

“Drivers ” he adds “dont understand this and youre going to find people taking great pleasure in seeing if they can scare you.”

Four-year CFC member Mike Kirkbride who represents Carolina Beach with the Wilmington Area Municipal Planning Organization has seen a decided upswing in not only the level of local advocacy for bicycle safety but North Carolinas response as well.

“Heres the thing ” Kirkbride says “(CFC) especially with its new president Craig Mann has become much more of an advocacy group in recent years. It takes so much patience and drive that you almost have to be really serious about it.”

It is as most members of the group will tell you about a combination of issues not just about rude drivers or uncooperative legislators. And as noted earlier by Mann its a question of understanding with general awareness being the sharpest arrow in the quiver of that understanding.

“I think the thing that Ive seen thats been the most helpful ” Kirkbride says “has been just the holding of the vision knowing how it could be and then raising peoples awareness to see that vision.”

“Were getting a lot more flexibility from the Department of Transportation now ” Kirkbride adds. “Its this collaborative vision thats gotten them at least thinking and whats made the difference has been so many people from so many angles holding that vision and maintaining it. The Cape Fear Cyclists have been awesome to work with in this regard. Theyve been the rock of the biking community here for so many years.”

And thanks in part to their tireless efforts the League of American Bicyclists in May during National Bike Month designated the city of Wilmington (and seven others in North Carolina including Chapel Hill Durham and Greensboro) as a Bicycle Friendly Community an award given to cities that have according to the league demonstrated a significant commitment to bicycling showcasing the ongoing development of the Gary Shell Cross-City Trail and the River to Sea Bikeway.