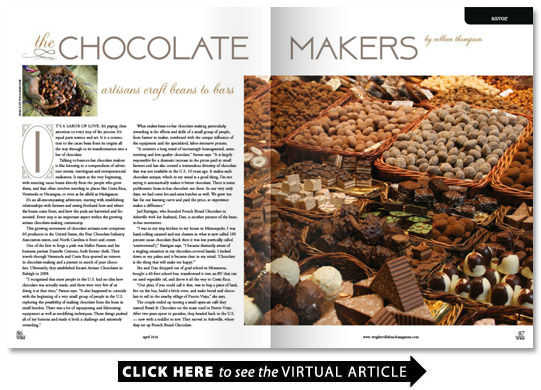 It’s a labor of love. It’s paying close attention to every step of the process. It’s equal parts science and art. It is a connection to the cacao bean from its origins all the way through to its transformation into a bar of chocolate.

Talking to bean-to-bar chocolate makers is like listening to a compendium of adventure stories travelogues and entrepreneurial endeavors. It starts at the very beginning with sourcing cacao beans directly from the people who grow them and that often involves traveling to places like Costa Rica Venezuela or Nicaragua or even as far afield as Madagascar.

It’s an all-encompassing adventure starting with establishing relationships with farmers and seeing firsthand how and where the beans come from and how the pods are harvested and fermented. Every step is an important aspect within the growing artisan chocolate-making community.

This growing movement of chocolate artisans now comprises 60 producers in the United States the Fine Chocolate Industry Association states and North Carolina is front and center.

One of the first to forge a path was Hallot Parson and his business partner Danielle Centeno both former chefs. Their travels through Venezuela and Costa Rica spurred an interest in chocolate-making and a pursuit in search of pure chocolate. Ultimately they established Escaz� Artisan Chocolates in Raleigh in 2008.

“I recognized that most people in the U.S. had no idea how chocolate was actually made and there were very few of us doing it at that time ” Parson says. “It also happened to coincide with the beginning of a very small group of people in the U.S. exploring the possibility of making chocolate from the bean in small batches. There was a lot of repurposing and fabricating equipment as well as modifying techniques. Those things pushed all of my buttons and made it both a challenge and extremely rewarding.”

What makes bean-to-bar chocolate-making particularly rewarding is the efforts and skills of a small group of people from farmer to maker combined with the unique influence of the equipment and the specialized labor-intensive process.

“It counters a long trend of increasingly homogenized uninteresting and low-quality chocolate ” Parson says. “It is largely responsible for a dramatic increase in the prices paid to small farmers and has also created a tremendous diversity of chocolate that was not available in the U.S. 10 years ago. It makes each chocolate unique which in my mind is a good thing. I’m not saying it automatically makes it better chocolate. There is some problematic bean-to-bar chocolate out there. In our very early days we had some hit-and-miss batches as well. We grew too fast for our learning curve and paid the price so experience makes a difference.”

Jael Rattigan who founded French Broad Chocolate in Asheville with her husband Dan is another pioneer of the bean-to-bar movement.

“I was in my tiny kitchen in my house in Minneapolis. I was hand-rolling caramel and nut clusters in what is now called 100 percent cacao chocolate (back then it was less poetically called ‘unsweetened’) ” Rattigan says. “I became distinctly aware of a tingling sensation in my chocolate-covered hands. I looked down at my palms and it became clear in my mind. ‘Chocolate is the thing that will make me happy.'”

She and Dan dropped out of grad school in Minnesota bought a 40-foot school bus transformed it into an RV that ran on used vegetable oil and drove it all the way to Costa Rica.

“Our plan if you could call it that was to buy a piece of land live on the bus build a brick oven and make bread and chocolate to sell in the nearby village of Puerto Viejo ” she says.

The couple ended up renting a small open-air caf� they named Bread & Chocolate on the main road in Puerto Viejo. After two years spent in paradise they headed back to the U.S. — now with a toddler in tow. They moved to Asheville where they set up French Broad Chocolate.

“I view bean-to-bar chocolate as a part of a whole artisan approach to food ” she says. “It’s making a distinctive product with the discernment of a human mind and human hands. If I buy something labeled artisan I expect a certain level of quality and integrity in the ingredients and care in the process. It’s the opposite of industrial mass-produced overly processed food. It’s got more heart.”

Rattigan believes the people who become connoisseurs of bean-to-bar chocolate are people who care about the source of their food.

“Chocolate passes through so many hands from the farmers who plant and harvest it to the people who ferment and dry it export it and that’s all before it enters the maker’s hands ” she says. “We try and tell the story of our chocolate which includes our own story but also the story of those amazing partnerships with cacao farmers. It’s all about human connection.”

For Brent Peters of Black Mountain Chocolate in Winston-Salem the appeal of starting a bean-to-bar business was all about the craft.

“My business training is as a lawyer ” he says. “Lawyering is a thinking job that happens mostly in the head. With chocolate I get to work with my hands and even eat the fruits of my labor. I define craft as applying individual skill art and love to create something useful. Automation technology and mass production have their place in modern society but we need to cling to craft as an antidote. Like the quote by John Ruskin: ‘The highest reward for a person’s toil is not what he gets for it but what he becomes by it.'”

Any bean-to-bar maker will say what differentiates their product from regular chocolate comes down to three important things: the type of cocoa beans the source of the beans and the process of turning the beans into chocolate. Basically it’s all about the beans.

The quality of the bean impacts the price of the chocolate.

“We pay more than twice as much for our heirloom cocoa beans (compared to the big makers using generic beans) ” Peters says. “Why? Flavor and fairness. Criollo beans have a very desirable ‘fruity’ taste. But Criollo beans are harder to grow and therefore rare. They make up less than 4 percent of all the cacao grown around the globe each year.”

One of the advantages of making chocolate from the same variety of cacao grown in the same region is the chance to experience the changes over time. Each harvest or vintage is unique depending on the conditions in the field that growing season. Beans from the different farms will also vary based on the locations of the trees and the post-harvest processing methods used.

The quality of the cacao is closely related to the genetics of the bean. For example in Venezuela which has a rich history and diversity of cacao the growing areas can be very isolated from each other.

This keeps the genetics unique and the flavors entirely different from region to region ” Parson says.

The notion of terroir — soil quality micro-organisms growing conditions and climate — that give rise to a regional flavor is something that Jael and Dan Rattigan know a thing or two about. They have worked with agronomists in Nicaragua protecting heirloom varietals from the brink of extinction; with a producer in the village of Rocja Pontila Guatemala; and with an indigenous community in Peru all in search of a “taste of place.”

We like to think of terroir as more than just an agglomeration of weather and soil ” she says. “We regard terroir as the unique aspects of a place that influence and shape the products grown and made there. This could include native plants influencing the soil what local wood the ferment boxes are made from or the leaves they use to cover them and what methods are traditional for fermentation and drying. Those last two have a really big influence.”

From Peru to Venezuela the cacao bean is the star of the show that is ultimately crafted into its finest expression in the form of a chocolate bar. Each artisan therefore has a favorite.

For Parson it’s Escaz�’s “Piaroa 73 percent” — a wild harvested cacao that is picked by the indigenous people of the Amazon and then rowed by canoe for two days to an area where it can ferment and dry. For Jael Rattigan it’s French Broad Chocolate’s 53 percent dark milk chocolate made from Brazilian cacao. And Brent Peters satisfies his Southern sweet tooth with his Black Mountain Milk bar made with goat’s milk.

With its focus on quality ethical sourcing and pure intense flavors bean-to-bar chocolate is drawing fans the same way artisanal coffee and craft beer have. It’s still a tiny part of the nation’s $17.7 billion chocolate industry but artisanal chocolate makers intend to change our appreciation and attention to quality one tasty bar at a time.