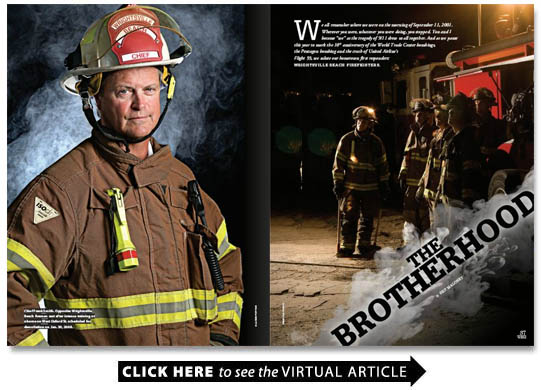 We all remember where we were on the morning of September 11 2001. Wherever you were whatever you were doing you stopped. You and I became “we” as the tragedy of 9/11 drew us all together. And as we pause this year to mark the 10th anniversary of the World Trade Center bombings the Pentagon bombing and the crash of United Airlines Flight 93 we salute our hometown first responders: Wrightsville Beach firefighters.

There have been many changes to the Wrightsville Beach Fire Department since it was formed in the early part of the last century. Its evolved from an on-call volunteer group that employeed carts bucket brigades and existing water pipes (no fire hydrants) to battle the Great Fire of 1934 into a combination professional and volunteer force that can respond in minutes with three fire trucks capable of pumping 4 000 gallons of water onto a fire in one minute. Technology like thermal imaging cameras has significantly improved the departments ability to extinguish a fire while protective gear and use of self-contained breathing apparatus as an example have improved the departments ability to protect the men and women putting that fire out.

The changes though are not all about the equipment or even the new state-of-the-art public safety facility on Bob Sawyer Drive which has just been occupied since September 2010. It is also about the force itself and the men and women wielding that equipment in almost daily attempts to keep the residents of Wrightsville Beach safe from a variety of natural and man-made disasters.

Captain Sterling Powell whos been with the department since 1982 says one of the more significant changes has involved the process of becoming a firefighter. In the departments early all-volunteer days that process was simple and swift.

“You were introduced one week ” Powell says “and in the second week you were handed your gear and told to be careful.”

“Now ” he adds “it involves about four months of training and at every level of certification there are continuing education requirements about 36 hours per year or more.”

In addition every member of the department has to attend at least 24 training drills every year.

Some things though do not change; there has always been and will always be a special bond among those who serve. Shared by members of the armed forces and law enforcement officers this bond generally referred to as a “brotherhood ” is forged in an atmosphere of potential danger awesome responsibility and a need to know that the man or woman working next to you has your back; that you in turn have his or hers. In the early days this bond was as much social as it was professional because the man or woman next to you was often your neighbor.

“When I joined it was all volunteer ” Powell says “and everyone lived on the beach. They were businessmen tradesmen and it was a community service thing a need of the community.”

One of the advantages of this all-volunteer force Powell says was a diversity of backgrounds which would often bring unexpected tools to bear in emergency situations.

“If we had a lighting strike on a roof for example ” Powell says “wed have a roofer whod have shingles and nails in his truck. Someone else would have tools or lumber or electrical supplies.”

As the department has evolved to its present force of 15 career personnel and some 25 volunteers the brotherhood bond has evolved as well to embrace a more professional organization. Though all three components of todays Wrightsville Beach Fire Department career staff volunteers and members of the departments intern program tend to create separate bonds within their spheres of influence they all work together.

“We pride ourselves on that ” says Fire Chief Frank Smith who comes from a long line of firefighters with a career firefighting grandfather and a father and uncle who were volunteers. Smith came to the department as a volunteer before applying and accepting the position of chief in 2003. “We are one department made up of many pieces which functions as a team to get the job done ” Smith says.

“We assign roles and responsibilities based on training and qualifications rather than pay status ” he adds. “All members of the department are required to attend the same number of training drills and we train as a unit.”

There is he notes a degree of gentle ribbing and competitiveness that exists between the departments volunteers interns and professionals but it vanishes instantaneously when the job or the training intensifies.

“Its really different from any other situation or job ” says Sunnie Parker who is presently the only female member of the department. “Its knowing that if something happened youd lay down your life to help them if thats what it took and that theyd do the same for you.”

“It really is a whole different level from anything else ” she says.

For Parker her membership in the brotherhood was never an issue. While she recalled some raised eyebrows when she first came to work for the department in 2007 it only took an adjustment period of about a month for those eyebrows to lower.

“Once I started training and they saw I could do (the job) it was fine ” she says. “There was some pressure to perform in the beginning but it was more on me than anybody else. I wanted them to feel comfortable.”

“Now ” she adds life for her in the Wrightsville Beach Fire Department is “like having a whole bunch of big brothers.”

Lieutenant Mike Chapman president of the Wrightsville Beach Volunteer Firefighters Association and a member of the department since the time that Parker joined says the differences between an all-volunteer force and one that employs paid staff firefighters is area specific.

“There are very strong and very weak departments ” Chapman says. “Its not so much about volunteers versus career firefighters as much as it is about where you are. (The combination of the two) gives you the best of both worlds; the extra personnel of a volunteer force and the rigidity of the paid structure.”

The chief is consistent and fair Chapman furthers.

“He sets the tone and culture (and) goes a long way to keeping everything on the straight and narrow.”

Like Smith Chapman notes that while pay scales create faintly drawn lines between volunteers and career firefighters the brotherhood crosses those lines with ease.

“Everybody may hang out in their own clique at the station but when an emergency of any type occurs were all expected to perform the same way. Everybodys on the same page ” Chapman says.

For seven interns all local college students the Wrightsville Beach Fire Department is more than just a station house its home. In exchange for room and board two interns per night serve on a rotating schedule becoming part of a 24/7 force that includes three paid staff who are always on duty at the station. By virtue of actually living in the station the brotherhood dynamic among interns is particularly strong. They share training duties and responsibilities with paid staff and the on-call volunteers and also share living space cook and share meals together and engage in a variety of non-fire-related college student activities like attending class dating and attendant conversation about those activities.

“They apply and its like applying for a job ” says Captain Dan Reid the departments former intern and volunteer coordinator. “We check references do background checks and conduct interviews. One thing they all pretty much have in common is that most of them are interested in becoming firefighters. Some are already junior firefighters when they come to us.”

“Theyre working here for their room and board testing the waters ” he adds. “Two of them will come on duty at 5 oclock and theyll have different duties as far as chores go. Theyll take care of that have dinner and participate in an hour of intern training a night.”

While only two are required to be on duty each night it is an unwritten rule that if a call comes in for either training or an actual emergency its all intern hands on deck. “The other five ” Reid says “will get on a truck and go.”

The interns he says weave their way into the brotherhood.

Every volunteer force whether full or supplemented by paid staff deals with recruitment issues the necessity of maintaining a force size capable of handling large scale emergencies.

“Thats generally true ” says Chief Smith “although with us its more of a retention issue because of the transitional nature of our community. The average time for interns and volunteers is between two and three years. The students of course graduate and move on to other things and as of right now theres not a single volunteer member of the department who could (absolutely) be considered a permanent resident of Wrightsville Beach.”