The Bridges of New Hanover County 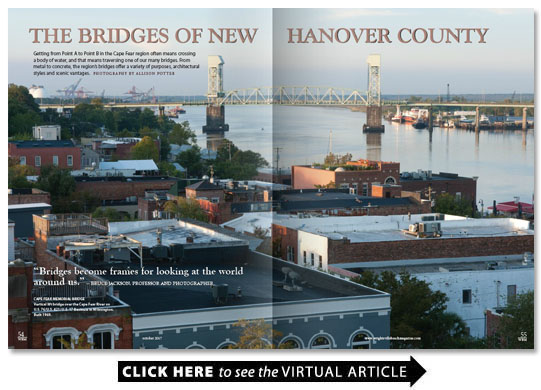 Getting from Point A to Point B in the Cape Fear region often means crossing a body of water and that means traversing one of our many bridges. From metal to concrete the region’s bridges offer a variety of purposes architectural styles and scenic vantages.

“Bridges become frames for looking at the world around us.”

“I find that it’s best to take one step at a time and cross each bridge as they come to you.”

“If you are good at building bridges you will never fall into the abyss.”

The two-story control house was rebuilt as part of the project at a cost of more than $650 000.

“Ask of the steel each strut and wire ? what gave it force and power.”

— Joseph B. Strauss chief engineer of the Golden Gate Bridge

Through truss bridge over abandoned Seaboard Coast Railroad on 6th Street in Wilmington.