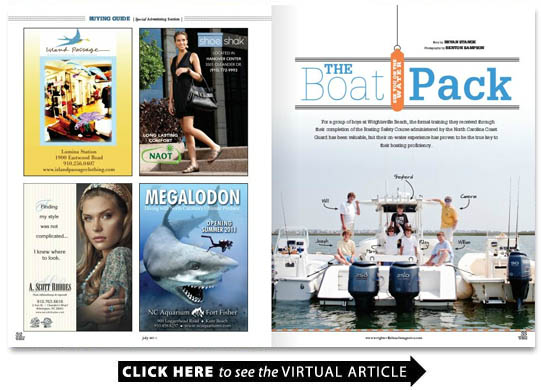 For a group of boys at Wrightsville Beach the formal training they received through their completion of the Boating Safety Course administered by the North Carolina Coast Guard has been valuable but their on-water experience has proven to be the true key to their boating proficiency.

Since the day Shepherd Thompson was able to put one foot in front of the other he has had access to the Intracoastal Waterway. Having been raised on the water at Wrightsville swimming fishing and boating were activities that followed not too far behind those first couple of steps.

Shepherd completed the North Carolina Coast Guard administered Boating Safety Course which was conducted at the Fran Russ Recreation Center in Wrightsville Beach Park and for the past two years the 15-year-olds parents have felt comfortable enough with his abilities to allow him to operate the familys 19-foot Grady White on his own.

Although Shepherd picked up the ability to be a successful boater by spending time on the water he certainly feels that the course advanced his understanding and made him a better boater. He uses both his experience and his knowledge from the course to navigate favorite fishing spots throughout Wrightsville.

And although Shepherd has put plenty of hooks into Spanish mackerel it is quite obvious that he has been hooked by the Gulf Stream. “I like water sports but I love fishing ” he says. “I like the Gulf Stream so much because the water is so clear and the fish are a lot bigger a lot of times well catch tuna and wahoo out there.”

The love of hunting motivated the Shaw brothers to take to the water. “I started hunting pretty young duck season is my favorite season of the year ” says Riley (bottom left) age 14. Riley hunts with his brother Harris (bottom right) and their father Harry either in New Hanover or Hyde counties.

In the warmer months Riley likes to go cruising along the Intracoastal Waterway and through the marsh trails and also appreciates the more leisurely side of boating. “Well go to Dockside or Causeway dock there and sit and dine ” he says.

The boys travel the waterway on their 20-foot Jones Brothers skiff which hosts their varied interests. The shallow-draft boat is effective as a hunting boat but the hull sides are tall enough to allow them to get out in choppier water where they chase bluefish Spanish mackerel and the occasional cobia.

While Harris 12 is a passionate fisherman he also is an avid and accomplished hunter both on land and water. “Around here when we hunt we get mostly buffs (bufflehead ducks) and mergansers. We get a lot of puddle ducks when we go up to the impoundment in Hyde County ” he says adding that while he enjoys fishing near shore he also looks forward to visits to the Gulf Stream.

As a member of a boating family Will Floyds father David introduced his son to the sport at a young age. At 6 Will was given his first boat a 9-foot plastic vessel with a 25-horsepower Mercury engine. Starting with this small craft Will learned to handle a boat and then advanced through several others each one a little larger and more powerful.

Today at age 15 he operates a 2011 21-foot Chaos center console outfitted with a 150-horsepower Yamaha outboard. The size of the Chaos allows him to carry more passengers than his previous boats and the construction and 8-foot beam result in a drier ride he says.

“Taking the (boating safety) course was more about getting it over with so Id be legalIts like drivers ed. Its the actual driving experience that really counts ” Will says.

One needs to observe the 15-year-old on the water to appreciate the truth of his statement. It is immediately clear that Will understands the rules of the water is very aware of what is going on around him and has a connection with and a feel for the limitations of his vessel.

Having earned the privilege to operate the boat on his own Will is able to enjoy a number of activities on the water. His favorites are cruising the waterway and trolling for fish. “I like fishing for Spanish (mackerel) and getting into kings sometimes too ” he says.

Already at the age of 14 Joseph Baggett has as good a grip on the backwaters around Wrightsville Beach as many inshore fishing guides. His Carolina Skiff allows him to run the skinny tidal creeks or marsh trails as he refers to them. “Youll mess up a prop before you know them (the creeks) ” Joseph laughs. “It takes about a year to really get it down.”

Joseph started fishing with his father aboard a 21-foot Kencraft. Then when he was a little older his father upgraded to a 23-foot Regulator. Spending time on that boat is where he really learned the ropes he recalls.

The Carolina Skiff is much more manageable than the Regulator and is a real utility boat for Joseph. “It really doesnt draw much water and theres a good amount of room ” he says.

Joseph enjoys taking the vessel out and pulling spoons for inshore fish but he also spends a lot of time on a surfboard. He can often be found with a board on the deck of his boat commuting to Masonboro Island with friends or with his little brother Polk. “We usually just bring one board and a boogie board and just switch off ” he says. “Pretty much every weekend I am surfing swimming or fishing.”

The thought of a pair of kids in their early teenage years on their own behind the helm of a 34-foot boat outfitted with twin 250-horsepower Yamaha engines sounds like a nightmare for most parents but it is just another summer day for the Bailey brothers.

Cameron 14 and William (right) 12 fish often with their father who is an extremely avid bluewater fisherman. The boys became accustomed to boating as youngsters cruising around on a 13-foot Boston Whaler. Camerons first solo trip was at the age of five when he took the Whaler to Seapath to buy a MoonPie however this didnt go over very well with his parents.

Today however they are comfortable letting the boys head out on their own.

“The instructor of the boaters safety course doesnt want us to rely on electronics. You learn how to use other things like your compass ” William says.

The family now has a 17-foot Whaler that the boys take out for adventures or to go tubing. When they are in the mood to fish they will often take the 34-foot Venture. On this boat they have been out as far as 70 miles with their parents and have managed to catch several sailfish.

“That kid (Cameron) can run a 65-foot boat as well as that one (the Venture). Ill leave him up on the bridge while I go down into the engine room. I trust him completely ” says David Floyd.