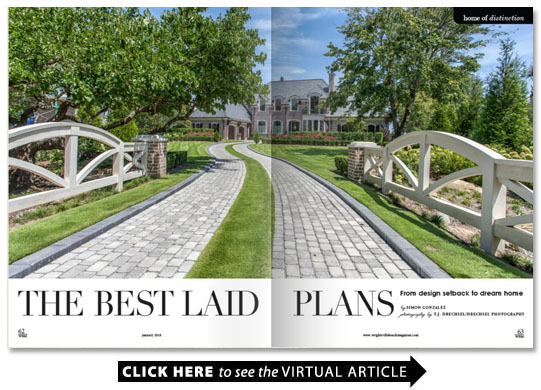 Plan A was expansion and renovation. Rich and Monika Williams Landfall residents bought the contemporary home at the waterfront end of their street intending to redo it into a traditional.

But after nine months of dealing with complicated and restrictive flood zone regulations and struggling with the remodel’s blueprints they realized it wasn’t going to work.

“It was like trying to fit a square into a circle ” Monika Williams says. “We finally looked at each other and said ‘bulldoze.'”

This time the couple started from scratch hiring Scott Sullivan of Sullivan Design Company to help make their dreams a reality.

“It gave us a blank slate ” Rich Williams says. “Going to Scott we were able to take a lot of things we wanted from a functional standpoint. We wanted a mother-in-law suite we wanted each of the kids to have a view and their own room. We wanted a place where the kids always come back and feel comfortable. And hopefully lots of room for grandkids one of these days.”

The Williamses relied on their own expertise for the interior design.

“We worked with Scott to build the framework and then Monika and I were involved on almost a daily basis coming into each room and figuring out what kind of feel and look we wanted ” Rich Williams says. “And then we’d go to the next room and make sure the transitions were there.”

Starting over also enabled Sullivan to site the home to maximize the views over the Intracoastal Waterway Mason Inlet and Hewletts Creek.

“It’s a balanced house from the front but it’s oriented to the view at the back ” Sullivan says.

The foyer opens into the formal sitting room that is mostly used for entertaining. A wall of windows and French doors affords guests ample views of the magnificent vista and access to outside living spaces. Hardwood floors contrast with white coffered ceilings. The former dining room featuring whitewashed wood walls is used when the entire family — Rich Monika their four daughters and Monika’s mother — enjoys meals.

Intricate hand-forged wrought iron on the stairway and upstairs balcony contributes to the European feel of the house. A casual living room on the first level is where the Williamses spend most of their time enjoying the spectacular views and the almost-rustic interior with a stone fireplace and beams made from reclaimed wood. Design elements including a stone fireplace dark hardwood floors and reclaimed wood ceiling are carried from the living room to the study. The airplane prints over the desk belong to Rich a private pilot. “That’s one of my favorite things in the study ” he says. “Those have hung in my room since my brother and I were kids. It’s something we’ve carried over through my entire life. There’s a lot of sentimental value to those.”

Monika’s favorite room is the kitchen.

“I love to cook and I cook all the time ” she says. “I love all the aspects of what we have in the kitchen the things we chose for it. And the fact that I can be in there and still look out the window and see the view too.”

Sullivan took full advantage of the elevation when designing the master suite putting in plenty of windows.

“We wanted to make sure that was as good as we could get it ” Sullivan says. “I think it’s got the prettiest views in Landfall.”

The corner window over the whirlpool tub gives a nice panoramic of the property and the water beyond. The bedroom ceiling is capped by wormy cypress and custom trusses.

The Williamses are a blended family with four daughters: two 20-year-olds who attend North Carolina State and High Point University and two 17-year-olds who attend Cape Fear Academy. Sullivan says the house was designed around a mandate to give each one a waterfront suite off the upstairs hallway with access to the outdoor terrace.

“Each one of the girls was very involved in the designing of her own room ” Rich says. “Each one would come into the store and spend time with Monika picking out fabrics and coordinating fabrics and furniture wallpaper. They each put their own personal likes and touch on their own rooms.”

A ground level rec room features a gathering area for games and socializing complete with a bunk room that can sleep four.

“That was a fun collaborative design effort ” Rich says. “With the brick veneer on the walls and the copper bar top there’s just a lot of design features that were fun to do. We were kind of going for a pub feel.”

It can serve as a man cave but it’s also an area where the girls hang out.

“Whenever they have friends over that’s where they are ” Monika says.

Outside living areas can be open to the great outdoors or closed off.

“We used Phantom Screen systems ” Sullivan says. “You flick a switch and screens will come down. There’s always a decent breeze coming in but if it gets stagnant they can drop the screens down. In the morning you will have sun in your face. You can drop it down a bit and it will act as a sunshade.”

Rich prefers to keep it open though.

“It’s such a serene relaxing location ” he says. “You can always go out and have a wonderful spot to relax and wind down. We enjoy all aspects of the house. But for me it comes back to being able to see so much of this beautiful area we live in. The nature the wildlife the birds the boats up and down the Intracoastal.”