The Beet Goes On 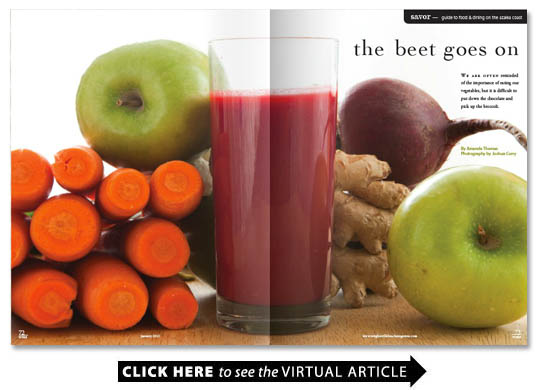 We are often reminded of the importance of eating our vegetables but it is difficult to put down the chocolate and pick up the broccoli.

Growing up some of us tried to get away with sneaking vegetables to the dog even though mom and dad lectured away about spinach for our muscles and carrots for our eyes.

I was not big on eating vegetables but found juicing to be the magic bullet for my health energy and vitality says Rick Civelli owner of Wrightsville Beach Surf Camp and Surfberry.

For those unable to stomach chewing large portions of beets or rutabagas juicing could be an alternate route for ingesting natural vitamins and minerals.

Thats the main benefit of juicing the immediate absorption of nutrients. You feel on a nutrient high within the first 15 to 20 minutes after drinking them says Stephanie Davis of Paulas Health Hut. Another nutritional goldmine in juiced produce is the enzymes they carry.

The digestive enzymes in fruit and vegetables break down your food. Without them your body is vulnerable to indigestion acid reflux and irregular bowel movements Davis says.

Since the produce used for juicing is raw and has not been heated juice drinkers receive a complete blast of enzymes. When we heat our food some of the nutrients are cooked out and without those enzymes it is difficult for our bodies to digest the food we are eating. To get your moneys worth drink your juice soon after creating or purchasing it.

I love juicing says Carolyn Atkinson of the downtown neighborhood restaurant the Flying Pi Kitchen. I love what it does for my customers.

The actual act of juicing takes less than three minutes; however juicing produce is time consuming. With some juicers prepping is easy. Apples do not have to be cored and some juicers can handle an entire beet at once.

My sister gave me a juicer for my birthday. You get what you need quicker a lot more servings at one time. And your nutrients go straight to your bloodstream says Jennifer Williams a relatively new juicer. Also make sure that your household is awake when you turn the juicer on it can be one loud machine.

You do it first thing in the morning for the best results before any other food Williams says.

The main difference between juicing produce and blending it is that a juicer separates the pulp from the liquid also separating the fiber while the blender mixes everything together. There are two main types of juicers: centrifugal and masticating. The centrifugal juicer is strictly for juicing produce. It uses a spinning technique with blades to grind the fruit and vegetables. The centrifugal juicer is deemed best for someone who juices infrequently as it is the less expensive of the two. The masticating juicer uses its blades to extract the juice from the fruit and vegetables.

Before investing in a juicer it is a good idea to try different juices. Besides the Flying Pi Kitchen on Fourth and Chestnut streets in Wilmington other juicing options include Surfberry open seasonally at Wrightsville Beach Tidal Creek Co-op on Oleander Drive and Loveys Market in Landfall Center. All juice menu boards offer multiple combinations of fruits and vegetables including the option of creating your own blend.

Davis is an avid home juicer. She mixes a handful of cilantro one quartered cucumber and three-fourths of a quartered celery stalk for her favorite juice. The water-based vegetables pump out quite a bit of juice which saves time and money. The cost of other raw vegetables can be pricey Davis says but Experiment with everything to learn how to save money and find your favorite combinations.

Davis also likes to mix carrots into her juice at home because of the sweet taste it adds. She mixes four to five carrots with one apple and an inch or two of ginger for a pleasing flavor.

Carrot juice is wonderful because of the high amount of vitamin A but be careful. Too much of the carrot juice can really raise your blood sugar says Karen Stewart a co-owner of Loveys Market.

The most popular juice bar beverage at Loveys Market is the kale smoothie made from five-to-six leaves of kale one half of a cucumber and one apple.

Carolyn Atkinson also adds kale stems to her juices and is a big fan of the beet combining carrot beet ginger and apple.

Most juice combinations start with carrots. Surfberry adds carrots into all but two of its made-to-order juices.

We add the carrots into our juices because of all the added benefits especially the vitamins and enzymes says Kelsey Monell assistant manager at Surfberry on Old Causeway Drive. The most popular carrot juice sold is Carrot Bay which includes six carrots one-fourth of an inch of ginger and two oranges.

Wheatgrass is one of the most popular types of juice to drink.

Wheatgrass detoxifies your system promotes weight loss and just one shot of it is equal to almost three pounds of fresh produce Monell says. Wheatgrass also contains more than 90 minerals including calcium boron chromium and copper.

Unlike wheatgrass citrus juices like orange and lemon are well known. Most citrus-based fruits need to be peeled before juicing. While apple and kiwi skins are edible and loaded with nutritional benefits the peels of most citrus fruits are not. Juicing citrus fruit at home takes a lot of effort and a lot of fruit.

One bag of oranges would typically yield about two glasses of juice Davis says. To maximize the juice pair it with vegetables. The strong citrus flavors mix well and mask some of the bitterness in some produce.

One of my favorite aspects of juicing is being able to fill up on those necessary benefits without feeling overly full from the fiber Stewart says.

Although juicing does not replace the benefits of eating raw vegetables the concept of juicing produce and drinking vegetables is a popular alternative. Each type of vegetable and fruit has different vitamins and nutrients the body needs to function properly. Drink your way to a healthier you.