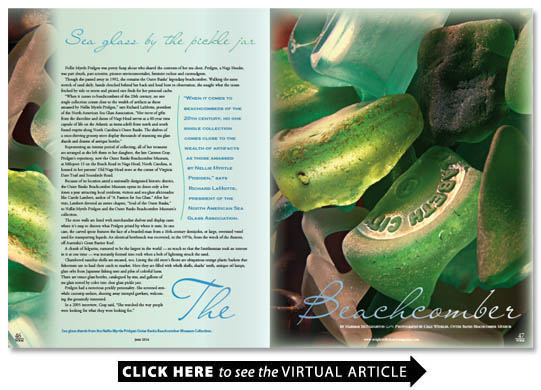 Nellie Myrtle Pridgen was pretty fussy about who shared the contents of her sea chest. Pridgen a Nags Header was part sleuth part scientist pioneer environmentalist feminist recluse and curmudgeon.

Though she passed away in 1992 she remains the Outer Banks  legendary beachcomber. Walking the same stretch of sand daily hands clenched behind her back and head bent in observation she sought what the ocean fetched by tide or storm and pirated rare finds for her personal cache.

When it comes to beachcombers of the 20th century no one single collection comes close to the wealth of artifacts as those amassed by Nellie Myrtle Pridgen says Richard LaMotte president of the North American Sea Glass Association. Her trove of gifts from the shoreline and dunes of Nags Head serves as a 60-year time capsule of life on the Atlantic as items adrift from north and south found respite along North Carolina s Outer Banks. The shelves of a once-thriving grocery store display thousands of stunning sea glass shards and dozens of antique bottles.

Representing an intense period of collecting all of her treasures are arranged as she left them to her daughter the late Carmen Gray. Pridgen s repository now the Outer Banks Beachcomber Museum at Milepost 13 on the Beach Road in Nags Head North Carolina is housed in her parents  Old Nags Head store at the corner of Virginia Dare Trail and Soundside Road.

The store walls are lined with merchandise shelves and display cases where it s easy to discern what Pridgen prized by where it rests. In one case the carved spout features the face of a bearded man from a 16th-century demijohn or large oversized vessel used for transporting liquids. An identical bottleneck was recovered in the 1970s from the wreck of the Batavia off Australia s Great Barrier Reef.

A chunk of fulgurite rumored to be the largest in the world — so much so that the Smithsonian took an interest in it at one time — was instantly formed into rock when a bolt of lightning struck the sand.

Chambered nautilus shells are encased too. Lining the old store s floors are ubiquitous orange plastic baskets that fishermen use to haul their catch to market. Here they are filled with whelk shells sharks  teeth antique oil lamps glass orbs from Japanese fishing nets and piles of colorful lures. There are intact glass bottles catalogued by size and gallons of sea glass sorted by color into clear glass pickle jars.

She allowed journalist writer Charles E. Cobb Jr. inside for a closer look.  He then featured Pridgen s collection in his October 1987 National Geographic story.

In 2004 Carmen Gray cradled her mother s heirloom collection from Nags Head to Rockport Massachusetts for Between the Tides the first Northeast Sea Glass Festival.

We talked our way onto the train Gray said laden with six European vacation-sized trunks packed with more than 350 pounds of her mother s flotsam.

The Outer Bankers were the surprise hit for many festivalgoers but most had come to meet LaMotte and seek his signature on their copies of Pure Sea Glass his self-published coffee table book.

In addition to autographing copies of his 2004 runaway bestseller LaMotte played antique sea glass road show with his fanatics who brought personal beach glass for him to classify.

When the Chestertown Maryland author opened one of Pridgen s assorted sea glass purses filled with 90-year-old purples colored by oxidized manganese last manufactured in 1915 he was swept away.

During his national book tour LaMotte made a special point of visiting the Outer Banks Beachcomber Museum where he could not contain his kid-in-the-candy-store reaction.

Like the reclusive collector herself LaMotte says the diverse items from our past have remained mostly out of the public eye. She never desired attention for her collection. Chaz Winkler and Dorothy Hope now carefully watch the store and its treasure. Their reluctance to move anything out of the nest is easily understood. Members of the beachcombing community would likely agree this is the immaculate collection. It s like the Sam s Club for beachcombers.