The Art of Textiles 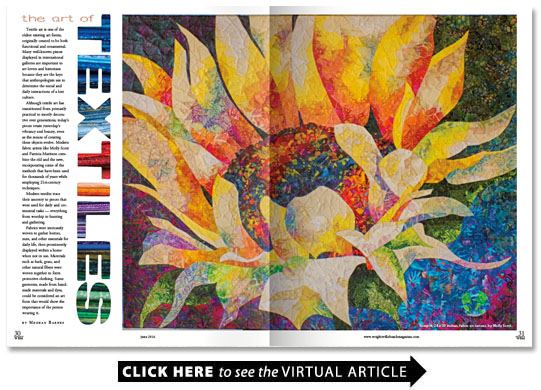 Textile art is one of the oldest existing art forms originally created to be both functional and ornamental. Many well-known pieces displayed in international galleries are important to art lovers and historians because they are the keys that anthropologists use to determine the social and daily interactions of a lost culture.

Although textile art has transitioned from primarily practical to mostly decorative over generations today’s pieces retain yesterday’s vibrancy and beauty even as the means of creating these objects evolve. Modern fabric artists like Molly Scott and Patricia Mattison combine the old and the new incorporating some of the methods that have been used for thousands of years while employing 21st-century techniques.

Modern textiles trace their ancestry to pieces that were used for daily and ceremonial tasks — everything from worship to hunting and gathering.

Fabrics were intricately woven to gather berries nuts and other essentials for daily life then prominently displayed within a home when not in use. Materials such as bark grass and other natural fibers were woven together to form protective clothing. Some garments made from hand-made materials and dyes could be considered an art form that would show the importance of the person wearing it.

Some ancient fabrics used for ceremonial purposes are carefully preserved and protected in museums around the world. The Paracas textiles discovered in Peru in the 1920s are brightly dyed alpaca and llama wool cloths believed to have been made more than 2 000 years ago and used to wrap mummified bodies. Examples are showcased in museums from England to Brooklyn.

Mattison a member of Wilmington’s Quilters by the Sea Guild uses modern techniques in her art.

She started by taking sewing classes then moved to quilting after retiring from her career as an anesthesiologist. Her inspiration came from working with other quilters who did not follow the traditional quilting methods — quilters who believed that fabric could be a medium just like paint.

“The newest trends in fabric art encompass a wide range of creating surface design with paint dye thread painting and an individual expression instead of a pattern ” Mattison says. “Photography and computer graphic applications are used more often. You can print your images on full-size fabric now.”

But her work also employs some of the older techniques. The same quilters who saw textile craft as a way to create art employ the traditional methods of dyeing materials by hand and use scrap and found materials to complete their vision.

Hand dyeing creates a one-of-a-kind color that can be closely matched but rarely duplicated increasing both the value and also the personal elements of the art itself. By incorporating recycled materials into her work Mattison is carrying on the legacy of traditional textile arts.

“I use all these techniques as well as dyeing my own fabric especially silk organza ” Mattison says. “I use this transparent fabric to shade and shadow in layers. This has added subtlety and dimensionality to my work. I can dye a wide range of colors that can’t be found in a store. I also incorporate upholstery and prom dress fabric. Every piece needs a little shine.”

Scott attended Peace College and then the School of Art and Design at East Carolina University. As her studies deepened she realized the importance of art history. She switched her major focusing on the evolution of art. It was from there that her love of quilting began which provided the inspiration for her current style of turning fabric scraps into works that look like paintings.

“When I moved to Emerald Isle in 2000 I started a quilt for our king-size bed ” Scott shares. “I wanted something that personally reflected our life. My husband had a lot of tie-dyes from all of the Grateful Dead shows he attended in college so I designed a quilt using those and our old pairs of blue jeans stored in the attic. It took two years and 16 pairs of blue jeans to make a quilt so large and heavy we could barely sleep under it.”

After finishing the large quilting project she was left with a lot of leftover scraps and the genesis of a new direction. She incorporated the oddments into a piece that helped form her style.

“I use the fabric pieces much like other artists use paint ” she explains. “Each small 1/4- to 1/2-inch piece can be looked at as a dab of paint. Except each dab of what I use as paint has even more depth of pattern. So not only do I work with color but what pattern fits as well.”

Working with diverse types of materials patterns and textures requires a lot of attention so Scott developed different focus methods. Instead of creating in silence she plays music that allows her to concentrate on her work for longer periods of time. She also learned new techniques to cut materials with razors and scissors to keep from fringing the fabric and losing the piece.

Next she had to be meticulous about leveling. Part of the illusion of making a piece of fabric art look like a painting is making sure the materials all lie flat so that they appear to be one solid construct.

“You do not want to have any overlaps that raise the surface of the work ” Scott says. “The ceiling fan is my largest enemy; I learned the hard way. After a long day of cutting pieces the right size and placing them in the perfect spot I lost it all when I turned on the ceiling fan.”

The careful focused work pays off when Scott has a finished colorful piece that’s as much a work of art as an oil painting.

Whether the piece is purely decorative or also functional today’s textile artists are carrying on a centuries-old tradition. The result is an art form that blends functionality with sheer beauty and brings a sense of artistic appreciation into daily tasks.