The Art of Serving Fried Chicken 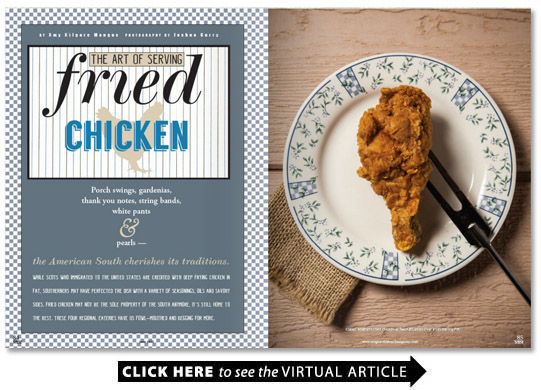 While scots who immigrated to the united states are credited with deep frying chicken in fat southerners may have perfected the dish with a variety of seasonings oils and savory sides. Fried chicken may not be the sole property of the south anymore it’s still home to the best. These four regional eateries have us fowl-mouthed and begging for more.

Co-owners Nicole Play and Gayleane White have been best friends for 26 years. Fifteen years ago they started cooking out of their homes to make extra money. They took orders and on Fridays delivered dinner plates to hospital rooms and friends’ homes. Nine years ago they opened Two Fat Ladies Over a Simmering Pot.

Nicole Play says she looks for good sales when buying chicken and fresh vegetables for the restaurant.

“I’m a mother and if I’m in the grocery store and I see a good sale on chicken then I’ll buy some for the house and for the restaurant ” she says.

She also travels to Fred’s Food Club in Greenville twice per month to load up her trunk with ice and boxes of 50-piece chicken.

Back at the restaurant Play pulls out any visible feathers and cuts away much of the fat from the dark meat — but not too much because “the fat is the flavor ” she says. After soaking in secret seasoning overnight the pieces are breaded with flour then fried in vegetable oil.

“We cook it just like you would do at home. Flour it and fry it ” Play says.

Macaroni and cheese is the most popular accompaniment to the fried chicken.

“It’s very rare we get an order that doesn’t have macaroni and cheese as a side ” Play says. “We also do all fresh vegetables. I’m actually snapping beans cutting corn off the cob cutting collards and peeling sweet potatoes. I do all of that.”

Each order comes with a hoe cake a flat piece of cornbread. Growing up Play’s mother and grandmother fried fish weekly.

“My mama would make cornbread; but she’d fry it in a cast iron skillet and called it a hoe cake ” she says. Play researched the term and found slaves who didn’t have access to a stove or oven placed the flat part of a hoe in the fire to cook bread.

“At the restaurant we used to bake biscuits and cornbread ” Play says. One day she told Gayleane she wanted to try some hoe cake on the flat grill just to see how people like them. “Ever since that day if I bake cornbread like in the squares people are like ‘Where’s the hoe cake?!'”

Epic Food Co. is all about clean eating. If there is such a thing as healthy fried chicken chef James Bain created a way to cook it.

“We par roast the chicken on a low heat in the oven ” Bain says. “That does two things. One it renders all the fat … and allows for a crunchier skin. It also allows us to cook the chicken faster when it’s ordered.”

“It’s very simple. We want to keep it somewhat traditional but take the extra step to make it a bit healthier ” Bain says.

The chicken is then fried in rice oil.

“It’s healthier and can take a lot of heat because good fried chicken is juicy with crispy skin ” Bain explains. Tabasco honey sits on the side — perfect for dipping or drizzling.

For sweet lovers there’s Marathoner’s Roasted Sweet Potatoes tossed with a touch of maple syrup and oats and baked with cinnamon on top. Ginger’s Faux Fried Rice a great option for low-carb dieters is grated cauliflower stir fried with snow peas and edamame beans and served with lemon and gluten-free soy sauce.

Wash down the tastiness with a fruit/cucumber/mint or lemon/rosemary infused water.

The Bird: Curried thighs and wings

When Valerie and Ulysses Lingo’s daughter Yolanda Blount asked her parents to invest in a Jamaican-themed restaurant in Wilmington Lingo quit her corporate job in Philadelphia and the couple headed south. After vacationing to the island for years the family that founded Jamaican’s Comfort Zone has perfected authentic Caribbean cuisine with a Southern flair.

“When we sat down and first wrote the menu what brought the curry fried chicken and anything fried to the menu was incorporating a touch of the Southern-type style eating but combining the cultures of the Caribbean and the South together ” Lingo says.

Traditional fried chicken batter is prepared with a mild curry powder blend. After the bird is fried in vegetable oil it is then simmered in gravy.

“You know in the South it’s all about the gravy ” Lingo says.

Steamed white rice is a popular side.

“People usually take that gravy and slide it on top of their rice ” she says.

Lingo recommends a salad for a balanced meal or callaloo — a Jamaican green similar to spinach.

“We mix it with red yellow and green peppers and saute it ” she explains. “We also have delicious fried okra — it’s done in the same batter.”

Whole from the Burgaw Piggly Wiggly.

Tuck a napkin in your shirt because Genteel Plantation manager Ricky Kelly’s fried chicken will take you back to when your mother used to fry chicken at home. Kelly is manager of Bobby Harrelson’s 875-acre private quail-hunting retreat. Not only is he the property’s caretaker quail raiser dog trainer and hunting guide Kelly along with Louise Spencer cooks for plantation guests. They say the secret to great fried chicken is nothing special — just salt pepper and flour.

Kelly says it doesn’t brown as well. Each time chicken is fried Kelly pours the remaining grease into a metal coffee can and keeps it refrigerated. A little new oil is added to each batch.

The meal is rounded out with straight-from-the-garden vegetables like collards or cabbage peas butter beans okra or rutabaga.

“We always have rice and gravy ” Kelly adds. “Because the chicken drippings make such good gravy.”

Shawnee’s Best Flour is used to bread the chicken and for Spencer’s bite-sized melt-in-your-mouth biscuits.

Kelly and Spencer have worked together for about 15 years.

“We’re a team ” Kelly says. “I come in here and she knows what I’m gonna do and I know what she’s gonna do. I do my part and she does her part.”

Side note: WBM staff recommends ordering a Pig Pickin’ Cake from the Piggly in Burgaw for dessert.