The Art of Salt and Time 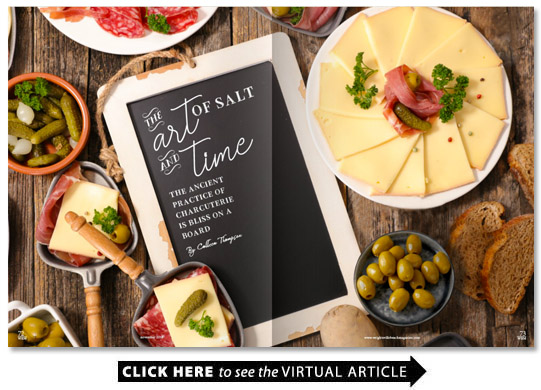 Meat salt air and time are the simple ingredients of an ancient craft based on the principles of curing salting smoking and preserving.

Many cultures — Spanish Italian German and French — have their own versions of charcuterie. Each country has developed its own style and unique flavors from Genoa salami in Italy Coppa ham in Spain bratwurst in Germany and smoked kielbasa in Poland.

Over time the art and tradition immigrated to the United States. Various states created their own charcuterie delicacies from sausages in Pennsylvania to cured and smoked hams in Virginia.

If you’ve ever eaten antipasto you already know about charcuterie. Been to a deli and ordered a Reuben sandwich? How about a smoked ham sandwich? Both are charcuterie. Even bologna has its roots in charcuterie.

Cured meat when done well is one of the greatest representations of food on the planet. A sort of alchemy happens when meat is coated in salt and spices and then left to dry on its own.

“The history of charcuterie in the sense of salting smoking and cooking to preserve may date almost to the origins of Homo sapiens ” author Michael Ruhlman writes in his 2005 book ‘Charcuterie.’ “It has been carried on in many forms through virtually every culture and it has been one of the foundations of human survival in that it allowed societies to maintain a food surplus.”

The preservation technique may date back to Roman times but it really flourished in 15th-century France. The French government prohibited the sale of uncooked pork so charcutiers (pork butchers) came up with ingenious ways to cook (salted and dried) meat that could then be sold. The charcutiers would hang the meats in their shop windows to draw customers in.

Charcuterie is rooted in the belief that nothing from the animal should ever be wasted. Heart lungs kidneys fat and brains were all used to create something delicious. It wasn’t until the 19th century that a few influential chefs heightened charcuterie’s reputation to a grander stage — French high society. And for a few centuries that’s where it remained.

Charcuterie is one of the principal categories of garde manger — French for “keeper of the food” — that involve preservation techniques dating from an era before refrigeration by using one of the world’s oldest preservatives salt. The salt draws moisture out of the meat thereby killing harmful bacteria.

Today classic charcuterie items include sausages pates terrines and confit but even familiar smoked or cured meats such as ham and bacon are technically within the realm of charcuterie.

The art of charcuterie has witnessed a revived passion particularly in the South on the part of both chefs and sausage makers (sometimes referred to as “salumists”). With the emergence of craft and artisan producers and a locavore mindset people are interested in where their food comes from and “artisan” has become a cue for quality.

It’s also been a way to bring the process into the product. People want to know how it’s made and charcuterie taps into that culture. In North Carolina in particular we are starting to see a surge of interest. Pork has been embraced for generations and chefs are able to get their hands on whole hogs from farmers who are raising specific heritage breeds that are better for curing.

Everything on a charcuterie board takes time and attention. Happiness after all is almost always derived from time. In an era where we have sushi on revolving conveyor belts pizza on speed dial and little connection to where our food comes from the art of cured meats handmade sausage and slow cooked pate allows us to gather friends and family and take it slow.

Building a Charcuterie Board

When building your own charcuterie selection keep these three things in mind: taste texture and tartness.

There is an art to making up a charcuterie board but it doesn’t have to be overwhelming complicated or fussy. Authentic food is trendy. It’s simple food prepared with good ingredients

Charcuterie is rich and filling so a little goes a long way. If the charcuterie is an appetizer or starter course estimate around 2 ounces per person. If the charcuterie is the main food feature of your gathering estimate roughly 5 ounces per person. Your two basic categories are crudo (raw cured meat) and cotto (cooked meat). Cured meats such as prosciutto are saltier and more intense so balance them with the fattiness and sweetness of cooked meats like ham.

Originally all pate was created to use up the excess product — offal trim fat. Pate and terrines are essentially a mixture of fine to coarsely ground meat with additions like vegetables truffles and nuts cooked in a baking dish to form a “block” or “mold.” Mousse is also a mixture of meat and additions like truffles nuts cognac and vegetables but its texture is pureed and smooth. It’s not a must-have on a board but it brings a different flavor and texture.

Pickled vegetables are a fantastic pairing with meats because they cut through the richness of the fatty salty meat and the acidic qualities will neutralize any strong flavors left on the palate. Include vegetables such as olives pickled onions pickled okra carrots cauliflower or mushrooms.

Traditionally a genuine charcuterie plate is just meat but it’s acceptable to add one or two cheeses. It’s important to choose cheese that will counteract the saltiness of the meat and add a balance of texture. It’s also a good idea to choose cheese made from the milk of different animals like cows goat and sheep.

Jams or preserves add flavor and sweetness to balance out the dry and salty meat and cheese. Fig spread goes marvelously with almost any cheese and meat so it’s easy to include. Apricot jam tomato jam scuppernong jelly blueberry preserves and grape jelly also work perfectly.

This is the essential vessel for all of the above and keeping it simple is best. Sliced fresh baguette is really all you need.

Coppa is made with trimmed and boned pig’s neck covered with sea salt pepper cloves and nutmeg and left to cure for about 10 days before being hung to air dry for 4-6 months.

Guanciale is made from pork jowl. It’s similar to pancetta but with a richer flavor.

Bresaola is a technique that uses beef tenderloin that is salted and air-dried. The Spanish version is called cesina.

Mortadella is similar to bologna but much better. Mortadella is cooked (cotto) rather than cured raw (crudo) and is seasoned with black pepper and occasionally pistachio.

Saucisson sec is a dry-cured sausage similar to salami made of pork or sometimes wild boar.

Finocchiona is a salami made with fennel for refreshing sweetness.

Prosciutto di Parma (made in Parma Italy) is considered some of the best prosciutto money can buy. It is made from specially raised pigs and salt.

Porchetta is made by gutting deboning and roasting an entire pig. Porchetta has a fatty savory taste and is heavily salted and seasoned with herbs like garlic rosemary and fennel.

Salami is cured as a whole muscle before being ground up with spices of fennel hot and smoked paprika and salt. It is stuffed in natural casings and then left to cure and dry.

Capicola (or capocollo) is dried salt-cured whole pork shoulder or pork neck that is pressed into forms for a tight texture and distinct look.

Soppressata refers to pressed Italian salami made of pork. The best quality soppressata salami is made only from a pig’s thigh or ham. Recipes differ but often include nutmeg cloves and cinnamon for sweetness and garlic coriander black pepper cayenne pepper basil rosemary oregano and fennel for the savory side.