The Art of Love

Vincent Van Gogh said it best: “There is nothing more truly artistic than to love people.”
And in the Cape Fear region art and love are alive and weaving themselves through and around each other like two contrasting colors in a painting performers onstage or stone and silver melded into an exquisite ring. For some the words are interchangeable coming from the same point in a person’s soul. And so in honor of Valentine’s Day we asked four artistic couples to fill us in on the secret of their passion. 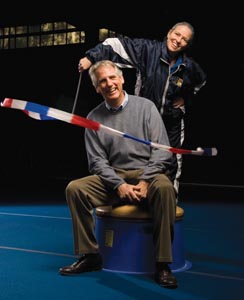 When Rob and Michele first met she was a talented 16-year-old dancer in Tahlequah Oklahoma and he was a debonair 22-year-old actor in town for a show. That summer they performed in Trail of Tears an outdoor drama about the removal of the Cherokee from the southeastern United States to Oklahoma. After shows they spent all their time together at cast dormitories and parties. So were they officially dating?

Whether they were dating or not a string of too-good-to-be-true coincidences landed them in the same plays for the next few consecutive summers. As performers in the Southeastern Theatre Conference they worked in Oklahoma Amarillo and Atlanta and then both landed jobs at the Alliance Theater. “We decided to go to New York or California – together ” Rob says.

California it was. In Los Angeles they worked for a 60-seat theater in Hollywood and produced an adapted version of A Christmas Carol – a version staged in the streets with the main characters as homeless people. Rob wrote the adapted version and starred as Bob Cratchit; Michele choreographed the musical’s dance elements. Oh yes then they married bought their first house and had their first child Holden in 1982.

They moved north of Los Angeles – to the rural Kagel Canyon area – where Michele taught rhythmic gymnastics a style that combines ballet gymnastics and theatrical dance using hoops balls and ribbons. Rob commuted to his theater job in LA and they had two more children: Zoe and Jack.

But after the Northridge earthquake in 1994 Michele wanted to move the kids. A friend convinced the Zapples to look at Raleigh and from there they found Wilmington.

Rob jumped feet first into the Port City theater community starring as Atticus Finch in a production of To Kill A Mockingbird at Thalian Hall and bringing his version of A Christmas Carol to the same theater. He is now the board president of the Thalian Hall Center for the Performing Arts a nonprofit that fundraises and manages the space. Michelle’s career also blossomed – she and business partner Rebecca Bishop opened Carolina Gymnastics Academy (on Shipyard Boulevard).

How have they made their relationship work after all these years?

“Our commitment to the kids ” says Michelle.

“Patience ” says Rob “and not sweating the small stuff. Individual things that happen good or bad do not exclude what’s happened before or define what happens in the future.” 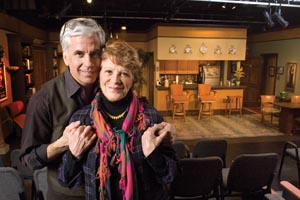 Resurrected in what used to be considered a rough neighborhood the Red Barn Studio Theatre on S. Third Street feels intimate like a cup of coffee shared between two kindred spirits. And sure enough that’s how it all came about.

Award-winning Broadway actress and singer Linda Lavin came to Wilmington 15 years ago to make a new life. So did actor and painter Steve Bakunas. On November 17 1999 at the opening of Wilmington’s City Stage Theater they sat a row apart and after meeting realized that they had a friend in common and perhaps should get coffee some time.

“It was a surprising and delightful and meaningful cup of coffee ” says Linda. But the star of Alice one of TV’s most popular and most enduring sitcoms had been married twice before and wasn’t looking for that kind of relationship. Neither was Steve. Still the devotion they shared for the local theater community (and the arts) brought them together.

“I learned a lot about true love from Linda ” Steve says. “This love really comes from my center – not just my mind not just my art. I wondered “What would keep me from being married?”

He realized that the answer was “nothing” and proposed in a Chicago restaurant. She said yes and they were married on February 14 2005.

In 2007 the newlyweds bought the old run-down automotive garage on S. Third Street and remodeled it into a secondary theater in order to have a place that they could rehearse when Thalian Hall wasn’t available.

“We thought the building could be a second set which is a great thing for actors and directors ” Steve says. “But then we thought ‘Let’s do it for ourselves.'” The first performance in the Red Barn was Doubt. Its success led Steve and Linda to produce a second play Collected Stories. Since then with Linda and Steve filling the roles of creative directors producers actors directors and set designers the Red Barn has presented a string of critically successful and popular productions.

Singing acting painting designing … For an artistic and loving pair like Linda Lavin and Steve Bakunas the sky’s the limit. 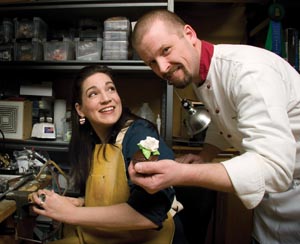 When Sarah Westermark knows what she wants she goes after it. And what she wanted in the autumn of 2004 was Hans Westermark. She knew that he was an accomplished baker and cake decorator at Apple Annie’s and thought he was devastatingly handsome. A classical singer she also knew his mother through the local musical grapevine.

“I saw her [Hans’ mother] at a party and said ‘Why don’t you hook me up with Hans?” Sarah recalls. When they both “somehow” ended up at the same concert Sarah pretended not to notice Hans a few seats over recording the event for his mother. The couple met that night dined afterwards at Indochine and talked for hours.

“She expressed that she was interested in electronics ” Hans says which led the couple to his house after dinner so he could show her his stereo system. Sarah was bored to tears but never let on.

“It took me a while at least one or two years after marriage to accept the fact that she wasn’t into electronics at all ” Hans laughs.

Marriage came quickly for the couple. Two weeks into their courtship they realized that they both just knew.

For their wedding held in the gorgeous Thalian Hall ballroom Hans handcrafted marzipan roses on the multi-layered Victorian-style hazelnut wedding cake brushed with bourbon. “He sculpted it petal by petal ” Sarah says.

Hans cuts semi-precious gemstones and hands them to Sarah the metalsmith who fastens them into exquisite shapes and designs. The jewelry can be found in several local stores and is also available online (at etsy.com) and at various craft shows across the state.

In addition to beautiful music cakes and jewelry Sarah and Hans have created something else that’s pretty darn beautiful: a family – Graham 3 Sophia 9 and Alyssa 14. Sophia is Sarah’s daughter from her first marriage and Alyssa is Sarah’s niece.

“Hans doesn’t differentiate between any of the kids ” Sarah says. “We jumped into this together.” In fact a family is something that Hans had wanted for a long time. His love for Sarah made it possible.

“It’s like life didn’t exist before we got married ” he says. “Now everything feels like I have a purpose.” 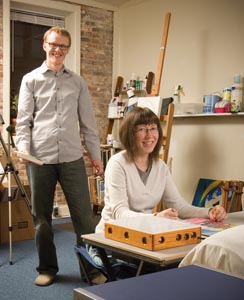 It was a pick-up line only an artist could pull off.

Nikki said “Hi I like your drawing ” and Michal asked her out.

That was during art class at Rocky Mountain College in Montana when Michal was a junior and Nikki was a freshman. Ten years later they still encourage each other artistically in their shared studio in Historic Downtown Wilmington where Michal produces large multimedia paintings inspired by the westernization of Japanese pop culture and Nikki creates mixed collage.

Their courtship says Michal “was very gradual – we didn’t rush into things.”

“Except we moved in together after six months of dating ” Nikki points out.

“Well ” Michal says with a smile “when we first started dating my mom picked me up after school and said “That’s the woman you’re going to marry.”

In fact Michal’s relationship with his mother was one of the first things that Nikki admired about him. A single parent Michal’s mother somehow managed to move her children to the United States from a refugee camp in Poland following the collapse of the communist regime.

And it turned out that Mom was right about Michal and Nikki: The couple was married following their college graduations. A few months after their wedding they moved to Chapel Hill North Carolina because they’d heard it was home to a dynamic arts scene. As visual artists however they were somewhat disappointed to find that the town was more musically than visually inclined. When Michal’s mother moved to Wilmington they decided to give it a try.

“Downtown sold us ” Michal says. “It seemed like a vibrant community.”

The couple hopes to work in Japan as early as this summer as Japanese Exchange and Teaching Program (JET) instructors. The program requires a one-year commitment but it’s an adventure they’re ready to take on as artists … and as a couple.

“Nikki and I are on quite a journey ” Michal says. “And that journey may very well take us even further.”