The Art and Challenge of the Portrait 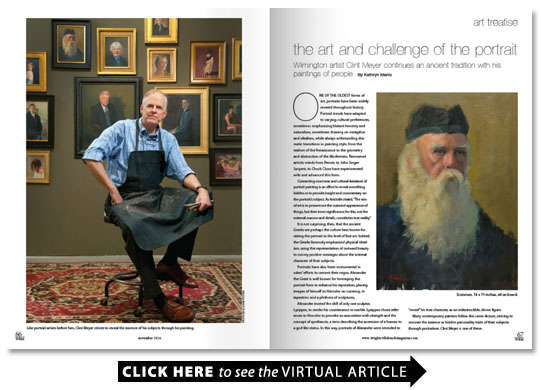 One of the oldest forms of art portraits have been widely revered throughout history. Portrait trends have adapted to varying cultural preferences sometimes emphasizing blatant honesty and naturalism sometimes drawing on metaphor and idealism while always withstanding dramatic transitions in painting style from the realism of the Renaissance to the geometry and abstraction of the Modernists. Renowned artistic minds from Renoir to John Singer Sargent to Chuck Close have experimented with and advanced this form.

Connecting most eras and cultural iterations of portrait painting is an effort to reveal something hidden or to provide insight and commentary on the portrait’s subject. As Aristotle stated “The aim of art is to present not the outward appearance of things but their inner significance; for this not the external manner and details constitutes true reality.”

It is not surprising then that the ancient Greeks are perhaps the culture best known for raising the portrait to the level of fine art. Indeed the Greeks famously emphasized physical idealism using the representation of outward beauty to convey positive messages about the internal character of their subjects.

Portraits have also been instrumental in rulers’ efforts to cement their reigns. Alexander the Great is well known for leveraging the portrait form to enhance his reputation placing images of himself as Hercules on currency in tapestries and a plethora of sculptures.

Alexander trusted the skill of only one sculptor Lysippos to render his countenance in marble. Lysippos chose references to Hercules to provoke an association with strength and the concept of apotheosis a term describing the ascension of a human to a god-like status. In this way portraits of Alexander were intended to “reveal” his true character as an indestructible divine figure.

Many contemporary painters follow this same dictum striving to uncover the essence or hidden personality traits of their subjects through portraiture. Clint Meyer is one of these.

His studio at the Artworks space in downtown Wilmington is full of thoughtfully arranged portraits many of which feature family members friends and copies of works by his favorite painters. Meyer’s works are drawn from photographs of loved ones and friends as well as from models.

Meyer a gastroenterologist by trade began what he calls his “second career” in art by making plein air paintings and landscapes. He became an artist in a unique way.

“When I was younger I always wanted a huge landscape painting to hang in my home ” he says. “But of course beautiful paintings are expensive. In that void I started to paint and realized ‘You can do this yourself.'”

Attracted to the challenge of acquiring a technically difficult skill Meyer learned how to create the paintings he enjoyed through practice research and workshops with some of the many talented artists in the Wilmington area. Chief among them is the accomplished portrait painter Dan Beck who holds workshops and hosts figure-drawing sessions that Meyer regularly attends.

After mastering the landscape format Meyer turned to portraiture as a new way to expand on his talents.

“I like the challenge ” he explains. “I also enjoy the opportunity to interact with the people other painters and models. If you practice medicine you have to really love people. When I paint someone’s portrait I get to know them even better.”

Meyer’s portraits demonstrate an often sought-after quality in portraiture — the ability to communicate something about one’s subjects. “Tina ” a portrait of a nurse who works with the artist and is also a bodybuilder depicts a physically strong woman with confident posture and a gaze that conveys fortitude and strength of a different kind.

“Chuck ” Meyer’s portrait of a beloved friend who died shows a kind man who looks away from the viewer with a small and slightly mischievous grin playing on his face.

Meyer hones his craft as a portrait painter by studying contemporaries and old masters.

“You learn from copying ” he says.

The portrait alongside the history painting has been the cornerstone of prominent art academies in Europe since the late Renaissance. And before the emergence of the academy artists like tradesmen apprenticed with skilled painters to learn their craft. The portrait has been considered one of the most challenging and crucial stepping-stones of fine-art mastery since then.

This status is influenced by the ancient Roman preference for naturalism and finely honed detail. The Greeks considered physical beauty independent of realism to be a demonstration of the internal qualities of the subject. But Roman portraitists were inspired by the concept of “verism ” or truth. This philosophy launched an appreciation for everyday subject matter over the heroic and idyllic styles preferred by their predecessors.

To the contemporary eye surviving Roman portraits can sometimes seem “unflattering.” The Romans however saw this style of representation as a sign of strong character suggesting the subject was unconcerned with vanity and living an experience-filled life. The need to faithfully and painstakingly recreate the visage of the sitter down to individual wrinkles and sunspots required immense technical skill and established the portrait as one of the highest achievements in art.

Painters from the 15th century onward found a happy medium between the iconic Greek and Roman styles. Portraits during these periods faithfully represented their subjects but played with style technique light brushstroke allegory and allusion to imbue the images with varied meaning.

A well-known example is the “Arnolfini Wedding Portrait” by Jan van Eyck considered a pioneer of secular portrait painting. The work is flush with symbolism that informs the viewer about the couple and encourages a particular interpretation of their marital future.

A dog in the foreground represents loyalty and steadfast commitment while the couple’s clothing and the tapestries and fabrics in the room reveal the husband’s position as a textile merchant. Additional details like a carved figure of Saint Margaret the patron saint of pregnancy and childbirth as a finial on the bedpost and the chaste position of the couple’s hands indicate hopes for a happy and fruitful marriage.

Among the many artists that Meyer admires and regularly draws inspiration from is Russian-American portraitist Nicolai Fechin who practiced in the early decades of the 20th century. Fechin had a distinct style and painted the faces of his subjects with precise crisp lines and fine-tuned detail. His masterful use of light and shadow allowed the eyes to convey the majority of the image’s emotional content leaving their expressions more neutral and mysterious. As the plane of Fechin’s paintings moves outward the details become more abstracted and impressionistic.

Fechin’s influence on Meyer’s work is apparent in the painter’s use of abstracted darkly colored backgrounds careful dispersion of light on the subject’s face and use of looser brushstrokes as the eye gets closer to the outer rim of the canvas. Meyer’s portraits also possess a similar sense of subtlety foregoing overt or dramatic faces for more subdued expressions and carefully rendered eyes.

A portrait of the artist’s mother for example features a straightforward composition of a forward-facing figure from the chest up on a dark background. But the sitter’s eyes seem to twinkle and this coupled with the delicate knowing smile on her face gives the impression of a kind and playful personality. Meyer masterfully manipulates shadow and light to add warmth and character to the image.

The artist also draws inspiration from the Impressionists. With contagious amusement he recounts a story about Cecilia Beaux “the greatest woman painter ever ” he says despite the greater fame of her contemporary Mary Cassatt. As Meyer explains Cassatt’s cousin commissioned Beaux to paint a portrait of her despite Cassatt having painted the same cousin a year before causing some tension in the U.S. Impressionist art scene.

Meyer’s portraits of various models that recall the famous “odalisque” pose of the 18th century display this interest in Impressionistic techniques. These works have looser more colorful settings and trade precision of depiction for quality of paint. In these portraits Meyer achieves the Impressionist-inspired goal of conveying a feeling experienced in a scene rather than focusing on specific information about the scene itself.

10 hours at a time in his studio he makes a point to emphasize the most important part of his practice.

“I did not pick this up for work ” he says. “I picked it up for enjoyment; a source of pleasure.”

Meyer’s insight into the portrait medium and the nature of the human spirit along with a commitment to self-challenge have led to a body of portraits that invite the viewer to look for hours and unearth all of the secrets they hold. While the artist does not frequently show his work he can regularly be found at the Artworks space devotedly honing his considerable skill.