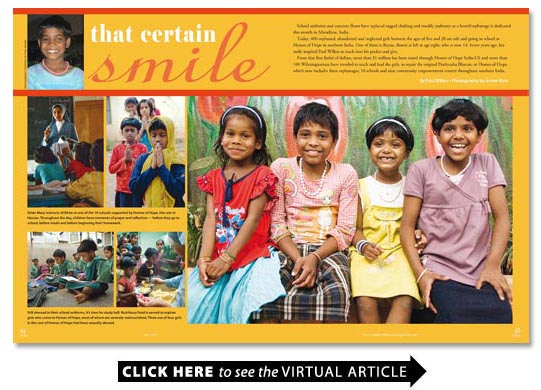 School uniforms and concrete floors have replaced ragged clothing and muddy pathways as a hostel/orphanage is dedicated this month in Maradiyur India.

Today 400 orphaned abandoned and neglected girls between the ages of five and 20 are safe and going to school at Homes of Hope in southern India. One of them is Reena shown at left at age eight who is now 14. Seven years ago her smile inspired Paul Wilkes to reach into his pocket and give.

From that first fistful of dollars more than $1 million has been raised through Homes of Hope India-US and more than 100 Wilmingtonians have traveled to teach and lead the girls to repair the original Prathyasha Bhavan or Homes of Hope which now includes three orphanages 18 schools and nine community empowerment centers throughout southern India.

It was two in the afternoon in Kochi India and Tracy and I were riding in another air-conditioned car on this our well-appointed and long-awaited vacation once again insulated from the heat and poverty that surrounded us. Our driver told us we still had a few hours of his service: What was our pleasure; what would we like to see?

Strange isnt it what blurts out of our mouths when we least expect it? Something I didnt even know was welling up inside me.

The children I said so many children begging on the street who takes care of them?
We had seen the magnificence of India but we had also witnessed the horrific conditions of the street people. The children especially haunted us those bundles of rags with dirty faces begging at our car window their eyes hollow their pride a distant memory if even that.

I dont think it was a question the driver was too often asked from his clients. He hesitated and then said I could tell you but if you dont mind Ill show you.

We bumped along rutted Binny Road to an iron gate. Thrown open a group of girls eagerly ran toward us. It was an orphanage Prathyasha Bhavan Home of Hope administered by the Salesian Sisters of Don Bosco Catholic nuns and within it were some 70 girls aged six to 18. At first it looked like a perfectly fine place clean grounds well-dressed girls but that was deceiving. The girls slept on the hard concrete floor of a school assembly area because there was no other room for them; the pantry held a pitifully small mound of vegetables for that evenings curry; the tainted water assured dysentery would remain a normal part of life.

Sister Sophy took us around all-the-while providing tragic histories about the smiling seemingly happy girls. With each story I could feel my heart thumping faster and faster.
This one was forced into prostitution at eight years old. That one saw her mother run over by a train as they begged in a station. That one was forced to bury her baby sister after her mother killed the child because she was not a boy Sister Sophy said.

After the tour I reached into my pocket. Whatever I had dollars rupees I would leave behind. Prathyasha Bhavan was a very poor place. If it had not been for a little girl standing in the shadow of Sister Sophy I would have given my donation then climbed back into my air-conditioned car and returned to my air-conditioned life. The child was wearing sunglasses and I needed to know why.

Little Reena had been begging on the street with her mentally ill mother Sister Sophy said. They were separated and the beggar mafia kidnapped Reena.
Sister Sophy removed the sunglasses.

They took her to their place held her down hand and foot and with a darning needle gouged out her eye so she would make a more pitiful beggar and bring them more money Sister Sophy said.

Her tone was even uninflected the voice of a woman who had witnessed so much cruelty.
I looked down into Reenas upturned face: One eye was perfect and bright the other a dull mass of dead tissue. By now I could barely breathe. Without hesitation Reena returned my look with the most beautiful and trusting smile I had ever seen in my life.

My mind was a jumble of emotions rage pity and helplessness. Then one clear thought pushed all others out of the way: Reena you have had a horrible past. Somehow some way I want to make your future the best I can.

That smile that certain smile continued to well up in my mind until I came home to Wilmington in early 2006 where I taught at UNCW. I was a reasonably accomplished writer and journalist and I had no background that would qualify me to help.
I stumbled along at first. Reena and the girls were sleeping on the floor. I could help there. That Christmas I reached out to friends with an appeal I called Bed for Reena.
I raised a few thousand dollars and returned to India bought the mattresses and mattress covers and promptly found out this was perhaps the worst idea I could have come up with. What happens to mattresses and mattress covers on dirty floors? Exactly. The mattresses went into storage.

Forget about mattresses; the girls needed a proper home not the concrete floor of the school where each morning they quickly rolled up their mats before the other students arrived.

I began to speak in churches to civic clubs in schools to just about anyone who would listen and Home of Hope soon to be Homes of Hope was born.

To be honest I dont know exactly how this happened but Home of Hope seemed to have a life of its own. People responded and responded generously when I told them about Reena. A homeless man in Seattle put 73 cents in a church envelope which was all he had and told me to help those kids. Other people wrote checks for amounts I couldnt quite believe and soon there was enough money to build a new orphanage in Kochi.
When Tracy and I were preparing to go to the dedication of the orphanage I received a call from Stuart Padley a Microsoft executive I had met at one of my talks. He was at another orphanage run by the Salesian sisters this one in Secunderabad Hyderabads twin city.
Its worse than Kochi Paul. Horrible. Kids are sleeping four and five under a blanket in a tiny rented building Padley said.

Our work wasnt finished; it had just begun.

Today through the incredible generosity of people all over the globe we have two more orphanages under construction and by years end more than 400 orphaned abandoned and neglected girls will be safe and going to school in our Homes of Hope. We have just started raising awareness for two more orphanages one for HIV orphan girls near Chennai and another in Assam for Adivasi (tribal) children one of Indias lowest and poorest castes.

That help has come in many forms in the past seven years. Wilmington Downtown Inc. and Wilmington East Rotary clubs have procured grants for solar powered water purification units. Those purifiers and others from a South Brunswick Rotary grant will provide clean water for 30 Salesian sites in South India.

Through our Used Books New Lives initiative more than 300 000 books have been donated and shipped to India either starting or enhancing 18 libraries. The books we sell on Amazon have paid for buses and diesel generators so that children from outlying areas can go to school. Once the generators get there Indias notorious power cuts wont interrupt the day.

When Dr. Albert Tuttle a Wilmington dentist closed his practice and donated his entire office X-ray machines power drills instruments and a compressor we packed up everything and Coastal Beverages trucked seven pallets to the Port of Charleston. Today we have a first-class three-chair dental clinic in Bangalore that serves our children the sisters and poor villagers.

I am constantly struck by the basic goodness of people: Wilmington Yoga Center travels to India every year for a service retreat; IndoJax surfers are in their fourth year of going to India to take girls surfing providing an adventure that instills confidence in a unique way.
More than 200 people have gone to India as HopeCorps Volunteers our version of the Peace Corps to work alongside the sisters teach English music and art but most of all to be present to girls who yearn for someone who cares. Wilmington professors from UNCW elementary school teachers mothers and sons and families have traveled more than 10 000 miles to share their talents but even more their love for our girls.

HOW TO HELP HOMES OF HOPE

$300 supports a childs expenses for one year.

$3 000 helps build an orphanage or pledge to raise enough for a room in the new orphanage.

Donate goods and services from your business or organization and sponsor a benefit/fundraiser.

Host a birthday party for your child for Homes of Hope instead of donating gifts.

Encourage friends and family to tap into their passions and share them with the girls of Homes of Hope.

Refer grant program and other philanthropies to Homes of Hope.