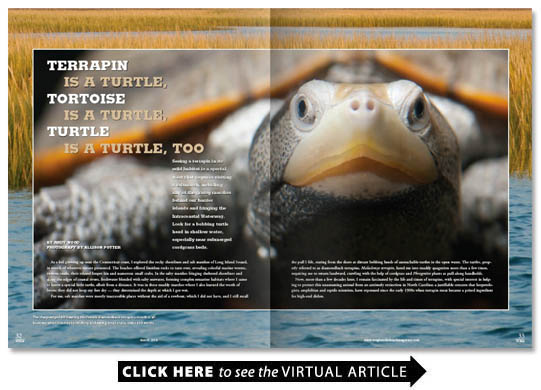 Seeing a terrapin in its wild habitat is a special treat that requires visiting a saltmarsh including any of the grassy marshes behind our barrier islands and fringing the Intracoastal Waterway. Look for a bobbing turtle head in shallow water especially near submerged cordgrass beds.

As a kid growing up near the Connecticut coast I explored the rocky shorelines and salt marshes of Long Island Sound in search of whatever nature presented. The beaches offered limitless rocks to turn over revealing colorful marine worms various snails their related limpet kin and numerous small crabs. In the salty marshes fringing sheltered shorelines and along the edges of coastal rivers freshwater blended with salty seawater forming complex estuarine habitats where I came to know a special little turtle albeit from a distance. It was in these muddy marshes where I also learned the worth of boots; they did not keep my feet dry — they determined the depth at which I got wet.

For me salt marshes were mostly inaccessible places without the aid of a rowboat which I did not have and I still recall the pull I felt staring from the shore at distant bobbing heads of unreachable turtles in the open water. The turtles properly referred to as diamondback terrapins Malaclemys terrapin lured me into muddy quagmires more than a few times requiring me to return landward crawling with the help of cordgrass and Phragmites plants as pull-along handholds.

Now more than a few decades later I remain fascinated by the life and times of terrapins with special interest in helping to protect this unassuming animal from an untimely extinction in North Carolina; a justifiable concern that herpetologists amphibian and reptile scientists have expressed since the early 1900s when terrapin meat became a prized ingredient for high-end dishes.

Whats in a name?

A brief bit of background regarding the words terrapin tortoise and turtle might be helpful. To begin turtles are reptiles as are crocodiles lizards and snakes. The group of animals we call turtles is scientifically called Chelonia; a Greek-derived word referring to the turtles protective shell its shield of armor.

All tortoises and terrapins are turtles just as the various species of so-named sea turtles are more correctly called turtles; as in loggerhead turtles green turtles or leatherback turtles while tortoise is the name for a terrestrial turtle most with high-domed shells and thick unwebbed hands and feet.

In North America the name terrapin is applied only to the diamondback terrapin a strictly brackish meaning mixed fresh and salt water turtle in the family Emydidae.

Terrapins resemble their common freshwater cousins. Found in lakes neighborhood ponds large streams and rivers terrapin cousins or pond turtles go by the nicknames slider or cooter including yellow-bellied slider and Florida river cooter. Sliders and cooters are also referred to as basking turtles owing to their habit of hauling out onto logs and shorelines to lounge and warm in the sun a behavior indigenous to terrapins as well.

The diamondback moniker is a reference to the prominent nearly concentric ridges formed on the turtles carapace or top shell especially on middle-aged individuals. The ridges form a diamond-like shape giving the turtle the distinct beautiful markings for which it is known.

While all terrapins look physically similar no two terrapins are exactly alike. Close examination of their face and neck skin reveals each turtles unique pattern of dark black spots dashes and broken lines on otherwise pale greenish-gray skin rather like human fingerprints.

What makes a turtle a turtle?

A turtle is a reptilian animal. Its body is shielded by a bony shell — a fused construction of flattened ribs and backbone on top; the carapace; and a rigid underside called a plastron composed of fused sternum bones comparable to bones on the front of our chest. Covering the bony carapace are large scales called scutes.

All turtles have some form of body covering though some species lack a solid bony shell including the oceanic leatherback turtle and various freshwater softshell turtles. Similar to people turtles also have hands and feet with respective fingers and toes. They have two legs each supported by a femur tibia and fibula bones; and two arms supported by a humerus radius and ulna bones. Who knew we had so much in common?

Unlike people a turtles bony jaws are covered by a keratin-rich growth called a rhamphotheca otherwise known as a beak the same as with birds. The edge of a turtles beak may be very sharp and with some turtles strongly serrated for cutting tough plant and other tissue. When mishandled a frightened turtle may be capable of delivering a painful bite.

Its a terrapins life

Never found far from brackish water and usually in and around salt marshes these aquatic reptiles sport strongly webbed feet that help propel them through their watery realm especially in search of small animals to eat including snails clams crabs and worms along with occasional bits of plant matter and carrion. A terrapin is able to crunch hard-shelled prey items with the aid of a thickened beak that extends into the roof and floor of its mouth acting like a nutcracker powered by strong jaw muscles.

A terrapins life cycle begins on dry ground as a leathery-shelled egg among a clutch of fewer than a dozen sibling eggs. The eggs are placed by an adult female most often in sandy soil located in dune habitats above the high tide line. Nesting terrapins may travel a considerable distance from their marsh home including into fringing uplands on the mainland a pattern that can bring them into harms way if they encounter roads.

After scooping out a small nest chamber with her feet the laboring female deposits her eggs then meticulously covers the nest before abandoning the site to the challenges offered by nature including vagaries of weather and the ravages of ground predators including raccoons foxes opossums rats and even dogs and cats. The eggs are also vulnerable to a number of snakes including eastern kingsnakes and black racers.

Developing eggs incubate for about eight to 12 weeks before hatching as 1-inch replicas of their parents. As with their cousins the pond turtles if the young hatch late in summer or early autumn they may remain in the nest until spring before emerging to find their way to the marsh where with good fortune they will dwell for 40 to 50 years or more.

Terrapins past present and future

Wild terrapin populations were once high enough in North Carolinas salt marshes to be a gourmet human foodstuff especially as the choice ingredient for the infamous soup Terrapin a la Maryland. In the late 1800s the United States exported hundreds of thousands of pounds of terrapin meat. The Great Depression later allowed for a small population recovery as terrapin meat was generally regarded as unaffordable thereby decreasing its demand.

A state and federal listing as a species of special concern as well as a spot on the North Carolina Wildlife Action Plan has enabled terrapins to continue to partially recover their stocks. However terrapin populations are in trouble today due to a combination of factors in and out of their salt marsh habitat: Adult female terrapins are killed in traffic on roads within nesting territories and untold numbers of all-age terrapins drown each year in fishing gill nets and blue crab traps.

Shoreline bulkheads are another terrapin challenge because these vertical walls placed at the interface of land and water can force terrapins to crowd-nest between bulkheads where the natural shoreline provides an accessible interface of land and water. Egg-eating raccoons and foxes are quick to find these nest congregations to the detriment of many if not all eggs involved.

Dire as the terrapins plight sounds this is no time for despair. Right now turtle conservationists are working with fishery managers to help the fishing industry develop and use terrapin excluder devices that will prevent adult terrapins from entering crab pots while not compromising crab catch.

Public education is another key strategy toward terrapin conservation success. Terrapins need everyones help including coastal residents and visitors who use recreational crab pots when terrapins are active. Its as easy as making sure crab pots are pulled from the water when not actively used.

Terrapins have survived the test of time living and thriving for thousands of generations in an ever-shifting coastal zone where ocean and land meet. As a species the resilient terrapin has instinctively persevered through millennia-scale changes in its environment because terrapins can adapt to slow change in their world. But what they and other species have trouble with is rapid change in their world; something we and the terrapin share in common.

In the constantly changing world in which we live a thoughtful disposition and instinctive desire for knowledge provides us with the capacity to contemplate our coastal affairs and take positive actions to assure our own thriving future.

We can learn something from little Malaclemys about resilience perseverance and fortitude character attributes that will serve us well in the future — as has been proven by this time-tested coastal turtle which otherwise goes by its Algonquian name torope the word for little marsh turtle or terrapin.

Turtle n. a water- or land-dwelling reptile of the order Chelonia with the body protected by a bony shell (carapace).

Tortoise n. a terrestrial turtle of the family Testudinidae with thick scaly limbs and usually a heavy shell.

Fully grown female terrapins reach a shell length of 7-9 inches and may weigh up to 2 pounds; male terrapins seldom reach more than 5 1/2 inches in length.

Diamondback terrapins are the worlds only turtle especially adapted to living in the relatively narrow brackish-water realm of coastal salt marshes and tidal creeks.

Following rain events diamondback terrapins have been observed drinking from the thin layer of fresh rainwater that collects on the surface of denser salty water.

The diamondback terrapin is one of about 330 species of living turtles worldwide compared to nearly 5 800 different kinds of lizards and 3 400 different snakes and 25 different crocodiles including the American alligator.

In early 1920s America a dozen adult terrapins could bring up to $90 an astounding amount equal to about $1 000 in todays valuation.

A turtles shell is actually its ribcage which explains why a turtle cannot crawl out of its shell except in cartoons.

Turtles are the only vertebrate animals with a pelvic girdle located inside its ribcage.

Diamondback terrapins have an unusually long incubation period of 61-104 days.

Volunteers interested in the North Carolina National Estuarine Research Reserve Terrapin Tally to Masonboro Island in May must have access to kayaks or canoes PFDs and smart phones and must attend a training session at the University of North Carolina Center for Marine Science 10 to 11:30 a.m. Saturday April 5 or 6 to 7:30 p.m. Thursday April 10. To register or inquire email [email protected]