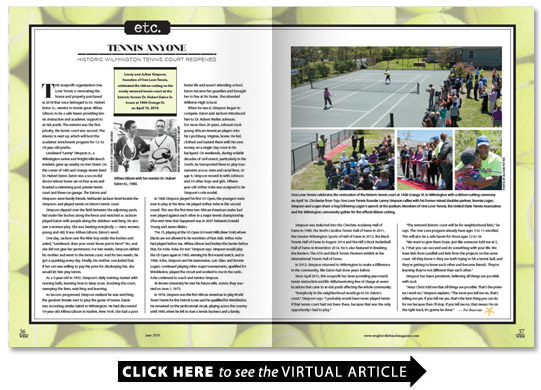 The nonprofit organization One Love Tennis is renovating the house and property purchased in 2018 that once belonged to Dr. Hubert Eaton Sr. mentor to tennis great Althea Gibson to� be a safe haven providing tennis instruction and academic support to at-risk youth. The exterior was the first priority the tennis court was second. The interior is next up which will host the academic enrichment program for 12-to14-year old youths.

Lendward “Lenny” Simpson Jr. a Wilmington native and Wrightsville Beach resident grew up nearby on Ann Street. On the corner of 14th and Orange streets lived Dr. Hubert Eaton. Eaton was a successful doctor whose house sat on four acres and boasted a swimming pool private tennis court and three-car garage. The Eatons and Simpsons were family friends. Nathaniel Jackson lived beside the Simpsons and played tennis on Eaton’s tennis court.

Simpson slipped over the field between the adjoining yards hid under the bushes along the fence and watched as Jackson played Eaton with people along the sidelines watching. He also saw a woman play. She was beating everybody — men women young and old. It was Althea Gibson Eaton’s ward.

One day Jackson saw the little boy under the bushes and asked “Lendward does your mom know you’re here?” No and she did not give her permission. For two weeks Simpson defied his mother and went to the tennis court. And for two weeks he got a spanking every day. Finally his mother concluded that if her son was willing to pay the price for disobeying her she would let him play tennis.

As a 5-year-old in 1953 Simpson’s daily training started with running balls learning how to keep score brushing the court sweeping the lines watching and learning.

As lessons progressed Simpson realized he was watching the greatest female ever to play the game of tennis. Eaton was recruiting similar talent in Wilmington. He had discovered 19-year-old Althea Gibson in Harlem New York. She had a poor home life and wasn’t attending school. Eaton became her guardian and brought her to live at his home. She attended Williston High School.

When he was 8 Simpson began to compete. Eaton and Jackson introduced him to Dr. Robert Walter Johnson. For more than 20 years Johnson took young African-American players into his Lynchburg Virginia home. He fed clothed and trained them with his own money on a single clay court in his backyard. On weekends during volatile decades of civil unrest particularly in the South he transported them to play tournaments across state and racial lines. At age 9 Simpson moved in with Johnson and 10 other boys and girls. Fifteen-year-old Arthur Ashe was assigned to be Simpson’s role model.

In 1968 Simpson played his first US Open the youngest male ever to play at the time. He played Arthur Ashe in the second round. This was the first time two African-American males had ever played against each other in a major tennis championship. (The next time that happened was in 2007 between Donald Young and James Blake.)

“I’m 15 playing at the US Open in Forest Hills (New York) where blacks are not allowed to be members of that club. Arthur Ashe had played before me. Althea Gibson had broken the barrier before that for Ashe. Ashe for me ” Simpson says. Simpson would play the US Open again in 1965 winning his first-round match and in 1966. Ashe Simpson and his teammates Luis Glass and Bonnie Logan continued playing other major tournaments qualified for Wimbledon played the circuit and worked to rise in the ranks. Ashe continued to coach and mentor Simpson.

At Brown University he met his future wife JoAnn; they married on June 1 1973.

In 1974 Simpson was the first African American to play World Team Tennis for the Detroit Loves and he qualified for Wimbledon. He remained on the professional circuit playing across the country until 1980 when he left to start a tennis business and a family.

In 2013 Simpson returned to Wilmington to make a difference in the community like Eaton had done years before.

Since April 2013 this nonprofit has been providing year-round tennis instruction and life skills/mentoring free of charge at seven locations that cater to at-risk youth affecting the whole community.

“Everybody in the neighborhood would go to Dr. Eaton’s court ” Simpson says. “I probably would have never played tennis if that tennis court had not been there because that was the only opportunity I had to play.”

“The restored historic court will be for neighborhood kids ” he says. The One Love program already have ages 5 to 11 enrolled. This will also be a safe haven for those ages 12 to 18.

“We want to give them hope just like someone told me at 5 6 7 that you can succeed and do something with your life. We have kids from Landfall and kids from the projects on the same court. All they know is they are both trying to hit a tennis ball and they’re getting to know each other and become friends. They’re learning they’re not different than each other.”

Simpson has been persistent believing all things are possible with God.